East India Company merchant Richard Wickham was the son of William Wickham a Bristol merchant.  He was appointed in December 1607 as a factor for the Company’s Fourth Voyage. In early 1609 he was taken prisoner by the Portuguese and taken to Goa and then Lisbon. Wickham managed to escape and returned to England.  He was re-employed for the Eighth Voyage led by John Saris and sailed for the East Indies in 1611 on board the Clove.  He went to Japan with Saris and remained as a member of  the newly-established factory at Hirado from 1613 to 1617 when he left for Bantam.  He died at Bantam on 12 November 1618 and a detailed inventory was taken of his possessions, a copy of which survives in the India Office Records. 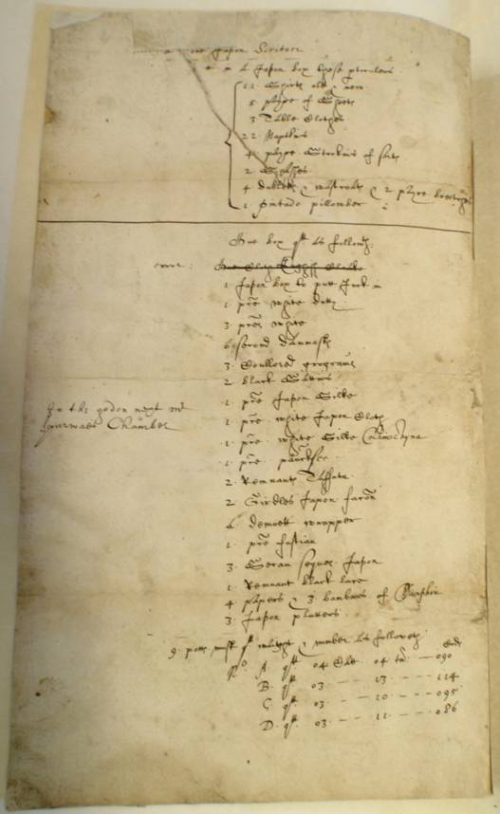 Here is a selection of Richard Wickham’s possessions in 1618 taken from the inventory:

From the list of his clothing, it appears that Wickham must have been a very snappy dresser!  He was also a keen collector of books and his will states that the proceeds from the sale of his books in Bantam were to be paid to the library in his home town of Bristol.

The value of Wickham’s estate from the inventory was £1,400 -  a vast sum in 1618. The East India Company was outraged, convinced that Wickham had gained his fortune by using its money to finance his own ventures or even by theft.  Wickham’s mother had to fight to have the estate made over to her by the Company but eventually won her case.