In Dickens’ Dombey and Son, we are introduced to Captain Cuttle who, in the grand tradition of fictional sea captains, has a hook where his hand should be.  A benign grotesque who uses his hook to comb his hair, Cuttle is a source of comedy both within the text and through the original Phiz illustrations, if only because these fail to ensure that his hook is always on the correct side.  Although false legs recur throughout Dickens’ novels, this sighting of a hook-handed character is a one-off and represents only a slice of the true variety of prosthetic arms and hands available to the Victorian amputee. 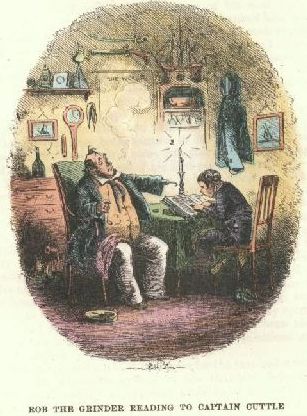 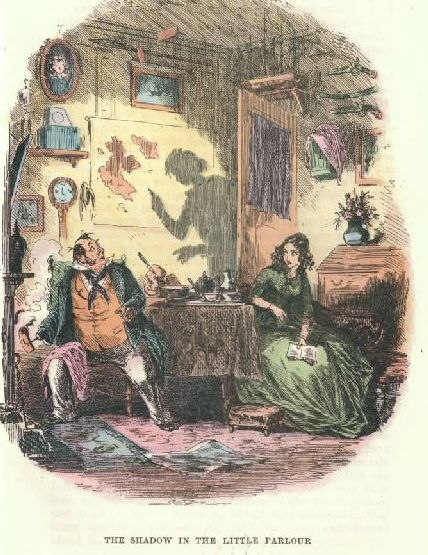 The development and improvement of false arms and hands over the nineteenth century was rooted in medical necessity, with both industrialisation and the Napoleonic Wars leading to a surge in amputation.  For the socially conscious novelist, a lost arm was an arresting image to employ, whether in the case of Gaskell’s Cranford, wherein amputation is a threat juxtaposed with the developing railway, or Dickens’ Barnaby Rudge, in which Joe Willet returns from the American Revolution conspicuously minus an arm.

Prosthetic arms of previous centuries had often been little more than unwieldy metal proxies (available to few but the most affluent) and early Victorian prosthetics offered similarly limited scope.  Whether made of metal, wood or leather, the more expensive false arms of the early nineteenth century were often simply jointed pieces of sculpture, providing only basic locking hand positions.  For the sake of practicality, many working class amputees instead opted for hooks and recycled grabbers, with the Smithsonian in Washington today displaying a Victorian artificial arm made from a gun barrel, operating with a lever to activate a claw.  Stewart Emmens, curator of Community Health at London’s Science Museum, notes that the working class Victorian amputee would be much more likely to get a hook fitted by a blacksmith than bother with a specialist limb-maker since professionally manufactured prosthetics, whilst easier on the eye, were more expensive and offered complicated methods of grabbing and flexing; movements essential to practical work.  Certainly, being fitted for a prosthetic in the early Victorian period seems to have involved a choice between style and substance, with a clear class line drawn between the two.

Technological development over the course of the nineteenth century worked to bring aspects of the aesthetic and the practical together in the prosthetic arm, although it was still not always possible to have both.  A false arm owned by London’s Science Museum (dated 1850-1910) displays great flexibility, with a spring-loaded elbow joint, rotating wrist and curling fingers.  It is also, however, something of a horror show, with a macabre skeletal claw which would presumably have been hidden by a glove.  Other prosthetics of the period attempted to solve practical issues in less technologically complex (and frankly visually bizarre) ways, with false arms occasionally coming with unscrewable wooden hands which could be replaced with cutlery, or sockets in the palm in which to fix pens – calling to mind a primitive Inspector Gadget.  Despite this, even advanced prosthetic arms remained limited, expensive and unwieldy throughout the nineteenth century and it was not until well into the twentieth that the development of lightweight materials and robotics made false arms unequivocally superior to the hook, both in appearance and functionality.

Hunter Oatman-Stanford, War and Prosthetics: How Veterans Fought for the Perfect Artificial Limb