Without a Leg to Stand On – Victorian Prosthetics

On 18 June 1815, Henry Paget, Marquess of Anglesey, was struck in the right leg by a cannonball at the Battle of Waterloo.  Immediate amputation above the knee was required. Paget exclaimed “By God, sir, I’ve lost my leg!”, to which Wellington responded “By God, sir, so you have!” before turning back to the field.  The leg was buried with its own tombstone, which still survives, and became a Belgian tourist attraction.

Paget subsequently wore an articulated above-knee prosthetic which came to be named after him.  The “Anglesey Leg” (later known as the “American Leg”) had been invented by James Potts in 1800.  It consisted of a wooden calf and thigh socket, connected by a steel knee joint and finished with a flexible foot connected to the knee with catgut tendons.  Potts’ design was innovative for several reasons – most notably the tendon system which allowed for greater foot flexibility – and was a significant early milestone in aesthetic and practical prosthetic development. 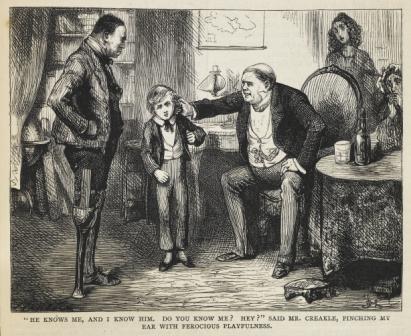 “Look at wooden legs.  If there was only one man with a wooden leg what a property he’d be!... If you was to advertise Shakespeare played entirely by wooden legs, it’s my belief you wouldn’t draw sixpence”

Wooden legs recur regularly throughout Dickens’ works, providing a piratical flourish to his most straight-faced of stories.  They are worn by Simon Tappertit in Barnaby Rudge, Mr Gamp in Martin Chuzzlewit, and Silas Wegg in Our Mutual Friend.  It is a preoccupation which speaks clearly of the regularity with which wooden legs and prosthetics were to be seen in Victorian society.  Adrienne E. Gavin has noted that Dickens, living in Chatham as a youth, would have been surrounded by the sailors and soldiers stationed there towards the end of the Napoleonic Wars and would consequently have seen large numbers of amputees and false limbs.

Most amputees of the time, whether soldiers or civilians, could be assured of some kind of replacement, however rudimentary.  In those pre-anaesthesia times, the process of first having the offending limb sawed off was an intimidating prospect and one with a mortality rate of about 30%.  Wealthy amputees could aspire to advanced prosthetics, known as “cork legs” (made in Cork Street), which offered jointed movement and expensive blends of materials such as ivory, steel, leather and vulcanized rubber.  The less fortunate had to make do with “peg” legs.  “Cork legs” developed a good deal over the course of the nineteenth century, with features such as ivory balls in rubber-socketed ankles for a fuller range of movement, whilst lightweight leather prosthetics were also developed which could be laced on like knee boots.  Advanced legs of this sort were not only superior in the natural movement they supplied but also were less liable than basic wooden legs to rotting and splitting mid-stride.

Some sporadic development of false legs continued into the American Civil War, which produced some 30,000 amputees, and again throughout World War I, but it was not until much later in the twentieth century that combined progress in mechanics, technology and surgical practice both advanced the quality and durability of prosthetic legs and lessened the overall need for them.

Another example in 'Our Mutual Friend' - the Greenwich pensioner at Bella’s wedding walks on two wooden legs.