Salim Rashid Suri (1910-1979) was an Omani Sowt singer and ‘ūd player who became famous as the ‘Singing Sailor’.  He developed a truly unique style which took influence from musical sources across the Middle East and India.

Suri’s passion for music was anathema to his family: his elder brother threatened to shoot him unless he stopped singing.  Fleeing to pursue the music he loved, Suri sailed with commercial ships to ports in East Africa, India and around the Middle East.  From the recordings and the testimonies of his children we can begin to piece together his life. 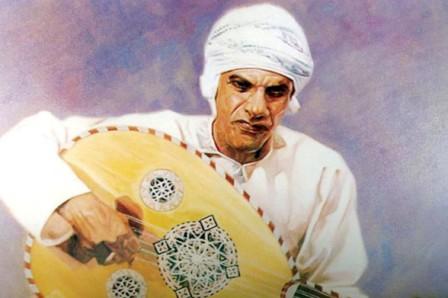 Salim Rashid Suri was born in Sur, Oman, though he spent most of his life in India, Bahrain and Kuwait.  He began by singing al maidan, a form of sung poetry, accompanying himself on a one-stringed drone instrument, but his reputation resides in his distinctive style of Sowt al Khaleej (‘Voice of the Gulf’), an urban form principally developed and performed by musicians from Bahrain and Kuwait.  Sur was a pivotal trade port connecting Oman with Yemen, East Africa, Zanzibar, India and ports along the coastlines of the Gulf and is still regarded as one of the main centres of traditional Omani music.  Undoubtedly, Suri’s development of the sowt tradition was influenced by the trade links animating the town.

Suri began working on commercial vessels in Sur, later visiting ports in Yemen, Iraq, Kuwait, Bahrain, India and East Africa.  He learned sowt from recordings of the singer Abd el-Latif al-Kuweiti (1901/1904–1975) and from other practicing musicians. His son, Sa‘id Salim Ali Suri, said of his father that ‘he left Sur with a good voice, but didn’t know how to sing’.  It was during his travels that Suri’s music developed and in Aden he first encountered the ‘ūd.

In the early 1930s Suri settled in India.  He lived in the port area of Bombay working first as a ‘boiler controller’ on a steamship before becoming a broker and translator helping Arab merchants to buy goods in Bombay and transport them to the ships.  He recorded twelve shellac (78 rpm) discs with HMV, which sold for around 50 Indian Rupees apiece.  Their commercial success was assured partly by the Arab population in Bombay, but also by his interest in Indian music and the use of Urdu in his songs.

Suri left India in the late 1940s and settled in Bahrain where he became a sought-after freelance artist.  By the 1960s, his own record label, Salimphone, recorded widely in the region with musicians such as Abd el-Latif al-Kuweiti and Mahmud al-Kuweiti.  However, because Suri’s records were only suitable for gramophones, the advent of vinyl records (45 rpm) in the early 1960s damaged his business prospects and he returned to Oman in 1971.  There he found work with the Sultan who made the singer a consultant for cultural affairs. Suri performed songs eulogising the ruler and his family which were widely broadcast on Oman’s recently established TV and radio stations.

Suri had come full circle.  As traveller and seafarer his music encapsulated the centuries-old cultural exchange of the Indian Ocean and Arabian Peninsula.  By the time he died in 1979, Suri was being hailed as an icon of the Omani nation for his contribution to sowt al-Khaleej.

This story is based on an interview with Salim Rashid Suri’s son, Sa‘id Salim Ali Suri conducted by Edward Fox on 21 November 1990 and subsequent email conversations between Rolf Killius and Sa‘id.

Sa‘id Salim Ali Suri is also a versatile musician and singer. He was born in 1954, received his main education in Bahrain and presently lives in Oman where he moved with his parents when he was eighteen years old. From 1975 to 1978 he studied music in Egypt.

Posted by Margaret.Makepeace at 08:15:00 in Arts and crafts , Domestic life , Journeys , Qatar , Work

If you have further information about Salim Rashid Suri and his family, please send a message to [email protected]