How often does a day spent in the British Library Manuscripts Reading Room lead to over ten years of research and three ground-breaking books?  Guest bloggers Derek Morris and Ken Cozens tell us about their in-depth studies of East London.

Some ten years ago Derek discovered the Martin-Leake papers in the British Library.  Analysis of the papers led him to make a major challenge to the established stereotypes which purport to describe London in the eighteenth century, and especially its eastern suburbs.  Traditionally the eastern suburbs have been associated with poverty, dirt, anarchy and crime, but Stephen Martin-Leake's papers and his account books suggested a different picture.

Derek was surprised to discover that Stephen Martin-Leake, the Garter King of Arms between 1754 and 1773, lived in Mile End Old Town, a hamlet in the great east London parish of Stepney.  Why was he living in an area of supposedly widespread social deprivation?  Further investigation revealed that Stephen Martin-Leake's neighbours included Captain James Cook, directors of the East India Company and Hudson's Bay Company, Fellows of the Royal Society, writers and artists, and wealthy merchants who traded all over the world.  The resulting book Mile End Old Town, 1740-1780 showed how an East London hamlet became a suburb with a strong middle-class element driving its development. 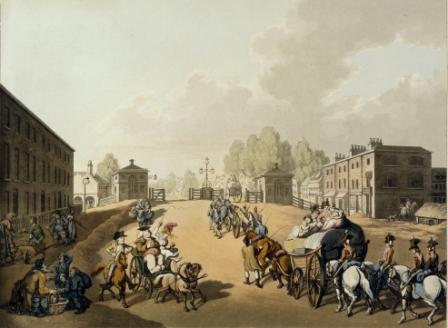 To extend the research into Wapping, a river-side parish, Derek cooperated with Ken Cozens, an expert on London's merchant networks in the 18th century.  Their book Wapping 1600-1800 showed the diversity of interests and occupations in the area using previously unexploited primary sources.  The use of land tax records and deeds at Tower Hamlets Local History Library led to further research being undertaken into Camden, Calvert & King's merchant network.  This group’s strong association with the supply of East India ships and transports for the Admiralty meant that leads from the India Office Records led to further primary sources being located at The National Archives.  All this culminated in an in-depth article on Anthony Calvert of Camden, Calvert & King.

The next area tackled was Whitechapel, which in 1750 had a population of 25,000, double the size of Hull, and equal in size to Glasgow and Liverpool.  Whitechapel 1600-1800 is the first detailed study of its social history.  Whitechapel was the home for millionaire timber merchants from Scandinavia; James Fisher the Secretary of the Protestant Association who helped to organise the petition that led to the Gordon Riots in 1780; and Daniel Fenning, a grammarian and prolific text-book writer.

Later this year Derek and Ken will launch London's Sailortown, 1600-1800 which explores the history of Shadwell and Ratcliff, two Thames-side areas that have seldom been studied.