The very definition of a ‘Hostile Takeover’

Early in 1626 two English East India Company ships, the Palsgrave and the Dolphin, captured a Portuguese galleon carrying horses between Muscat in Oman and Goa in India.  Smarting from a previous defeat by Portuguese ships in the Gulf near Dammam, the Englishmen proceeded to cut off the heads of Captain Antonio de Sera and his Portuguese sailors.  According to John Benthall, a factor stationed in Gombroon (Bandar Abbas), the heads of de Sera and his crew were then sent to Muscat ‘as a present to Ruy Ferera their cheife and cheife occasioner of their execution’. 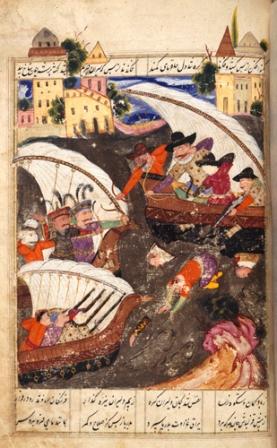 This act was apparently retaliation for the execution of English prisoners who had fallen into the hands of Ruy Freira de Andrade, a friend of the unfortunate Captain de Sera.  De Andrade had been in command of the fortress at Hormuz before its capture in 1622.  English factor John Purifie reported that after receipt of this grisly trophy de Andrade was ‘poisoned by his owne people’.  However the rumours of de Andrade’s death were somewhat exaggerated as he lived on into the 1630s!  What was reported later, and probably more accurately, is that the Portuguese in Muscat were gripped by panic, fearing a threatened invasion by the Persian Shah Abbas I with English and Dutch assistance.  This was not unreasonable considering the defeat of the Portuguese at Hormuz a few years previous, the constant harassment of their shipping by joint English and Dutch fleets in the Gulf and beyond, and repeated threats by the Shah.  At the same time, there were reports of the Persians keeping Carmelite friars under house arrest at Shiraz in an attempt to gain the release of Persian soldiers taken prisoner by the Portuguese.

The indication that prisoner exchanges were a viable option serves to accentuate the violence of the English in this episode.  The bloodthirsty treatment of its European competitors shows us a darker side to the ‘Honourable’ English East India Company.

Posted by Margaret.Makepeace at 09:00:00 in Conflict , Journeys , Money , Politics , Qatar