A unique illustrated broadside in the British Library’s collections shows the courtesan Fanny Murray (1729-1778) in two guises. In one woodcut she appears ‘in her primitive innocence’, which in this case means a fashionable gown designed to demurely cover her charms. She holds a sheet of music in her hand and a fan and a book lie on the table before her.  This is an image of a genteel and accomplished young lady. 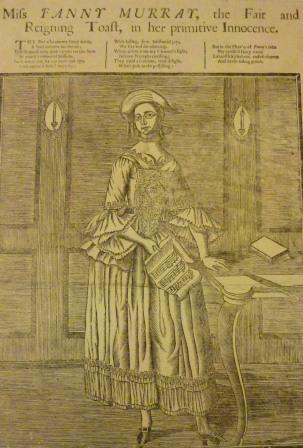 Fanny Murray ‘in her primitive innocence’

The woodcut is accompanied by verses which point a moral. Above the picture the lines refer to youthful, happy love. Below, they describe Fanny’s haughty disdain towards would-be lovers and how as she ages and loses her beauty they desert her, until she is forced to turn ‘monstrously devout’.  The stomacher and fichu of her dress appear to be English in style. They resemble those in her well-known mezzotint portrait, which must have had a wide circulation given Fanny Murray’s undoubted celebrity.

In the other woodcut, titled the ‘Careless Maid’ she is dressed en deshabille and has her skirt hitched up to adjust her garter. Her neckline is low and she shows a great deal of leg. She is, apparently, standing before her dressing table. This is an image of the courtesan preparing for work. 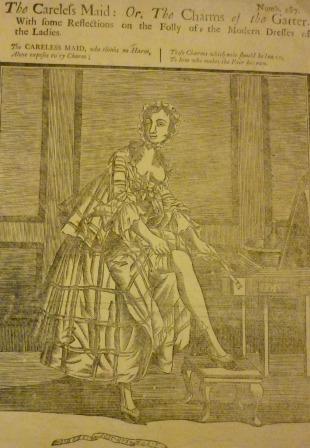 The text below compares and contrasts the fashions of English and French women. ‘Elegant Shapes have always been reckoned the peculiar Perfections of English women’, it begins. French ladies ‘invented a Dress to disguise the Shape’ in a bid ‘to hide the Defects of Nature’. Neatness, shown by ‘good Linen, and a great deal of it about their Persons’ is among the excellences of English women. French ladies, on the other hand, favour the latest fashions ‘dingy Gauze, taudry Ribbons, Peten-lairs, Negligees, Sacks, Half-Sacks, and Bed-Gowns’. Miss Murray appears to be dressed in the French style, with a ‘Peten-lair’, a short jacket with a sack-back, over a ‘Negligee’ if not a ‘Bed-Gown’.

She must also be advocating the advice in the text on how to become a ‘compleat’ French lady. ‘

1st. The free Privilege of receiving in their Beds all Visits, as well from their Male as Female Acquaintance.

2dly. A sufficient Number of Male Bedmakers and Valet de Chambres, for their own personal and particular Service.

4thly. The free Liberty of talking aloud in publick Places of, and laughing at, the Amours of Men, and more particularly those of their own Husbands.

5thly. The full Privilege of openly gartering up their stockings in all publick Assemblies, without being so much as obliged to turn about towards the Wall.’

And 6thly. The free use of the Jordan in all mixed Companies whatever.’

Fanny Murray was definitely in the forefront of fashion, both in her dress and her behaviour.