Why did the Thames freeze over then and not now? There are two main reasons: the temperatures were lower on average and remained lower for longer periods, and the architecture along the river was different, slowing down the water’s flow. The Old London Bridge was a stone building with nineteen arches, and all piers under the bridge were equipped with breakwaters to protect the bridge and the houses on top of it from the full force of the water. The river’s path was thereby slowed down, enabling the river to freeze in the right conditions. When the Old London Bridge was replaced in 1831 with a newer model with only five arches, the water was able to flow much faster, and the river never froze again near the centre of London. 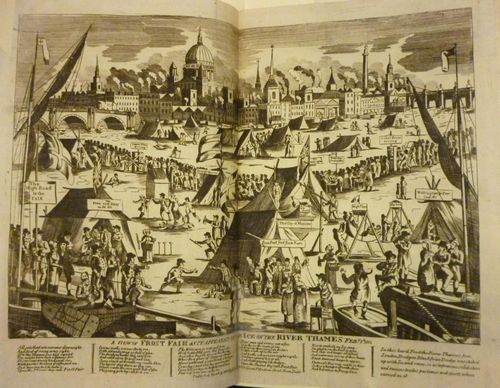 Frost Fair on the River Thames

When the ice on the river was solid enough Frost Fairs were held between the Old London Bridge and Blackfriars Bridge. The Fairs were spontaneous parties on the frozen river, and large numbers of people joined in. Tents were erected, made up of blankets held up by disused oars. There were temporary pubs on the ice with names such as ‘The City of Moscow’ or ‘The Wellington’,  whole oxen were roasted, and people could enjoy entertainments such as bull or bear baiting, roundabouts, and puppet-shows, or play football or other games. Of course not everyone was pleased and in the mood for a party when the river froze over. The watermen who usually ferried people across the water by boat did of course have to continue to make a living and therefore charged anyone who wanted to cross the frozen river. 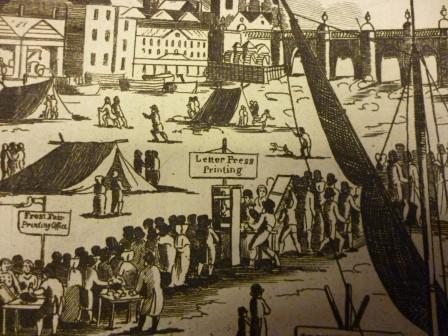 Frost Fairs were occasions to remember, and printing presses were brought on to the ice to print souvenirs for people who had visited them. In 1814 two types of presses were installed on the river, a hand-press for letterpress printing and a copperplate printing press. The British Library has a number of examples of these souvenirs which were ‘printed on the ice on the River Thames’ from all recorded Frost Fairs. The printing presses are very clearly visible in contemporary illustrations, showing that they were very much part of the occasion. In 1814 there was a 'Frost Fair Printing Office’ with a large crowd of people surrounding the letterpress printing press. The souvenirs usually contain a decorative border, a poem or other short text, and the visitor’s name. 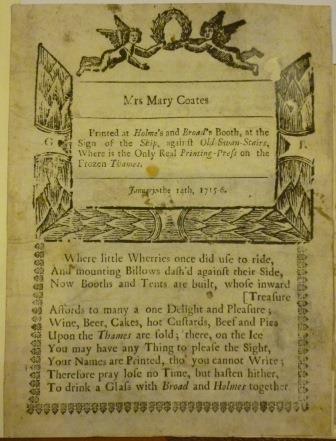 We definitely wouldn’t bring old-fashioned printing presses on to the river if it did freeze again now, but I’m sure we would take pictures of each other and have other little souvenirs produced which would remind us of the once-in-a-lifetime visit to the frozen River Thames.

Illustrations taken from From A collection of bills, cuttings from periodicals, prints, etc. illustrating the fairs held on the Thames, during the winters of 1683-4, 1814, etc - reference 840.m.27.(1.)

Posted by Margaret.Makepeace at 09:00:00 in Arts and crafts , Domestic life , Georgians-revealed , Leisure