On 27 January 1859 in the Kronprinzenpalais in Berlin, Prince Friedrich Victor Wilhelm Albert Hohenzollern – Queen Victoria’s first grandchild– was born with his left arm around his neck.  It took three days for anyone to notice the arm had been damaged, but it was a problem which the future Emperor of Germany and King of Prussia would spend the rest of his life trying to conceal.

Prince Wilhelm was left with Erb’s Palsy after a protracted breech birth during which the two attending doctors were hamstrung by royal etiquette forcing them to work beneath the mother’s skirts, and the message summoning Berlin’s foremost obstetrician got lost.  Permanent withering of the arm was probably caused by damage done to the nerves in his arm and neck by the forceps which dragged him out.  Born blue, he was initially presumed dead and only brought round by vigorous rubbing which probably only made the nerve damage worse.  It has often been speculated that oxygen deprivation at birth also left him with minor brain damage, a theory which certainly would explain the unstable personality for which he would become infamous.

In early infancy, it became clear that the young Prince’s left arm was not growing properly.  His left hand was a claw and the arm a shrunken dead weight. Physical prowess was prized amongst the Prussian royals, so from the age of six months the Prince began to undergo arcane but undeniably imaginative treatments intended to fix his damaged arm.  Some treatments were inoffensively useless – the arm was sprayed with seawater, massaged and wrapped in cold compresses – but others were more macabre.  The practice of weekly “animal baths”, which essentially required the arm to be shoved inside the carcass of a freshly killed animal so that the heat might galvanise the shrivelled tissue, was thought by Queen Victoria to be revolting and idiotic.  The method of binding the young Prince’s good arm to his body so that his left arm would “have to work” did little except compromise his balance, whilst drastic electric shock therapy was administered when he was barely a year old.  At the age of four, he was placed in a body-stretching machine akin to a medieval rack to correct the various muscular problems that had developed in his neck and shoulders. 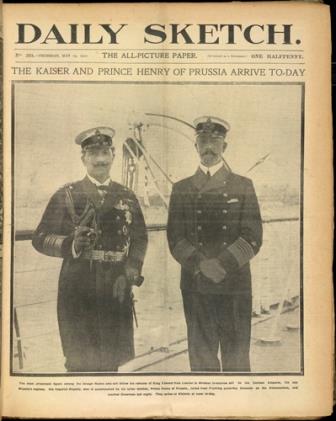 'The Kaiser and Prince Henry of Prussia arrive to-day'. Report for Thursday 19 May 1910. Image taken from Daily Sketch. Images Online

As an adult, the Kaiser was semi-successful in hiding the withered arm.  In formal pictures, he typically posed with his left hand resting on his sword with the right on top, and with gloves to provide distraction. His clothes were tailored with higher pockets to disguise the length of his left arm and he grew adept at shooting and riding with his right arm.  Historical videos show passable movement in his left arm and a 1915 edition of the Toronto World even claimed that  “a series of string and cords, acting like muscles…connected with the good muscles of the shoulder most adroitly, enable him to impart to it movements that are almost life-like”.  The Kaiser’s physical deficiency has often been identified as the key to his lust for military and imperial power and it is interesting to speculate on the course European history might have taken had he not had such a traumatic entry into the world.