Who wants to be a millionaire? Angela Burdett-Coutts and the man who wouldn’t go away

Being the richest woman in Victorian England had its drawbacks.  In Anthony Trollope’s novel Doctor Thorne (1858), Miss Dunstable, with a fortune of £200,000, has to fend off marriage proposals from a horde of ambitious young men-about-town.  She soon learns the art of saying no.  As Trollope beautifully puts it: ‘she was already quite accustomed to being the target at which spendthrifts and the needy rich might shoot their arrows: accustomed to being so shot at, and tolerably accustomed to protect herself’. 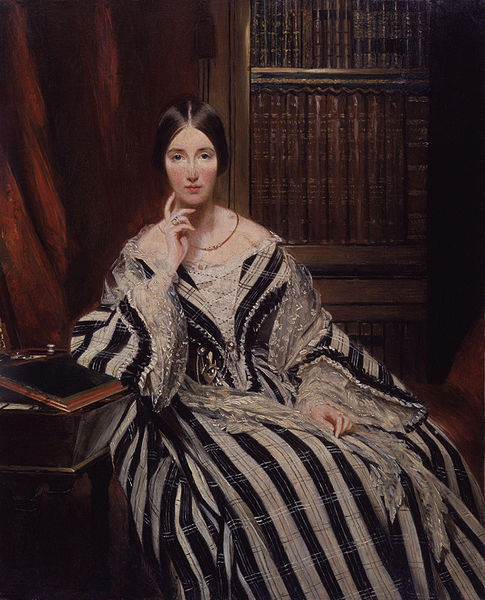 Angela Burdett-Coutts, heiress to the Coutts banking fortune of £1.8 million, also had her full share of unwanted proposals.  She and her companion Hannah Browne quickly developed a routine for dealing with them: ‘Mrs Browne went into the next room and left the door open, and then the proposal took place, and immediately it was done Miss Coutts coughed, and Mrs Browne came in again.’  But some suitors could not be shaken off so easily.  Richard Dunn, a bankrupt Irish barrister, stalked her obsessively, pursuing her all over England and even breaking into her house.

The British Library acquired Angela Burdett-Coutts’s archive in 2006, and we have now acquired a further file of papers containing some of the marriage proposals that made her life a misery.  ‘My Dearest and Most Beloved Miss A.B. Coutts’, writes John Mullinix in 1843, ‘I am a respectable Creditable young Gentleman of Estated Property, hoping you will consent to accept of my Hand and Heart .. Your reply shall have my best attention’.  Another suitor writes in 1846 with admirable brevity: ‘Being desirous of getting married, will you do me the very great happiness of accepting of my hand and heart, who shall love you night and day long’.

The threat of legal action was generally enough to send these young hopefuls packing.  But some continued to buzz around Miss Coutts like flies circling around a honeypot. The most persistent of all was Evan Harris Greene, who kept up an interminable stream of letters and poems professing his undying love and declaring that he was ‘headstrong as a thunderbolt’.  ‘No anxiety distresses me nor does a single doubt perplex my mind.  Should it be in reserve for me to enjoy such unspeakable happiness, I would have no hesitation in confiding to your pure and chaste bosom the inmost secrets of my heart.’ 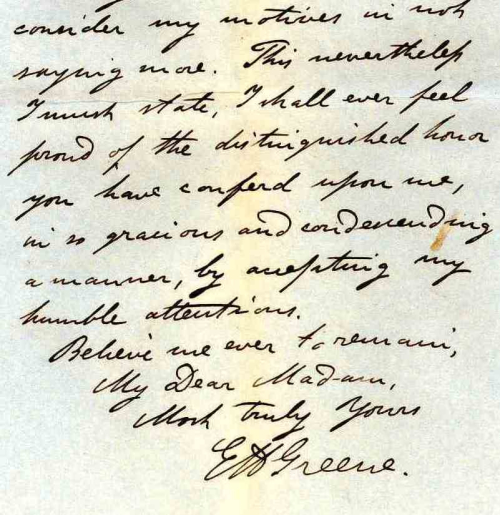 Like an annoying fly, Greene simply would not be swatted away.  When his letters were returned to him unopened, he sent them to the Duke of Wellington asking him to forward them to Miss Coutts.  Wellington sent them back with a testy letter: ‘The Duke is not Miss Coutts’s Private Secretary; nor is he the Post Man; nor has he any Relation with the General Post Office!’  Undeterred, Greene wrote back thanking Wellington for ‘the highly distinguished honor and advantage of His Grace’s notice’.  There is a brief glimmer of self-awareness in a letter of 1851, when Greene admitted that ‘the statement of my belief only causes it to be considered I am half witted.’  But it took another twelve years, and two legal actions, before he finally abandoned his pursuit.

As for Angela Burdett-Coutts, she remained unmarried until 1881 – and then, at the age of sixty-six, married a man less than half her age.  The marriage caused a scandal in Victorian society; Queen Victoria called it ‘the mad marriage’.  But perhaps these letters give us a glimpse of her motives.  Having been pestered all her life by men promising her their hand and heart, she can have had few illusions about romantic love.  Like Trollope’s Miss Dunstable when she finally contemplates matrimony in Framley Parsonage, perhaps she was ready to settle for friendship instead.

Posted by Margaret.Makepeace at 09:00:00 in Domestic life , Money