Continuing with the series on William Henry Fox Talbot (1800-1877), we look here at his lifelong interest in botany and some of the items now available to researchers through the British Library catalogue.

Botany was one of Talbot’s favourite fields of study although he pursued it only as an occasional interest. Nevertheless he was extremely knowledgeable and held in high regard. In 1829 he was elected to the prestigious Linnean Society, today one of the oldest active botanical societies in the world. Talbot was also a member of the Horticultural Society of London, the Royal Botanic Society of London, and the Botanical Society of Edinburgh.

From the age of 14, Talbot maintained a lively correspondence with eminent botanists such as Lewis Weston Dillwyn (1778-1855) and Sir William Jackson Hooker (1785-1865), and later with Reverend James Dalton (1764-1843). Talbot’s particular interest at this time was British mosses, an extremely demanding taxonomic speciality.

In 1823 and 1826 Talbot chartered expeditions to Corfu and the Ionian Islands collecting plants which he then spent the following years studying and classifying. One of the plants discovered on these expeditions ‘Sideritis purpurea Talbot’ still bears his name as does ‘Talbotia elegans Balfour’ named years later in his honour by the Scottish botanist, Professor John Hutton Balfour (1808-1884). Below is part of Talbot’s list of plants collected for either Sir William Jackson Hooker or his son Sir Joseph Dalton Hooker (1817-1911). 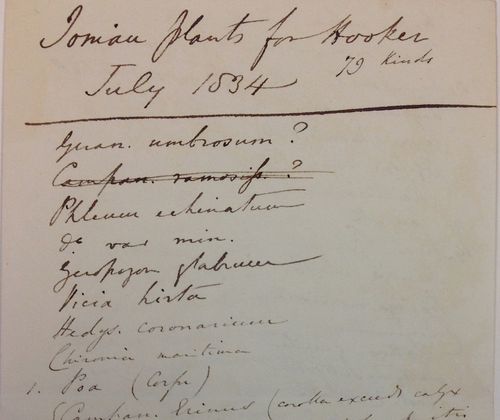 Talbot was also interested in botanical specimens collected by others and he often exchanged notes, seeds and herbaria with other botanists, both amateur and professional. He also maintained a small botanical garden at Lacock Abbey, his family home in Wiltshire, where he grew many of the seeds and plants he received. Below are several examples showing his enthusiasm for collecting plants and seeds from different parts of the world as well as his keen interest in studying them. 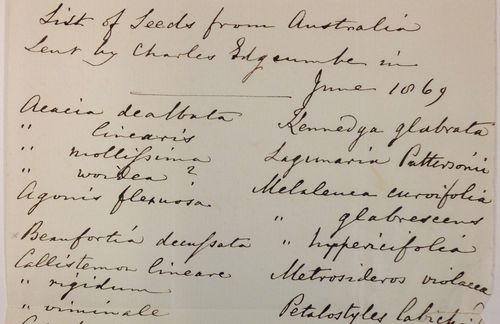 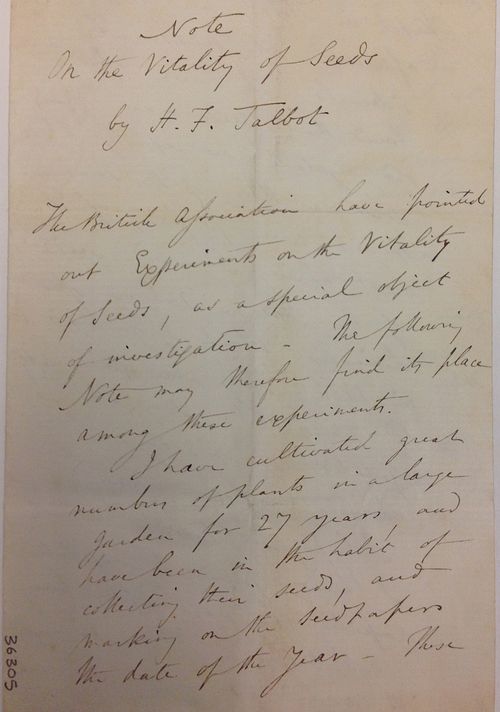 MS 88942/1/364 Talbot’s note on the vitality of seeds, created, as he records, in the interests of the British Association (for the advancement of Science)

One of the least known facts about Fox Talbot is his role in the preservation of the Royal Gardens at Kew. 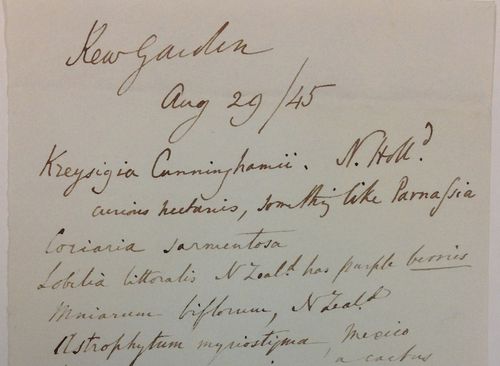 In 1837 the Royal Gardens at Kew, whose greenhouses contained many rare and exotic species of plants, were under threat of being turned into vineries. As the decision would need parliamentary approval Talbot, on the advice of Thomas Spring Rice, Chancellor of the Exchequer, persuaded the Council of the Linnean Society to petition the House of Commons so that the gardens might be preserved as a national botanic garden. This was granted in 1840 and the Royal Gardens at Kew were saved.

Posted by Margaret.Makepeace at 09:00:00 in Journeys , Science and environment