While putting together the Comics Unmasked exhibition, it became clear that the 1880s were something of a high point in British comics history. The popular magazine Fun was just one of several that were regularly carrying single-page comics at this time. It’s ‘British Workman’ stories, written and drawn by James Francis Sullivan (c. 1852-1936), are particularly enjoyable because they show that the Victorians were as interested in discussing class differences as we are. The jokes are often still funny for us today, as in the case of the clock-watching painter who barely gets any work done at all. 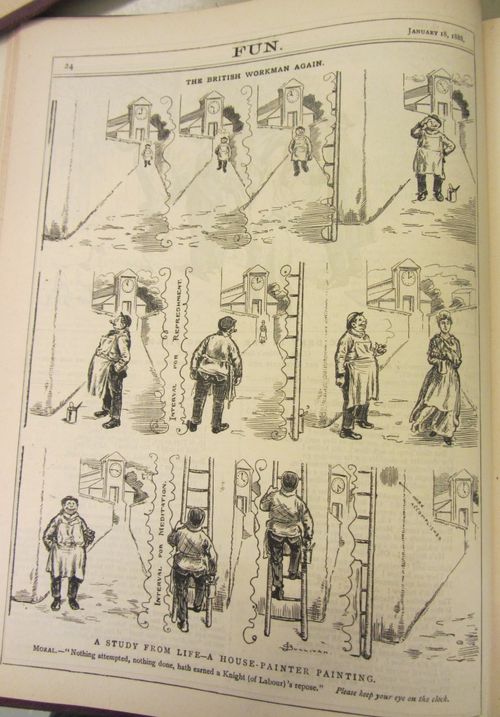 Less well known to comics historians are the stories that appeared in the Christmas issues of papers such as the Illustrated London News and The Graphic. My co-curator Paul Gravett had heard about these through the grapevine, but hadn’t had the opportunity to examine any of them. It appears that some libraries in the 19th century didn’t retain the Christmas specials, maybe because they contained stories for family reading rather than the usual news and current affairs. Fortunately, we do have them at the British Library.

The Christmas 1884 number of the Illustrated London News, for example, contains a wonderful colour comic entitled ‘Rouge et noir … from Miss Pettifer’s Diary’, (writer/artist not known) in which we follow the social life of a high-society lady as she attends balls and shooting parties. 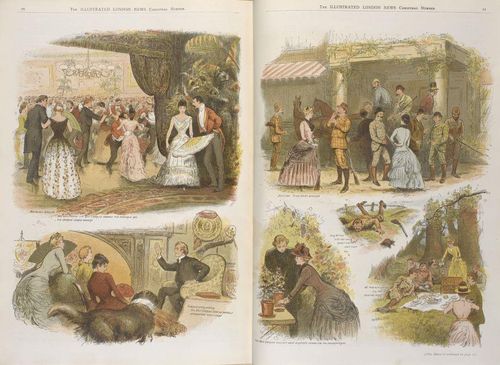 Similarly, The Graphic Christmas 1889 issue contains the ‘The girl with thirty-nine lovers’. This focuses on the experiences of a correspondent (a Miss E.H. Townsend?) who reports that she was pursued by 39 gentlemen while on a sea voyage: an adventure that she turns into a poem with sketches, and which William Ralston (1848-1911), a staff artist at The Graphic, then makes into a comic.

Together, these Victorian comics provide an interesting insight into the lives, values and aspirations of people in Britain in the 1880s. They also show that humour can sometimes work across the decades.

Book now for Comics Unmasked: Art and Anarchy in the UK, at the British Library until 19 August 2014.

Posted by Margaret.Makepeace at 09:00:00 in Arts and crafts , Comics-unmasked , Domestic life , Leisure , Work

Thank you for this excellent post! It's great to be able to see these pages...