Skulduggery in Bengal – a case of fraud

During the period of the British Raj in India, members of the Indian Civil Service often oversaw the governance of huge areas of territory. Most discharged this responsibility with great diligence and hard work, but from time to time examples of that responsibility being abused would come to the attention of Government. Such is the case of Walter A Macleane, a member of the Bengal Civil Service and Assistant Superintendent of Dehra Dun. A file in the India Office Records contains correspondence and an official report on the case, and an extract published in The Pioneer newspaper. 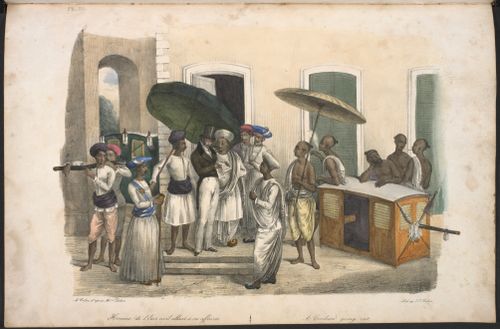 Walter Macleane arrived in Dehra Dun in March 1876 to take up the position of Assistant Superintendent. By most accounts he was somewhat eccentric in character, maintaining a lavish lifestyle, and regularly entertaining guests. He told people that he had a private income, and was married to a Parisian actress who shared her considerable fortune with him. He pursued his official duties in a similarly unique fashion. F M Lind, Commissioner of the Meerut Division, in his report on the affair, describes one occasion when an Indian gentleman asked Macleane for a licence to carry a gun. “Mr Macleane asked him if he had a gun, and the man replied in the negative, and stated that he would get a gun after he got his licence. Mr Macleane at once presented him with a double-barrel gun by Henry.”

In July 1876, Macleane left Dehra Dun on leave giving the reason of urgent personal business in Calcutta. He travelled to Allahabad, and then to Bombay where he disappeared. Not long after his departure from Dehra Dun, serious financial misdeeds came to light. Earlier in the year, Macleane had deposited two envelopes with the Mussoorie Bank, one containing his deed of covenant with the Secretary of State for India. The other envelope, which was sealed, he claimed contained deeds to his property in England valued at £6,000. The Manager of the Bank, Mr Hobson accepted these envelopes and allowed Macleane to negotiate bills amounting to £1,000 (or about £48,000 today) against the property in England. Bills were also negotiated with the Mussoorie Branch of the Delhi and London Bank. These bills he subsequently cashed at Coutts & Co and other firms.

Soon after Macleane’s disappearance telegrams arrived from England indicating that his bills had been dishonoured, which caused Mr Hobson to have the sealed envelope, which Macleane had deposited at the Mussoorie Bank, opened. Instead of deeds to property in England, it merely contained a price list of wines and some old circulars of the Board of Revenue! The Correspondent at The Pioneer observed that Macleane’s “great art lay in making himself appear to be perfectly careless about money matters, and without any idea as to the value of that medium of exchange…But he was a very sharp fellow indeed, and this pretended carelessness was the very best bait he could have thrown out, as pretty sharp people bit at it readily, thinking they were making a good thing out of him…One cannot pity people of this kind much”.

Absence without leave of W A Macleane, Assistant Superintendent of Dehra Dun in the North Western Provinces, and his dishonest conduct - recommendation of his dismissal from the Bengal Civil Service, 1876 [IOR/L/PJ/3/1118 No.131]