Can an Englishman become truly Indian? 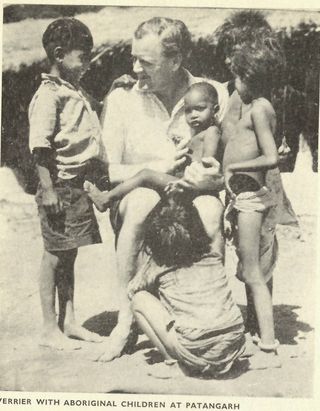 Many 19th century anthropologists regarded non-European societies as specimens of the primitive stage of human evolution to be studied as ‘fossils’ of prehistory, a view abhorred by Verrier Elwin (1902-1964), one of the rare European anthropologists to assimilate into non-European society in order to have a thorough understanding of the other peoples. An Oxford-educated theologian turned anthropologist, born into the family of a clergyman, Elwin joined the Christian Service Society mission to India in 1927. In the course of his proselytising, he converted himself to an ‘Indian’ (but not quite Hindu).

Elwin had unconventional political views; influenced by Mohandas Gandhi, he was a staunch supporter of Indian independence. In a Christian tract Christ and Satyagraha, he writes, “…it is love that drives me, an Englishman, to be a supporter of Indian nationalism...”.  A fictitious conversation among the natives in one of his novels (p.45, A Cloud that’s Dragonish, 1938) explains his thoughts: “What are the English [in India]?”  “Robbers and thieves!” Following the natural course of development, he took Indian nationality after Indian Independence. 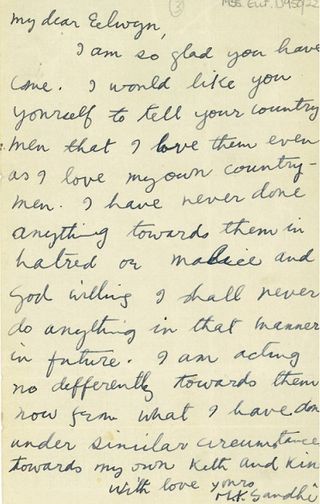 Elwin could have married an Englishwoman of class and rank that suited his family background, but instead he followed Gandhi’s advice and married an indigenous Indian woman of the Bison-Horn Maria tribe, in the region of the Satyagraha Ashram. He lived in a hut with glassless windows, from which the villagers came to peer at him as if he was a new species of homo sapiens. He made humorous remarks about the villagers of the Ashram, “Not all are as simple [as they appear to be].  One of them said to me the other day, ‘Love must be Ontological.  I can never think of love as Epistemological’ ”. 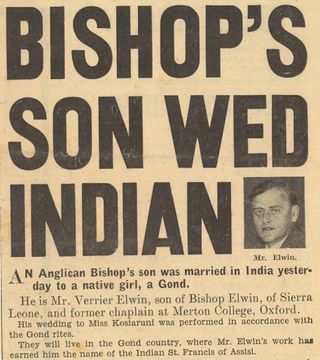 By marrying a native woman, Elwin acquainted himself with the local customs of love and sex, as well as the physical and psychological state of their well-being.  Among his personal papers at the British Library, a cutting from the Daily Mirror shows clear curiosity about his unusual life, but refrains from comment.

In 1940, The Illustrated Weekly of India published an interview with his young wife Kosibai who claimed that Gond women had a very privileged position, with the paper suggesting that “many a feminist might well envy them”.

Kosibai, wife of Verrier Elwin, pictured for her interview with The Illustrated Weekly of India, September 08 1940

Elwin wrote several scholarly books on the Gond tribes in India, including an interesting book on the aspect of ‘Murder and Suicide’ among them.

Elwin’s death in the early 1960s provoked some controversies as to the validity of his anthropological studies.  Some dismissed his studies as “a bit of propaganda for his continued support by the [Indian] Government”. Much of the criticism can be attributed to certain academic rivalry and cynicism from his contemporaries. The question remains, “Can an Englishman ever become truly Indian?”

Posted by Penny Brook at 09:00:00 in Domestic life , Journeys , Science and environment , Work