This year we are commemorating the heroes of World War One – millions from across the globe fallen and wounded . Thinking of the conflict, we have a vision of trenches, gas poisoning, and air strikes. But documents in the India Office Records show how officers and NCOs of the Indian Army met their fate in many different ways.

Most were killed in action. The actual resting place is often unrecorded: against many names there is simply Belgium, France, or East Africa. A total of 1,214 British officers serving in the Indian Army died between 1914 and 1921. Of these, 631 were killed in action and 163 died of wounds before the Armistice.  A further 84 died between November 1918 and September 1921. 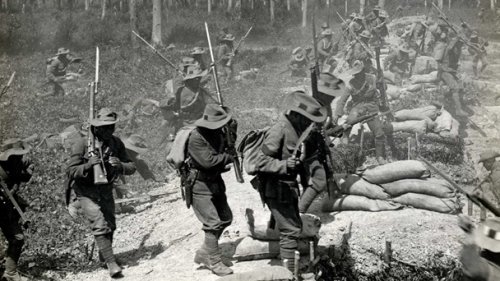 Major Gerald Alister Jamieson of the 9th Bhopal Infantry made it back to India after the campaign in Mesopotamia, but succumbed to his wounds a few months later in February 1916.  His fellow officers fighting in the Middle East faced heat stroke (Sub Conductor Reginald F. Goodhand), explosions (Lieutenant Arthur R. Waddams), and burns (Warrant Officer Alfred G. Hawken).  Nearly 80 officers went missing, mostly at sea. One major incident for the Indian Army was the sinking of the S. S. Persia.

Before the peace was signed, 111 officers died of natural causes, with 43 more in the next three years.  Pneumonia and enteric fever were the most common with 21 and 17 casualties respectively.

During the four years of the conflict, 32 died as a result of accidents.  Lieutenants John W. A. Merk, Arthur N. Peckham and Frederick R. Wilkinson fell from horses.  Major General Sir Henry Macandrew died as a result of accidental burns. Lieutenant Frank H. Robertson died in a plane and eight others were accidently shot. Captain Louis P. Gagliardi, Major John O’Leary, Lieutenant Reginald F. D. Plunkett all drowned. Lieutenant Brunton of the Sappers and Miners died in a motorbike accident.

A total of 20 deaths were the result of suicide, alcohol, or poisoning.  All four suicides after the Armistice were committed in Egypt.  Captain Wilfred C. R. Savage died of melancholia in London and Major Arthur S. Noake was lost overboard because of 'delusional insanity'. Captain Eric Cummings and 2nd Lieutenant Edward J. Brown were poisoned. Captain Arthur H. M. Wilson was killed when he fell through a weak roof.

The first officer of the Indian Army who lost his life on the Western Front was Lieutenant Thomas de Burgh, who fell on or about 17 September 1914. The last was 2nd Lieutenant Thomas J. Mander, who killed himself just two days before the Armistice. The youngest casualty was just 18 and there were 12 officers who died under the age of 20. The oldest to die was 60 year old Colonel Gervase F. N. Tinley, the Base Commandant of Marseilles.

IOR/L/MIL/14/142 Alphabetical lists of casualties by death among British officers of the Indian Services in the Great War, giving rank, age, unit, date, place, and cause, 1914-1921.

Posted by Margaret.Makepeace at 09:00:00 in Health , Journeys , World War One