Queen Anne, last of the Stuart line of monarchs, died on 1 August 1714.  Three hundred years later, she is still brought to mind through the expressions ‘Queen Anne is dead’ and ‘As dead as Queen Anne’.

‘Queen Anne is dead’ is a response made to someone who has relayed stale news or stated the obvious.  One explanation of the origin of this rejoinder is that the Queen’s death was kept quiet until the Hanoverian succession was assured.  However news leaked out and so by the time an official announcement was made the death was already common knowledge. 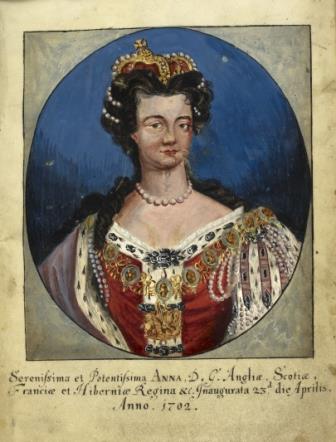 The phrase ’As dead as Queen Anne’ appears frequently in articles and letters in the British Newspaper Archive.  It is used to describe a surprising number and variety of concepts, objects and creatures: women’s suffrage, Irish partition, Sunday closing, sewage disposal, square dances, insects, weed control with corrosive acid, and the traditional social order.

Queen Anne’s funeral effigy can be seen in the museum at Westminster Abbey. Effigies were modelled from actual death masks and used at the head of funeral processions, then placed for a time above the tomb.  They are still dressed in original clothes belonging to the dead person.

In 1928 the Abbey’s display of effigies was the subject of newspaper articles. It was said to be ‘the grimmest waxwork show in the world’, more frightening than the new Chamber of Horrors at Madame Tussaud’s.  Eleven wax effigies stood ‘staring pallidly at each other’.  King Charles II was ‘a strange figure, with his little fierce black moustache, piercing eyes and claw-like hands’.  An Abbey guide remarked that the death-mask of Queen Elizabeth Tudor was the one true portrait of her, being the only one that did not seek to flatter. He added ‘There is proof that Queen Anne is indeed dead, for here is her death mask’.

King William and Queen Mary were shown as they appeared at their coronation.  William’s effigy was standing on a cushion which he had ordered to raise his height and bring him level with his taller wife. A child visitor pointed to the couple and exclaimed ‘”Daddy put a penny in, and make them jump about”.

Although Nelson was buried at St Paul’s Cathedral, his effigy was given to the Abbey.  The Admiral’s blind eye had been cleverly reproduced and there was a large pin on the shoulder of his Navy uniform to mark the site of his fatal wound.

The Duke of Buckingham held a gold walking stick and wore long-toed white shoes.  His face was ‘extremely pale, depicting a consumptive’.  The Duchess of Richmond, said to be the model for Britannia on coins, was accompanied by her stuffed pet parrot.

The fragility of the clothing was described, the once fine lace, rich furs and velvets ‘in many cases hanging in shreds, dusty and faded’.   Yet the London correspondent of the Evening Telegraph found the effigies ‘so lifelike that they are most uncanny.  One begins almost to suspect that life is not altogether extinct in those silent figures that stare through the dusty glass of the cases containing them’.

Posted by Margaret.Makepeace at 09:00:00 in Arts and crafts , Leisure , Politics , Religion