In April 1901, a few months after her father’s accession to the throne as King Edward VII, Princess Victoria was involved in a confrontation at Windsor Great Park.  The Princess was riding her bicycle with Lady Musgrave through the gates to the Long Walk when the elderly lodge keeper shouted at them to stop - cycling was not permitted there.  As the two women did not seem inclined to obey his order, he caught hold of the Princess’s bicycle and she fell heavily onto the roadway. 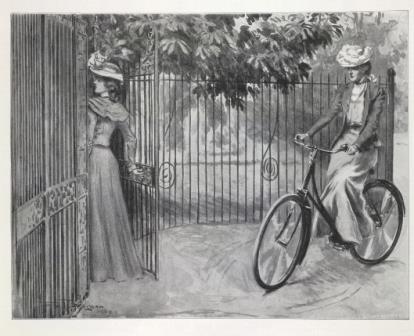 Lodge keeper William Green was a former sergeant in the Coldstream Guards and a Crimean veteran.  He had held his position at Windsor for over 40 years and had been decorated with an award for distinguished conduct by Queen Victoria shortly before her death. When interviewed by the press, Green denied that he had pushed Princess Victoria off her bicycle or had been in anyway rude to her.  The King and his daughters had not often been at Windsor so he had not recognised her.  If he had known who she was he would certainly have let her pass, although he had strict orders not to allow cyclists to use that roadway and had stopped no fewer than 735 last year.  Green said he had apologised to the Princess and had received a ‘very nice’ letter in reply.  Princess Victoria exonerated him from all blame as he was only doing his duty, but did say that he should not have grabbed the handlebars of her bicycle.

According to the press, there were many attempts by cyclists to evade Green’s vigilance at the gate.  One of the few to succeed was a cyclist who rode nearly up to the gates, dismounted, put his machine onto a passing carriage, and remounted again once the vehicle had gone through the gates.

The story had a postscript.  In 1905, William Green had to have a leg amputated. A stranger called at the lodge to ask after him. When Mrs Green asked her name, the caller smiled and said she should tell her husband that the lady pushed off her bicycle had come to see him.  The Princess then went to sit at the old man’s bedside. Other members of the royal family also visited.  William Green died in October 1905 and was buried at Windsor with full military honours.

Posted by Margaret.Makepeace at 09:00:00 in Conflict , Domestic life , Leisure , Work