Circumnavigating Warbah and Rollicking Riproars, or how to cure the boredom of Empire

Who’s Who of 1942 records that Edward Wakefield and Tom Hickinbotham, British colonial officers stationed at Kuwait, circumnavigated the Persian Gulf island of Warbah. However, 20 years after their retirement from imperial service, they admitted that this was not such a spectacular feat after all.

In March 1961, an article was reproduced in several newspapers under titles such as ‘Hoodwinked by Hickinbotham’ and ‘Rawther A Joke on ‘Who’s Who’: Blokes Sailed Around Warbah’. The report notes: ‘Two distinguished Englishmen admitted Friday they've been playing a joke for years on that staid and authoritative annual volume ‘Who's Who’’. Hickinbotham is quoted saying: ‘It's all rather a joke. Warbah Island is, in fact, a mudflat […] only just visible at high water’. He continued: ‘One day I said to Mr Wakefield, “See, nobody’s heard of Warbah Island”. So we decided to put it on the map by sailing around it in a launch’. 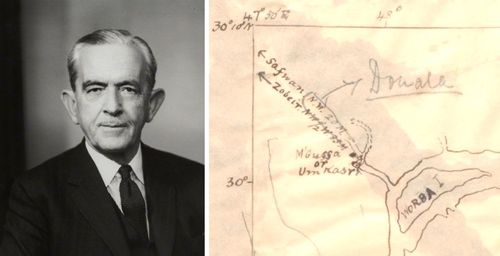 Some newspapers put this prank down to the fact that imperial service in Kuwait ‘was all deadly boring’. Hickinbotham alludes to such boredom in a personal letter of August 1942 to William Rupert Hay, Political Resident in the Persian Gulf.  Comparing his temporary position to that of a family doctor, he writes: ‘He has no authority in the household while the family health is good [...] Most people loath to call in a doctor while they see hope of unaided recovery […] They are particularly unwilling to take their troubles to a locum tenens’.  Perhaps in an attempt to lift Hickinbotham’s spirits, Hay sent him 12 bottles of Persian wine the following week.

One way of combatting boredom was reading. Certain books could be a means of legitimating the imperial mission of which Hickinbotham was a part, although they could also serve as a form of escapism. 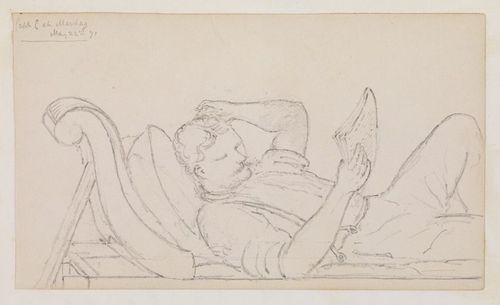 Hickinbotham’s ‘Private File’ contains correspondence with booksellers, providing details of the books that Hickinbotham procured for himself and the Kuwait Agency library.  These books include biographies that verged on hagiography, such as Philip Graves’s The Life of Sir Percy Cox: The Amazing Record of a Great Imperialist and Archibald Wavell’s Allenby: a Study in Greatness. Hickinbotham was also preoccupied with Arabian travel and exploration since he had served in Aden throughout the 1930s. He procured books like Paul Harrison’s Doctor in Arabia , Harold Ingrams’s Arabia and the Isles, and Hugh Scott’s In the High Yemen.

Publishers advertised to colonial officers by means of regular mailings of ‘Latest Arrivals’. Tailored advertising could also target the boredom and potential sexual frustration of a bachelor colonial officer away from home. One such example is a card fixed to a letter from Thacker & Company advertising the titillatingly titled Boudoir to Bar Stories, a ‘For Men Only’ collection of jokes and stories that ‘will throw you into rollicking riproars’.

The Empire was indeed boring. This was not because India, Kuwait or any of Britain’s colonies were intrinsically boring, but imperial administration was increasingly banal. Jeffrey Auerbach notes, ‘British administrators at all levels were bored by their experience travelling and working in the service of king or queen and country’ because ‘the empire’s “civilizing mission” was truly a banal affair of administration’. This had resulted in a situation where ‘reality simply could not live up to the expectations created by newspapers, novels, travel books, and propaganda’. Notwithstanding some exceptions, colonial officials, Auerbach concludes, ‘were deflated by the dreariness of their imperial lives’ and ‘desperate to ignore or escape the empire they had built’.

‘Wakefield, Sir Edward (Birkbeck)’, Who Was Who

‘Rawther A Joke on ‘Who’s Who’: Blokes Sailed Around Warbah’, The Bluefield Telegraph (11 March 1961)