John Gordon Lorimer’s monumental Gazetteer of the Persian Gulf, Oman and Central Arabia – often simply referred to as ‘Lorimer’ by many researchers - has been digitised and is now accessible for free through the Qatar Digital Library.

The Gazetteer’s first volume, the historical section, is divided into three parts:

• Part I (IOR/L/PS/20/C91/1), the ‘Arabian portion’, covers the general history of the Persian Gulf, with histories of the Arab littoral, Central Arabia, Oman and Turkish Arabia (Iraq);

• Part II (IOR/L/PS/20/C91/2), ‘the Persian section’, covers the history of the Persian littoral, including Arabistan and Makran. In addition, nineteen appendices cover subjects from pearl fisheries to the slave trade. Of note is Appendix P, ‘Cruise of His Excellency Lord Curzon, Viceroy and Governor-General of India’, an official account of the 1903 vice regal tour of Persian Gulf ports;

• Part III (IOR/L/PS/20/C91/3) consists of twenty-one genealogical tables for the ruling families of the Persian Gulf, Oman and Central Arabia. 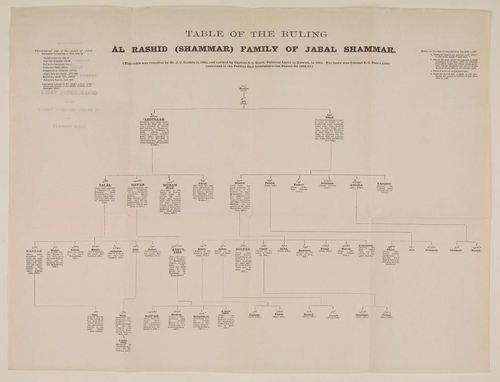 The Gazetteer’s second volume (IOR/L/PS/20/C91/4) is the ‘Geographical and Statistical’ section and includes alphabetical entries for tribes, towns and regions, from ‘Abdalilah to Zubārah. It also contains fifty-six reproductions of photographs taken by British colonial officers, but also German explorer, Hermann Burchardt, and Raja Deen Dayal and Sons, official photographers to the Viceroy of India. 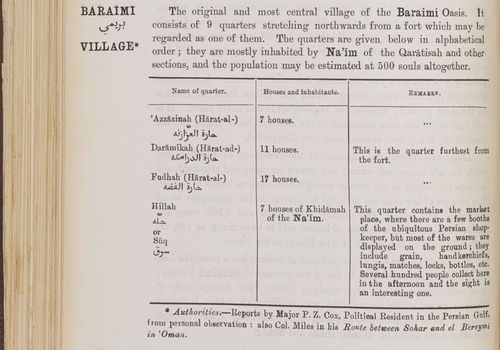 The Gazetteer includes two maps: a chart of pearl banks on the Arabian littoral of the Persian Gulf included with the genealogical tables; and a large ‘Map of the Persian Gulf, ’Omān and Central Arabia’ (IOR/L/PS/20/C91/6) produced by Lieutenant Frederick Fraser Hunter in consultation with Lorimer. 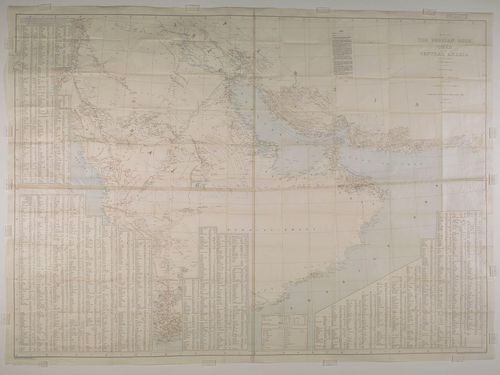 The collation, systematisation and codification of often scattered historical, geographical and statistical information in the form of gazetteers, handbooks, pilots and maps was of vital importance to modern imperialism. Indeed, the Gazetteer has its origins in Curzon’s official tour of the Gulf in 1903, which marked a seminal point in the shift of colonial policy towards treating the Persian Gulf sheikhdoms as closely analogous to Indian Princely states.

Hunter’s map is a good example of how this was done. As he recalls, it was an innovative map and challenging to produce: ‘Mr. Lorimer, the draughtsman, and myself spent the winter of 1905–06 in the Foreign Office at Simla – a building designed for summer use. We worked from ten to fourteen hours a day, often in overcoats and mittens, with our inks constantly freezing: good draughtsmanship was difficult.’ The map’s innovation was, however, deeply rooted in colonial ideology. Hunter used the same projection and 32-miles-to-the-inch scale as the Survey of India. This enabled the map to be ‘fitted alongside the map of India, thus giving, at a glance, a map of that portion of the world between Burma and Egypt’. 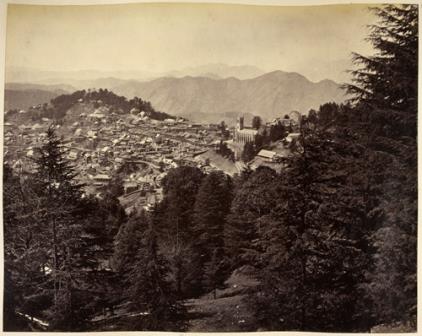 The Persian Gulf, therefore, was placed cartographically and politically within the British Raj, creating, as Nelida Fuccaro puts it, ‘new geographies of rule’. These were militant geographies since, as Felix Driver notes, ‘topographical mapping of the empire itself was represented as a device for exercising power’, enabling Britain to piece together the ‘landscape’s inner propensities’ and facilitating imperial control, exploitation and commerce. 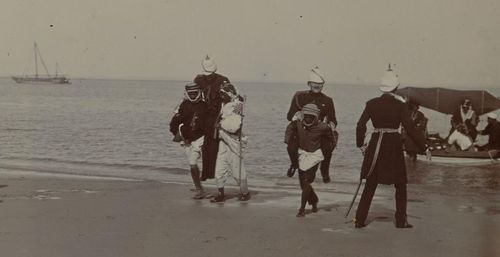 Writing in 1996 in Empire and Information, C. A. Bayly remarked that ‘[t]he expansion of knowledge was not so much a by-product of empire as a condition for it’. Indeed, the information found in Lorimer’s Gazetteer was reproduced and reconfigured in countless subsequent colonial reports, policy papers and handbooks. These provided the impetus for further exploration and intelligence-gathering in Arabia and beyond, all of which helped to solidify and extend Britain’s colonial dominance over the Middle East. The impact of this still reverberates loudly today.

Nelida Fuccaro, 'Knowledge at the Service of the British Empire: The Gazetteer of the Persian Gulf, Oman and Central Arabia’, in Borders and the Changing Boundaries of Knowledge ed. by Inga Brandell, Maria Carlson and Önver Cetrez (Forthcoming)

James Onley, The Arabian frontier of the British Raj: merchants, rulers, and the British in the nineteenth-century Gulf (Oxford: Oxford University Press, 2007)

Posted by Margaret.Makepeace at 10:35:00 in Journeys , Politics , Qatar , Science and environment

Posted by Margaret.Makepeace at 10:35 AM