Letter from an Indian soldier to his father

Over the coming period of the commemorations for the First World War, Untold Lives will be featuring extracts from letters held in the India Office Records written by Indian soldiers serving in France or recovering from their wounds in the Indian hospitals based in England. Today we feature two letters, one from a soldier, and one from worried parents in India.

One hundred years ago today, 14 January 1915, an Indian soldier serving in France, wrote to his father in his native Garhwali:

“It is very hard to endure the bombs, father. It will be difficult for anyone to survive & come back safe & sound from the war. The son who is very lucky will see his father & mother, otherwise who can do this? There is no confidence of survival. The bullets & cannon-balls come down like snow. The mud is up to a man’s middle. The distance between us & the enemy is fifty paces. Since I have been here the enemy has remained in his trenches & we in ours. Neither side has advanced at all. The Germans are very cunning. The numbers that have fallen cannot be counted”. 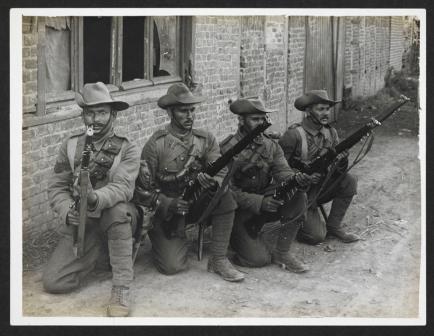 On the same day, the father of a different soldier wrote from India, in Urdu, to a British officer:

“My son has given full proof of his loyalty. He went six or seven times into action. Now he has been wounded. I trust that your honour of your kindness will have him sent back to the depot, so that he may be well rubbed with oil & make his appearance in the mosque. When he is well, he can be sent to train the recruits or sent on recruiting duty, if he is able to walk. I make this request at the instance of his mother who has been ill & helpless since we heard of his wound”.

In his report for the week, Captain E B Howell, the Head Censor of Indian Mail, wrote that this letter showed “… that Indian opinion regards the man who has been into the trenches & there been wounded as having very amply discharged his duty & there can be no doubt but that in the majority of cases the prospect of a return to the firing line appears to be regarded with something approaching dismay”.

Posted by Margaret.Makepeace at 09:00:00 in Journeys , World War One