Today is Friday the 13th – a day of trepidation for the superstitious. Friday is traditionally considered to be an unlucky day and thirteen an unlucky number, so the combination makes for a difficult day. Many people believe that accidents and mishaps are more common on Fridays and so refuse to travel that day.  Many tall buildings do not have a 13th floor, airlines leave out row 13, house numbers jump from 12 to 14.  On Friday 13th, bookings for weddings and events fall away, house purchases are not finalised, and business transactions are slow. 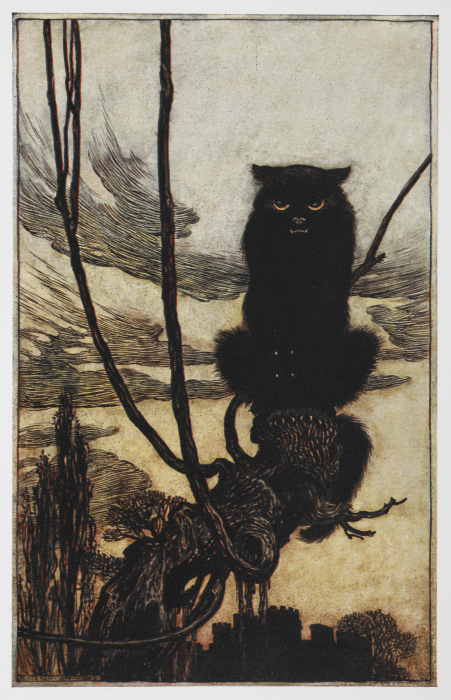 'By day she made herself into a cat' from Grimm’s Fairy Tales illustrated by Arthur Rackham (London, 1925) Images Online

In 1889 the London Thirteen Club was founded by a number of journalists, artists and actors led by writer William Harnett Blanch.  The main aim was to attack and expose superstitions of all kinds, but members also intended to raise money for charity. Similar clubs flourished in Paris and New York.

The club was to meet on the 13th of every month.  Members were to make a declaration that in their daily life they would, whenever practicable and convenient, act in ways that were deemed unlucky by the superstitious.

Annual dinners were an opportunity for club members to test a large number of superstitions.  Dinner was announced by the smashing of a mirror.  Guests entered the dining room by passing under a ladder and an open umbrella.  They ate at tables with thirteen place settings, decorated with shoes and peacock feathers, and with knives crossed. Salt was spilled as the diners sat down. The menu consisted of thirteen courses, with such delights as salmon with Friday sauce, spectral veal cutlets, black-cat chicken (better known as rabbit), and full-moon jelly.  Speeches lasted exactly thirteen minutes.

It appears that no harm came to any devotees of the Thirteen Club, but their activities did little to reduce superstitious behaviour. Shoes on a table, peacock feathers with an 'evil eye', and spilt salt are still said to be harbingers of bad luck. Crossed knives mean a fight will happen.  Black cats are the familiars of witches and so it is bad luck if one follows you, but lucky if one crosses your path – it hasn’t noticed you!

Fingers crossed and touch wood, you will not be affected by reading this blog post. For in Ohio, it is said that if you learn something new on Friday 13th a fresh wrinkle will appear on your face, and if you laugh on Friday 13th you will cry on Sunday 15th.

Richard Webster, The Encyclopaedia of Superstitions (2008)