The celebration of Waterloo in 1817

To celebrate the second anniversary of the Battle of Waterloo, Strand Bridge was opened by the Prince of Wales (later George IV) and the Duke of Wellington on 18 June 1817. The bridge soon became known as Waterloo Bridge. This hand-coloured etching and aquatint was published by Rudolph Ackermann on 21 June 1817 and is part of King George III’s Topographical Collection. 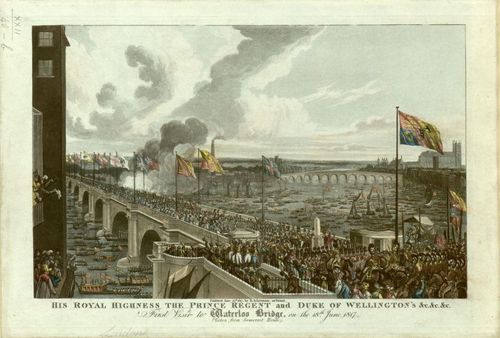 The vantage point depicted is unusual as it conflates a view across the bridge with another along the River Thames to Westminster Abbey and beyond. This perspectival trick allows the viewer to take in two aspects of the event. The Prince travelled along the River Thames in the royal barge surrounded by a flotilla of boats, before landing at Waterloo Bridge. The royal barge can be seen to the left in the foreground with the other boats moving along the Thames from Whitehall to the right. The Prince was met by the Duke of York and the Duke of Wellington and was escorted across the bridge surrounded by soldiers, before returning to Whitehall by water. The perspective employed in this print allows the viewer to experience the narrative of the event and follow the route which the Prince took from Whitehall by boat and across the bridge on horseback.

The print also enables to viewer to link the celebrations to the Battle of Waterloo itself. Smoke billowing from below the bridge evokes cannon fire while the marching soldiers call to mind the battlefield, reminding the spectator of the military success being commemorated. The celebration, and indeed the print itself, continue the tradition of the use of the River Thames as a site of drama and the setting for grand military and royal performances.

Another view from King George III’s Topographical Collection shows Ackermann’s shop at 101 Strand, from where this print would have been sold. 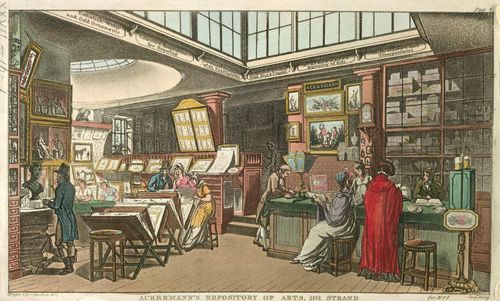 Ackermann’s shop was only a few metres away from Somerset House and the site of the new bridge. A map published on 1 July 1817 by William Darton shows new Waterloo Bridge. 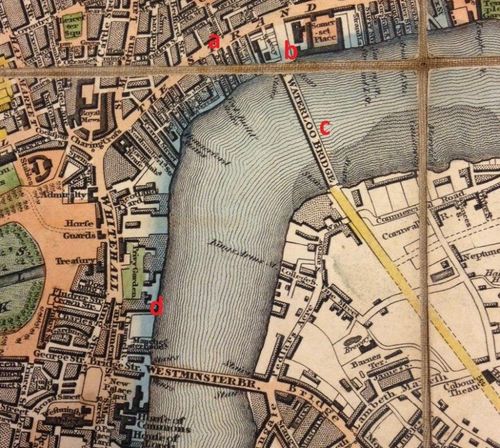 Maps 198.b.72. An entire new plan of the cities oif London & Westminster, & borough of Southwark; the West India Docks, Regents Park, New Bridges &c &c with the whole of the new improvements of the present time. Published 1 July 1817 by William Darton.

It is possible to see just how close 101 Strand was to the bridge. It is between the letters ‘S’ and ‘R’ of ‘STRAND’ on the map, marked as (a). The vantage point from which the view is taken at Somerset House is marked as (b). The new Waterloo Bridge is marked as (c) and Whitehall as (d).

Ackermann’s print of Waterloo Bridge was published just three days after its opening, showing his ability to  respond quickly to popular subject-matter and events. It was only available with hand-colouring and sold for four shillings. In reality, it is likely that Ackermann had ordered printmakers to begin working on the copper printing plate before the event, as etching, aquatinting, printing and hand-colouring was a lengthy process. Similarly, Ackermann didn’t advertise the print in his Repository of Arts until 1 July (Vol IV, 1 July 1817, No XIX) showing that it wasn’t available until after this date, despite the plate being lettered in June. This accounts for the time it took to print the image and then add hand-colouring.

A free display “Waterloo: War and Diplomacy” runs until 6 September 2015 in the British Library’s Treasures Gallery.