The relationship between people and alcohol has a long, complicated history. This was true for the first East India Company voyages to the islands of Indonesia where Company servants indulged heavily, “…disordering themselves with drinke and whores…”.  Persia was no exception to the conspicuous consumption of alcohol, whether wine produced at the vineyards of Shiraz or shipped from the Rhineland, or arak distilled in Goa and delivered by ship. Nominally illegal in Muslim Persia, wine especially has a long and colourful history in Iran, not least in the Shiraz region, though the connection between the region and the grape variety are disputed. 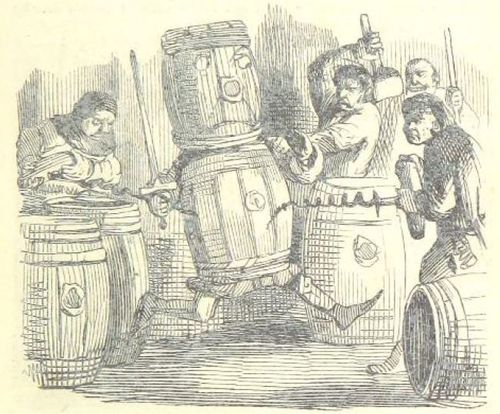 In 1727 William Cordeux, a Company servant at the factory in Bandar Abbas, noticed some soldiers drinking an extra ration of punch. Cordeux accused his nemesis, Chief Factor William Henry Draper, of attempting to bribe the guards to “make them continue firm to his side”. This was after a severe altercation between Cordeux, Draper and John Fotheringham, another of the Company’s servants at Bandar Abbas.  The two sergeants of the guard, Sharp and Boyden, on hearing the accusation and being summoned to answer for it in the factory’s Council, protested. They said that the men were provided with an extra ration when they went to Church on a Sunday, by way of encouragement. They went on to say that Cordeux would not have noticed anything amiss if Robert Iles, one of the privates, had not been “in liquor” after a visit to the punch house. Sharp and Boyden ended by saying that only nine men in the factory were allowed punch, presumably from the Company’s stock.

The use of alcohol as an encouragement to attend church is perhaps indicative of a wider concern for the spiritual wellbeing of the Company’s servants at the factory. The factory in Persia was a small community of maybe as few as a 20-30, including the guards, who were more likely to be Indian Sepoys, therefore either Muslim, Hindu or Sikh, or Catholic Topazes (Eurasians of Portuguese ancestry). This left the presumably Protestant Englishmen in a very small minority, with no obvious means of spiritual relief, though it is possible that the Dutch factory, being much larger, had its own Protestant ministry.

Posted by Margaret.Makepeace at 09:00:00 in Conflict , Religion