A small exhibition on vaccination is currently on show at the London School of Hygiene and Tropical Medicine, and features copies of a small number of items from the archives of the East India Company and India Office.

One of the items concerns efforts to introduce smallpox vaccination to Fort Marlborough at Bencoolen [Bengkulu, Indonesia]. Previous efforts had resulted in failure, as the dried lymph matter used in the vaccination did not survive the journey from Bengal, and so the procedure was ineffective. 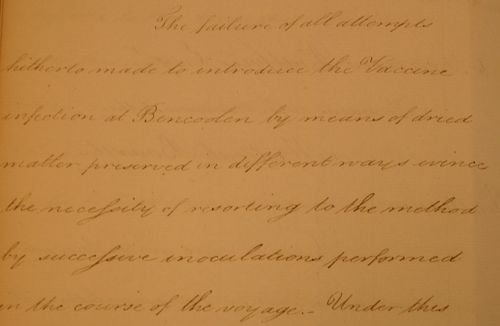 John Shoolbred, Surgeon and Superintendent General of Vaccine Inoculation in Bengal, proposed that children from the local orphan school be used as live carriers of the vaccine:

The passage of a ship sailing to Bencoolen the middle of December may be fairly estimated at a month, and as it would require two Children to be inoculated every week to ensure the preservation of the disease, twelve or fourteen Children would allow for any unexpected excess of time on the Passage as well as for some days which would inevitably be lost between the inoculation of the two first Children and the final departure of the Ship.

Shoolbred’s proposal was accepted, and a group of children who had not previously been inoculated were selected to make the voyage. The children were to travel on the ship Carmarthen, and a quick examination of the ship’s journal provides us with their names [note that it is unusual for children to be named in ship passenger lists]:

List of the crew of the Carmarthen, showing the Commander and Surgeon.

The following Children came on board 17th Dec  1803, By Order of the Bengal Government under charge of Serj. Williams…

A report by was duly issued to the Medical Board upon completion of the voyage: 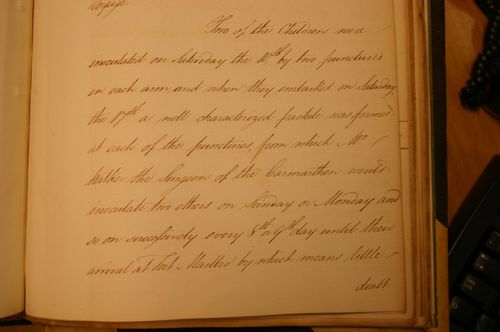 Two of the Children were inoculated on Saturday the 10th by two punctures in each arm, and when they embarked on Saturday the 17th a well characterized pustule was formed at each of the punctures, from which Mr Walker the Surgeon of the Carmarthen would inoculate two others on Sunday or Monday and so on successively every 8th or 9th day until their arrival at Fort Marlbro…

The somewhat mercenary use of orphan children in this manner was evidently not uncontroversial at the time, and in a further account of transmitting the vaccine via arm-to-arm transfer from Madras to Canton [China], Surgeon A Stewart reports that he has arranged for 12 adults to make the trip at a rate of 3 pagodas per month:

The persons who now agree to go are such arrived at a period of life when they are capable of judging for themselves, a circumstance which must at once silence every effort at misrepresentation on this subject.

The Library collections document the struggles with lymph preservation, objections to vaccination, problems of administration, and debates over whether to accommodate or legislate against the inoculation practice known as variolation, which had been practised in parts of India long before Jennerian vaccination. These materials can all be found via our archives catalogue.

Posted by Margaret.Makepeace at 09:00:00 in Health , Innovation , Science and environment