Metropolitan Police take to the streets

On 29 September 1829 the Metropolitan Police took to the streets of London for the first time.  The main purpose of the force was said to be the prevention of crime, with every officer responsible for the preservation of peace and order in the district within his care.  Promotion would be the reward for vigilance. No policeman was to enter a public house except in the performance of his duty, and publicans were liable to a penalty for allowing police to remain on their premises. 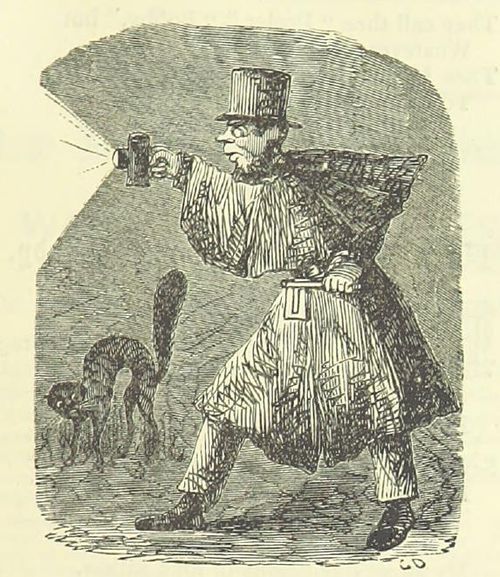 The next day the Morning Post published this assessment of the new constables.

‘Last night the New Police appeared on duty for the first time.

From the slight observation we had an opportunity of making, they seemed well fitted for the discharge of the duties they have undertaken as far as regards bodily power.  Such as were stationed along the great thoroughfares of Holborn and the Strand moved backwards and forwards at a slow pace, without any indication of that offensive inquisitiveness and unnecessary meddling which too often marked the conduct of the watchmen.  Many of them have rather the appearance of respectable tradesmen than of persons taken from the more humble classes. Their dress is not so glaring as to attract notice, and their insignia of office are in a great measure concealed by a dark-coloured great coat.  In one of the narrow streets near Charing-cross, a silly and wanton trial of their assiduity was made by springing a rattle from one of the garret windows.  The Police in the neighbourhood were soon on the spot from whence the alarm proceeded, but found their attendance useless.  A crowd was collected, but soon dispersed, after indulging their curiosity by an inspection of the Police uniform.’