A tribute to forgotten heroes of the seven seas

Seamen from South Asia, known as lascars, played a vital role during both world wars, providing manpower to keep the supply lines open. However, their bravery and commitment, in often terrifying situations, have been largely overlooked, even though thousands paid the ultimate price. During the First World War 3,427 lascars lost their lives and 1,200 were taken prisoner. It is thought that around 6,600 died during the Second World War, 1,022 were wounded, many severely, and 1,217 became prisoners of war. Pioneering historians such as Rozina Visram have highlighted the importance of their role and the extent of their sacrifice, but until now, relatively little has been known about the stories of individual lascars. The India Office Records team was therefore delighted to find this modest-looking file, dated 1945. 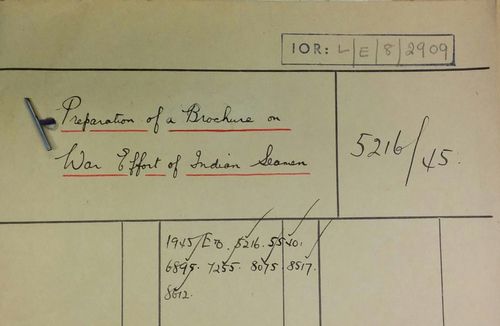 A note inside the file states ‘We’ve very little information about Indian Seamen. The attached represents all there is.’

According to a further note ‘Indian seamen served in all the Seven Seas throughout the war. They took part in the landing operations in Africa, Italy, France and Burma.’ The file contains five pages listing honours awarded to Indian officers and men for gallantry and devotion to duty, or for long and meritorious service at sea. Honours were awarded for bravery under fire and when ships were torpedoed and sinking, courageous rescues, service to others, leadership and fearless devotion to duty. A further page lists those who received civil commendations for brave conduct or were mentioned in despatches. The images below are taken from the list of honours and give a flavour of the individual acts of courage.

The slightly fuzzy typescript and flimsy paper in the file seem inadequate as a memorial to such courage, but this record is remarkable for the way it brings together the elusive details of their service.

This story also illuminates the Untold Lives of the staff at the British Library. The importance of the file was spotted by Luke Marriage when he was cataloguing the India Office Economic Department records, so he showed it to colleagues at the India Office Records team meeting and we agreed that we should blog about it. Before he catalogued it, researchers could only have found it by painstakingly searching in the original registers and indexes which would have led them to the rather cryptic catalogue record below. 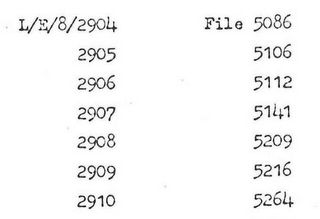 Thanks to Luke’s work, the new catalogue record includes the brief description below which means that in future, researchers will easily find it in our online catalogue. 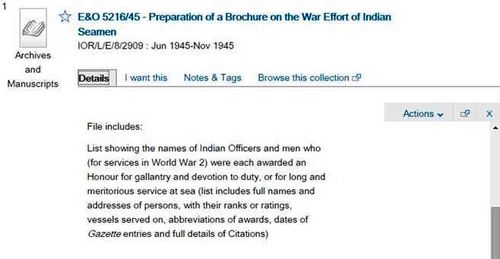 We are very pleased that our efforts to improve access to the India Office Records have also enabled us to pay tribute to the courage and fortitude of Indian seamen during the Second World War. At 11-00 am today, we will remember them further by using the Untold Lives blog to post the names of all those listed in the file.