One hundred years ago, British, French, Australian, New Zealand and Indian troops were holding the Gallipoli Peninsula against the Ottoman Empire.  The British Library holds eye witness accounts of three Allied Officers who were involved in the action: Roger Keyes, Chief of Staff to the Vice Admiral in command of the British forces at the Dardanelles; Major General Hunter Weston in command of the 29th Division; and Captain F.H. Mitchell of the Royal Navy.

The Gallipoli Peninsula lies on the European side of the Dardanelles Straits, which divides Europe from Asia.  After the Western Front turned into the stalemate of trench warfare in late 1914, a number of Allied Leaders began to consider new theatres of war to try and break the deadlock.  The ‘Easterners’, including Winston Churchill, believed that it would be possible to overcome the Ottomans at the Dardanelles and take Constantinople (now Istanbul).  This would undermine Germany and allow Britain and France to help their Russian allies.

The British Navy led a number of attacks during January, February and March 1915 in order to force the Straits but on 18 March the final attempt failed with heavy losses for the Allies.  Hunter Weston had doubted the success of this ‘Eastern’ strategy.  In his private diary he records: ‘I pointed out that owing to the ill-advised action of the Navy, our greatest asset, the element of surprise, had gone’.

The landings went ahead on 25-26 April 1915 and Mitchell described what happened in a letter to his wife:

‘The great day for which we have been working has come & gone, & although it proved the last day for many, was crowned with success. The army is now established on the end of the Gallipoli Peninsula, sufficiently firmly, I believe not to be turned off- It was a terrible landing place. Picture yourself two small coves with cliffs on each side which  were hollowed out to hold maxim guns- the whole of the beach planted thickly with barbed wire, & several lines of trenches just above the beach. That was what our men had to force, & by jove they did it, but at a price of losing 3000 men out of a total of 12,000 landed’.

The defences mentioned in Captain Mitchell’s letter are shown in this chart which belonged to Keyes and in these photographs from Hunter Weston’s diary. 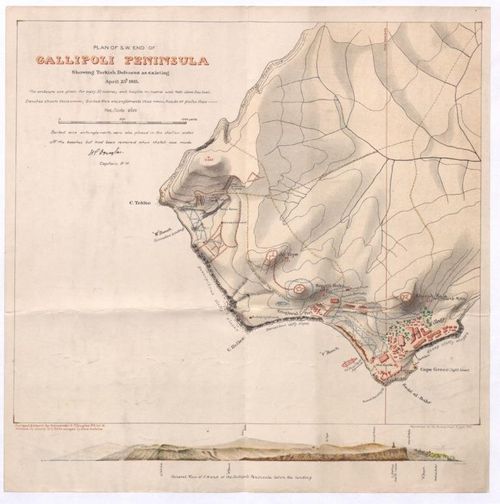 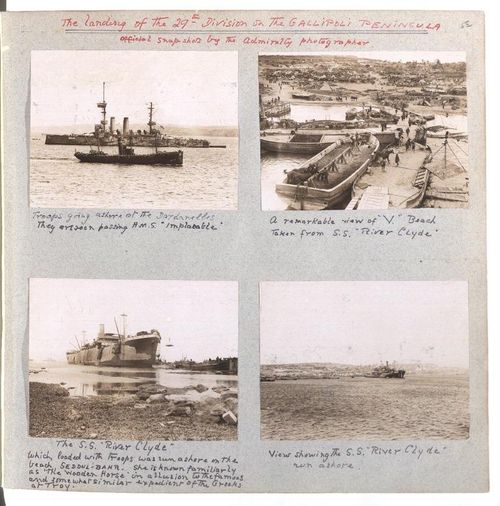 After successfully landing the troops on the Gallipoli Peninsula the Allied Troops were halted and contained by the Ottoman troops and trench warfare was implemented. The photograph below shows Hunter Weston in the trenches leading to his dugout. 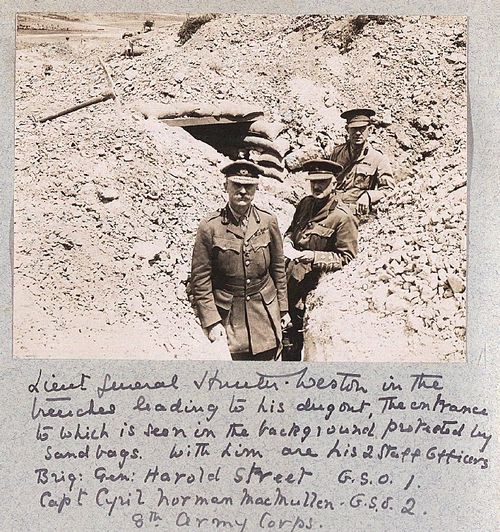 The Allies began to attempt to push back the Ottomans and gain more ground. The photograph below shows a heap of empty shell cases after one such attack. These attacks were not successful and disease was sweeping through the camps, made worse by the lack of food, water and unsanitary conditions.

In August 1915 Hunter Weston was invalided home with sunstroke. The photograph below shows him leaving the Teigne Hospital in Malta.

The decision was taken in December 1915 to evacuate the troops without having achieved their objective. Both sides had suffered huge losses through casualties and illness.

Further reading:
Most of the papers of Keyes, the complete diaries of Hunter Weston and the letters of Mitchell can be found on the Europeana website and on the British Library’s Digitised Manuscripts website

Posted by Margaret.Makepeace at 09:00:00 in Manuscripts , Modern history , World War One