For a brief period from 1657 to 1666 the East India Company traded to the Guinea Coast of West Africa.  Cargoes of textiles and manufactured goods were sent from England to be exchanged for gold and ivory which were shipped to India to support Company commercial operations. 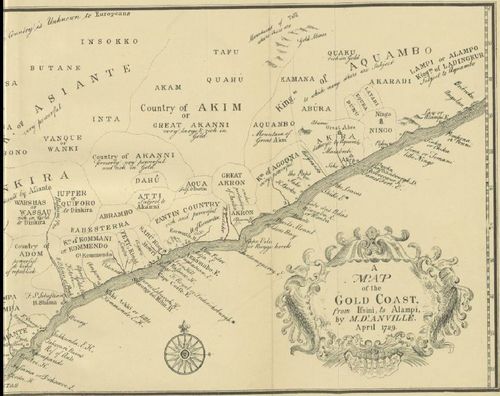 Detail from facsimile map 1729 by d’Anville  in  George Peacock, The Guinea or Gold Coast of Africa  (Exeter, 1880)

The main English base was Fort Cormantine, but the East India Company also took over factories (trading posts) at Cape Coast and Wyamba (Winneba), and established new ones at Anto, Tantamkweri, and Benin. The factories were exclusively male domains – the Company had no intention of maintaining a proper settlement. Men were sent out to be merchants, soldiers and workmen.  Some did return to England, but the mortality rate from disease was very high. Over 50 deaths are recorded in the India Office Records, approximately half of those named as Company employees in West Africa. Frequent requests were sent to London for more men to be sent to replace the dead and sick. Agent Lancelot Staveley was given permission to return home in 1658: ‘I find my strength & ability of body soe much decayed by my long stay here that itt is dangerous for me to remaine longer’.

Rivalry between European powers on the Guinea Coast was keen, with each nation striving to gain the friendship of influential Africans. The English negotiated with  John Cloice (or Claessen), for the right to occupy Cape Coast Castle after it was surrendered by the Dutch.  Cloice was a powerful African merchant who was de facto ruler of Fetu from 1656 until his death in 1662. Friendly relations with the Africans were vital for successful trading, but disputes did break out from time to time.  Company merchant Nicholas Herrick’s behaviour offended the King of Aguinea and the factory at Wyamba was looted as a result.

The East India Company directors gave clear instructions that their merchants were not to participate in the slave trade supplying African labour to West Indian plantations, saying that this had previously proved very much to the Company’s ‘prejudice’. However the directors ordered the shipment of black labourers from the Guinea Coast to serve the Company elsewhere.  A total of 35 men and women are recorded as sailing for St Helena, Pulo Run and Bantam, some taken from the complement of labourers kept at Fort Cormantine. In June 1661 the Company merchants wanted to send a pinnace to Arda to procure black labourers since Africans recruited locally tended to run away.  The directors responded by stating that Africans must be willing to serve the Company and were not to be coerced. Captain John Mallinson of the ship American was instructed to take to St Helena twenty of the Africans at Fort Cormantine who could speak English, but the Company merchants refused to send away any of their labourers: ‘they have all wives and children in the country and will never thrive after beinge transported, and the sending away of some will cause all the rest to run into the countrey’.

The East India Company was forced to withdraw from the Guinea trade when Charles II granted a charter to the Company of Royal Adventurers into Africa.  Jean Barbot’s journal of his voyage to Guinea 1678-1679 and a plan of Cape Coast Castle made for the Royal African Company in 1740 are currently on display in the British Library’s fascinating exhibition West Africa: Word, Symbol, Song which is open until 16 February 2016.