In the East India Company’s ‘Hall of Fame’, Claudius James Rich features prominently as a most esteemed Company servant.  He was a gifted linguist well-versed in Persian, Arabic, Syriac, Turkish and Hebrew,  and an accomplished scholar on cuneiforms.  In contrast, Samuel Manesty only merits a mention in the ‘list of infamy’ as an unscrupulous opportunist famous for his unauthorised diplomatic mission to the Persian Court in Teheran as a self-appointed British Envoy in 1804.

However, on reflection, this comparison between the two men is not fair.

The son of a slave-ship owner, Samuel Manesty ventured to the East Indies as a 19-year-old boy in 1778.  Valued by the Company for his knowledge and experience in dealing with local authorities and native merchants, he was posted to Basra as a Company Resident in the early 1780s.  Claudius Rich wasn’t yet born.

The two men crossed paths when Claudius Rich was appointed the new Resident of Baghdad.  When Rich arrived in Baghdad in 1807, Samuel Manesty had already been a resident at Basra for half of his life.  Understandably, Manesty assumed a supervisor’s role for the 21-year-old Rich.  But Claudius Rich was unimpressed by the older man’s patronising attitude:
'He thinks to have me in complete subjection in Bagdad, and that I will be no more than his assistant, though bearing the title of Resident… This, though all very well for an acting Resident, will of course not do for me; …  He particularly recommends me to write and inform him of even the most trivial occurrence, and seems much disposed to interfere in the detail of the Bagdad Residency…'  (Rich’s letter to Sir James Mackintosh, 1807). 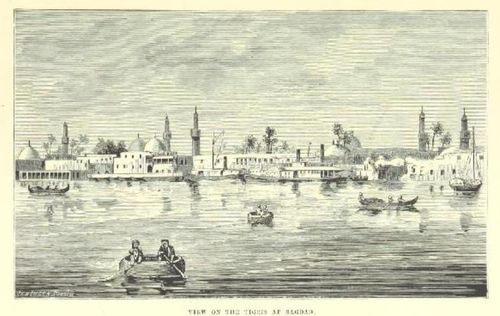 View of the Tigris at Baghdad from William Perry Fogg, Arabistan: or the Land of “The Arabian Nights " (London, 1875)

Young Rich’s arrogance did not end there.  Rich married Mary, daughter of Sir James Mackintosh, high court judge of Bombay.  Manesty, having lived in Basra for over 25 years, married a local woman, daughter of an Armenian merchant.  On the day of Rich’s arrival at Basra, Manesty invited Mr and Mrs Rich to his dinner party, especially asking Mary to meet his Armenian wife.  Rich, with undisguised contempt , declined to bring his wife with him.  He mentioned this incident to Mackintosh: 'He (Manesty) at least wore the semblance of friendship, which was all I wanted, knowing him to be incapable of anything sincere; but I was much irritated by his presuming to mention Mrs Manesty, and to expect that I would permit Mrs Rich to associate with a dirty Armenian drab…'.

These shocking words not only show Rich’s deep-seated dislike of Manesty, but also offer an insight into Rich’s attitude towards the local people, in whose languages he was expert.  It is ironic to notice that many so-called “Orientalists” were often openly prejudiced.

One possible explanation for such attitudes is that the so-called “Orientalists” considered themselves masters of the ‘natives’ as opposed to those who had ‘gone native’.   To ‘go native’ implied ‘de-civilization’ by the ‘Orientals’.  Some later travellers remarked that some who had lived in the East for too long appeared corrupted in character with traits of ‘Oriental’ manners. Samuel Manesty for one became a target of such mockery.

Classically educated Claudius Rich had immunised himself against the ‘native’ influence by marrying a traditional English lady.  He made it clear that he did not intend to follow in Manesty's steps in his future career.

Posted by Margaret.Makepeace at 11:00:00 in Conflict , Journeys , Middle East