A working knowledge of local languages was a skill which the East India Company valued in its army officers. Cadets newly arrived in India were often taught Hindustani, and officers were encouraged to learn new languages, especially if required for their postings and assignments.

Developing and promoting resources for the study and learning of these local languages was therefore an important objective of the East India Company. Officers with an interest in such languages were encouraged to develop vocabularies, grammars and other such aids for use by colleagues and successors to their position. 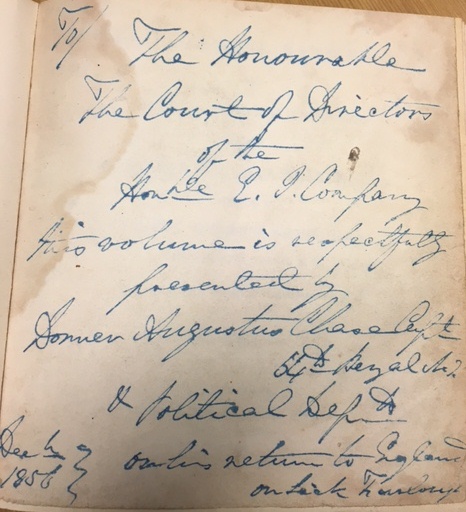 One such individual was Dormer Augustus Chase (1823-1860), who was stationed in Burma from 1847 until his death in 1860. Chase was born in November 1823, the son of John Woodford Chase, a Captain in the British Army, and his wife Louisa Anne Millicent, née Thomas.

He was nominated as a Cadet in the East India Company Army in 1840, joining his regiment, the 46th Bengal Native Infantry, in India in March 1842. He first arrived in Burma in 1847 as part of the Talain Corps, before joining the Arakan local battalion. In 1852 he obtained a civil commission as the Assistant Commissioner in Martaban, a position he held until his return to England on leave in 1856-1857. Chase returned to Burma following his leave, where he was promoted to Captain and served as the Acting Commissioner at Pegu.

Dormer Augustus Chase is today best remembered for his works on the Burmese Language. His most successful work was the Anglo-Burmese Hand-Book, or a guide to a practical knowledge of the Burmese language which was published by the American Mission Press in Burma in 1852. 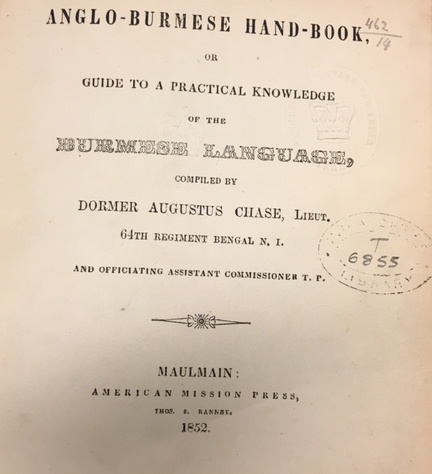 Chase’s immediate superiors were so impressed with the handbook that they convinced the Government of India to subscribe to 100 copies, 50 of which were then presented to the Commissioner at Pegu for use by officers posted to Burma. The book went on to have fourteen editions, and was revised in 1890 by Frank Dennison Phinney (1857-1922), the then superintendent of the American Mission Press.

The Anglo-Burmese Hand-Book was not the only language guide that Chase produced. The British Library also holds copies of two manuscripts produced by Chase, but never published. The first is a classified vocabulary of Burmese roots, which was completed by Chase in 1857 whilst in Pegu. 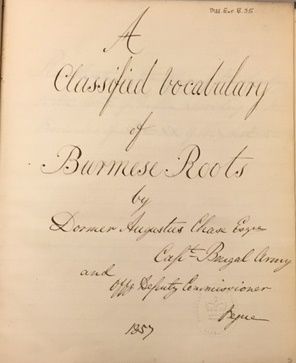 Title-page of Classified vocabulary of Burmese roots Mss Eur B35

The second is a Siamese or Thai grammar, this work is undated but appears to have also been completed by Chase in about 1857. 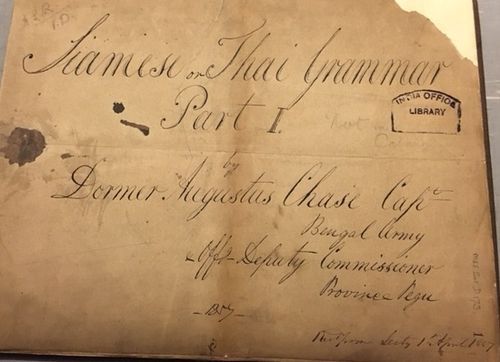 Dormer Augustus Chase died at sea off the coast of Akyab, Burma in April 1860, and therefore didn’t get to appreciate the value that his handbook had to army officers stationed in Burma for well over 35 years.

Posted by Margaret.Makepeace at 09:00:00 in Journeys , Manuscripts , South Asia , Work