Today is Edward Lear’s 204th Birthday.  To celebrate, I’ve chosen to look at a letter from Lear to the MP and later prime minister, Sir William Ewart Gladstone and another to William Bevan, British Vice-Consul in San Remo.

The letter to Gladstone was written in October 1863 on a printed subscription list and advertisement for Lear’s publication Views in the Seven Ionian Islands. 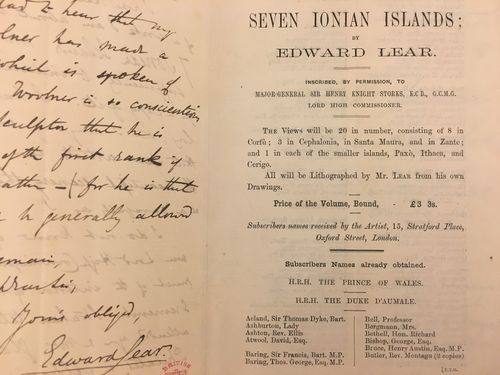 Views in the Seven Ionian Islands was a series of lithographs drawn and published by Lear in December 1863. Lear produced a list of the noteworthy subscribers and used their names to further advertise the project. Among the many names were Lear's good friends Chichester Parkinson-Fortescue and Frances, Countess Waldegrave. 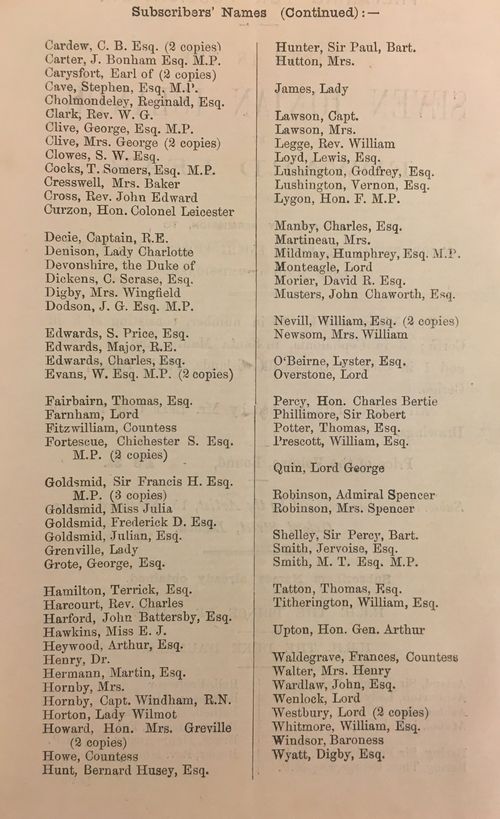 Verso of a letter from Edward Lear to William Ewart Gladstone Add MS 44401.

In the letter, Lear asked Gladstone if he would consider subscribing to the Ionian Views:

"I hope that the enclosed circular of a work I am about to publish on the Ionian Islands may interest you sufficiently to induce you to subscribe for a copy of it. I had lived there so long, that I may say without impropriety that few artists can have drawn the beautiful scenery there as much and as carefully as I." 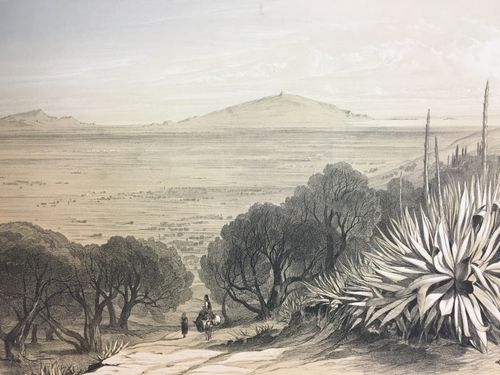 Lithograph 'View from the Village of Galaro - Zante' in Views in the Seven Ionian Islands, drawn and published by Edward Lear, 1863. British Library 1782.d.16. 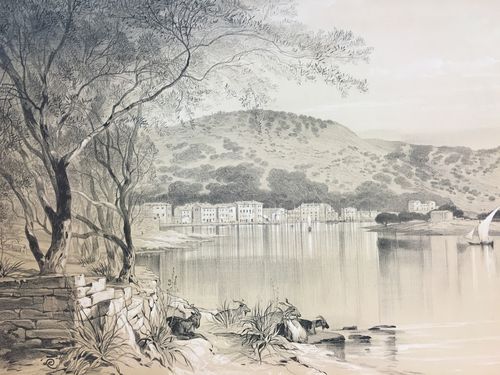 Lithograph 'Town and Harbour of Caïo - Paxo' in Views in the Seven Ionian Islands, drawn and published by Edward Lear, 1863. British Library 1782.d.16.

The letter to Gladstone could not be more different from another letter in the British Library Manuscript Collections which is addressed to William Bevan, the British Vice-Consul who had moved to San Remo and lived near Lear. The letter contains Lear's  poem How Pleasant to Know Mr Lear which was apparently composed with the help of Bevan's eldest daughter. Lear has also included a caricature of himself and his cat Foss. 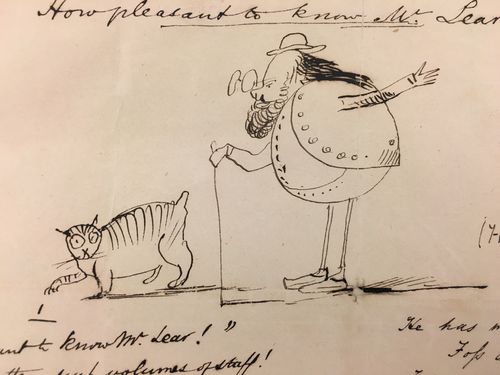 This drawing must surely illustrate the following verse in the poem:

He has many friends, lay men and clerical,
Old Foss is the name of his cat;
His body is perfectly spherical,
He weareth a runcible hat.

The letter beneath the poem reads:

I disclose you a Pome, which you may or may Knott send to the Lady who says "How pleasant to know Mr Lear,  It may be sung to the air "how cheerful along the Gay Mead".

Lear stated that his poem could be set to the music of the hymn How Cheerful along the Gay Mead. Here is a link to the score in the Levy Sheet Music Collection if anyone fancies a sing-along with Lear on his birthday!