James Hilton (1816-1907) was an avid collector of chronograms in the late nineteenth and early twentieth centuries. He found and copied out examples from many different manuscripts but he also received new chronograms from chronogram enthusiasts.

Reverend Cecil Deedes (1843-1920) was a key contributor of chronograms to Hilton’s collections. His chronograms were based on local events and national news stories including the death of Gladstone, the situation in South Africa and escaped tigers.

One chronogram from 1898 reveals Deedes’ empathy for the dogs of Sussex who due to the persistence of rabies were ordered by magisterial powers to be muzzled. Any dogs found not wearing a muzzle were disposed of by the police. Deedes’ chronogram is as follows: 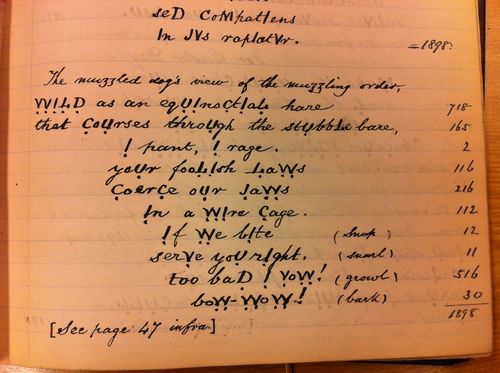 Luckily for the dogs the order was revoked later on in 1898 by which time Hilton notes that many dogs had grown very fat due to a lack of exercise. Deedes celebrated with his canine friends with the chronogram below: A couple of years later in February 1900 Deedes was concerned with the fate of Archie the elephant. Archie was an elephant in Sangar’s exhibition at Crystal Palace, Sydenham. Irritated by his keeper prodding him with a spear, Archie crushed him under his foot and broke loose. Hilton reports that he caused ‘much mischief and alarm in the neighbourhood’. Deedes’ chronogram reports what happened next: Deedes enjoyed writing many of his chronograms in Latin but luckily Hilton includes a transcription for those like me who have trouble translating it. The translation is as follows:

In order to draw Archie out, a number of other elephants were herded around the wood. On seeing the other elephants Archie emerged from his hiding place. Hilton and Deedes don’t record what happened to Archie but Hilton notes that at the coroner’s inquest ‘magisterial interference caused punishment to fall on certain of Sangar’s people’.

The British Library holds a number of volumes of Hilton’s published and unpublished works on chronograms, which include both historical and current affairs chronograms. Many can be found at Add MS 68939-68941. There are four more volumes from this collection currently being catalogued which will shortly be available.

Posted by Alexandra Ault at 08:30:00 in Leisure , Manuscripts , Modern history