Earlier in 2014 we blogged about the new Special Collection of websites related to World War One that we’ve put together to mark the Centenary. As today is Armistice Day, commemorating the cessation of hostilities on the Western Front, it seems fitting to see what we have collected so far. 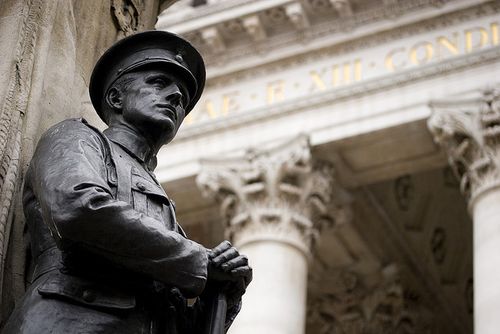 The collection has been growing steadily over the past few months and now totals 111 websites. A significant subset of the WW1 special collection comes from the output of the Heritage Lottery Funded projects. The collection also includes websites selected by subject specialists at the British Library and nominations from members of the public.

A wide variety of websites have been archived so far which can broadly be categorised into a few different types:

Critical reflections
They include critical reflections on British involvement in armed conflict more generally, for example the Arming All Sides website, which features a discussion of the Arms trade around WW1 and Naval-History.net, an invaluable academic resource on the history of naval conflict in the First and Second World Wars.

Artistic and literary
The First World War inspired a wealth of artistic and literary output. For example the website dedicated to Eugene Burnand (1850-1921) a Swiss artist who created a series of pencil and pastel portraits depicting various ‘military types’ of all races and nationalities drawn into the conflict on all sides. Burnand was a man of great humanity and his subjects included typical men and women who served in the War as well as those of more significant military rank.

The Collection also includes websites of contemporary artists who in connection with the Centenary are creating work reflecting on the history of the conflict. One such artist is Dawn Cole whose work on WW1 has focused on the archive of WW1 VAD Nurse Clarice Spratling’s diaries, creating a project of live performance, spoken word and art installations.

Similar creative reflections from the world of theatre, film and radio can be seen in the archive. See for example Med Theatre: Dartmoor in WW1, an eighteen-month project investigating the effect the First World War had on Dartmoor and its communities. Pals for Life is a project based in the north-west aiming to create short films enabling local communities to learn about World War One. Subterranean Sepoys, is a radio play resulting from the work of volunteers researching the forgotten stories of Indian soldiers and their British Officers in the trenches of the Western Front in the first year of the Great War.

Community stories
The largest number of websites archived so far comprise projects produced by individuals or local groups telling stories of the War at a community level across the UK. The Bottesford Parish 1st World War Centenary Project focusses on 220 local recruits who served in the War using wartime biographies, memorabilia and memories still in the community to tell their stories.

The Wylye Valley 1914 project has been set up by a Wiltshire-based local history group researching the Great War and the sudden dramatic social and practical effects this had on the local population. In 1914 24,000 troops descended suddenly on the Wylye Valley villages, the largest of which had a population of 500, in response to Kitcheners’ appeals for recruits. These men arrived without uniform, accommodation or any experience of organisation. The project explores the effects of the War on these men and the impact on the local communities.

An important outcome of commemorations of the Centenary of WW1 has been the restoration and transcription of war memorials across the UK. Many local projects have used the opportunity to introduce the stories of those who were lost in the conflict. Examples include the Dover War Memorial Project; the Flintshire War Memorials Project ; Leicester City, County and Rutland War Memorials project and St. James Toxteth War memorials project.

Collecting continues
This shows just some of the many ways people are choosing to commemorate the First World War and demonstrates the continued fascination with it.

We will continue collecting First World War websites through the Centenary period to 2018 and beyond. If you own a website or know of a website about WW1 and would like to nominate it for archiving then we would love to hear from you. Please submit the details on our nominate form.