With just over 9 weeks to go until the UK General Election, the Web Archiving team together with curators in four Legal Deposit Libraries (the British Library, The National Library of Wales, the National Library of Scotland and the Bodleian Library) have been busy archiving websites for a special collection about this significant national event.

It is a daunting task, but we are fairly experienced in this area having put together similar collections for the two past general elections, 2005 and 2010. 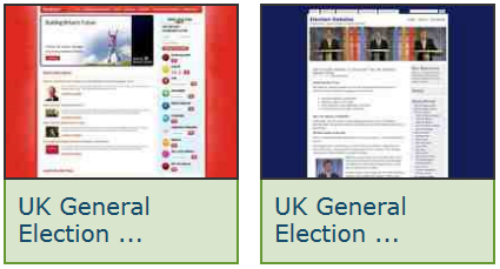 We cannot predict the size of the UK political Web Sphere, however there are 650 parliamentary constituencies, 422 registered political parties (December 2014 the Electoral Commission) and several thousand prospective parliamentary candidates standing for election in 2015.

The vast majority of Parties and candidates are likely to have social media channels in addition to their ‘official’ websites, therefore, rather than attempting the impossible task of identifying every single political website, a sampling approach of has been applied. All major and minor UK Parties will be collected along with a representative sample of c. 120 candidates taken from one urban conurbation and one Shire County per region. For London, we have selected constituencies covering six boroughs, three inner London and three outer London. As we covered the same constituencies for the 2005 and 2010 elections we will have a time-series which will give future researchers a sense of how the Web was used by politicians across the decade.

In addition, the collection will comprise of a large number of news, commentary, opinion polls, research centres, think tanks and interest groups as well as some more entertaining sites such the Bus Pass Elvis Party aka Church of the Militant Elvis.

Inevitably the political landscape as well as the world of web archiving has changed in the ten years since we started archiving UK general elections. Firstly, the date of the 2015 General Election was fixed in advance following the Fixed-term Parliaments Act 2011, meaning that campaigning started much earlier than with previous elections. This year we started collecting in January whereas in previous years it has been a bit later into the year.

Of even more significance from the web archivist’s point of view is that Legal deposit Legislation was introduced in April 2013 enabling us to archive pretty much everything we want within the UK web sphere, although permission must still be sought to make content publically accessible.

In terms of the content of the collection, we are certainly archiving much more social media than in previous elections.  Much has been written about the uptake in social media among politicians as they increasingly try to reach voters over the internet. 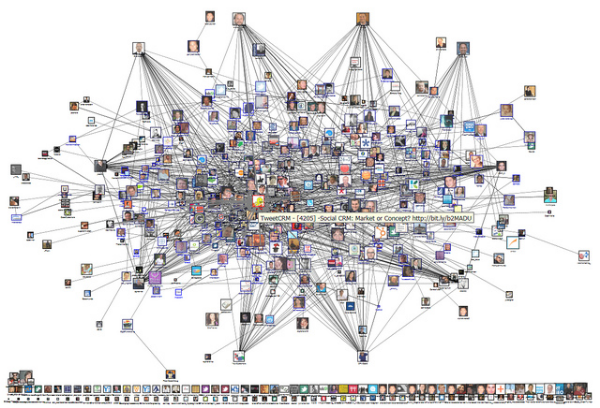 MPs sent almost one million tweets in 2013 up 28 per cent on the previous year and 230 per cent from 2011. It is crucial that we work to overcome the technical and legal challenges involved in archiving social media as it is one of the most important channels for scholars studying our times and is one of the most demanded types of content by researchers. 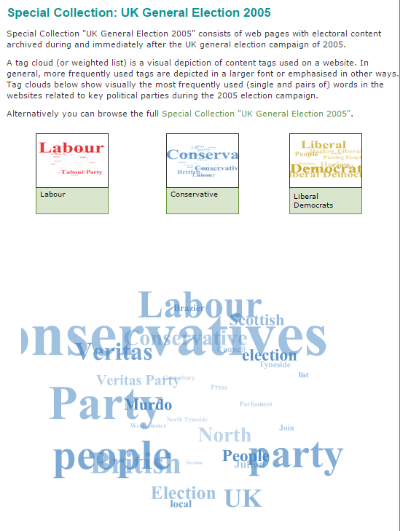 The resulting collection will be available online through the UK Web Archive  in the case of content for which we have permission from website publishers, and in the reading rooms of the Legal Deposit Libraries for all other material we have collected. We also hope to continue improving access to our collections by way of data-based visual tools to access the archive's content as alternatives to the standard search and browse functions.

In 2005, for example,  we implemented a  Word Cloud generator for websites belonging to key political parties which shows the most frequently used words in the websites during the 2005 election campaign.

We would be delighted to hear about websites related to the UK general election and would encourage readers to submit suggestions on our nomination form at http://www.webarchive.org.uk/ukwa/info/nominate 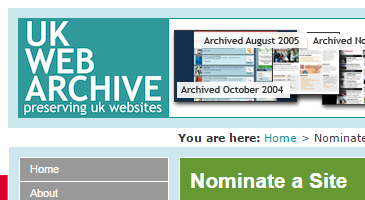 Posted by Sabine Hartmann at 3:11 PM