The Long and Winding Road to the Olympics 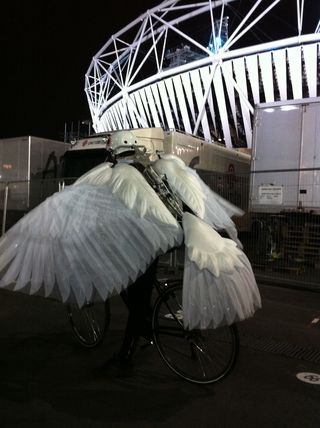 I dropped a few hints on Thursday, but now the dove bikes have flown the coop, I think that I can post the image above from the Opening Ceremony of the London 2012 Olympic Games. Quite some time ago, in a windswept industrial park in Dagenham, Danny Boyle said he didn't want to repeat the unfortunate dove roasting at the Seoul Olympics, so was going to use volunteers instead. I was one.  And Friday, just after Team GB were led into the stadium to the sound of David Bowie and Arctic Monkeys blasted through their first, great hit, I turned on my lights, began to flap and set off around the 'M25' of the Olympic Stadium along with my fellow doves (a more pleasant flock of people would be hard to imagine).

It turned out that there were a series of American links, hence this post. The inspiration for the dove bikes came from the American naturalist, Louis J. Helle, who wrote that, 'Bicycling is the nearest approximation I know to the flight of birds. The airplane simply carries a man on its back like an obedient Pegasus; it gives him no wings of his own'.

The New York costume designer, Suttirat Larlarb, came up with plans for wings that moved as we bobbed up and down, threaded lights along their span, and chose materials that glowed under the stadium UV lights. As she said to the press, 'the bit I’m most proud of is the dove bikes. We had to make incredibly delicate wings that could move very fluidly out of flexible plastic sheet lined with layers of white mesh fabric with fibre-optics laced into it' . Arctic Monkeys also played The Beatles' Come Together, which John Lennon had originally composed during Timothy Leary's abortive gubernatorial run against Ronald Reagan in 1969. Leary had to drop out of the race after his arrest for possession of marijuana. The slogan had been 'Come together, join the party'.

But, perhaps best of all, the whole sequence was set up by Bob Haro, the BMX innovator who took part in the stunt bike scenes in E.T.: the Extraterrestrial. The flying dove bike may have had some Hollywood antecendents. You can catch his new design for an Olympic BMX bike at the Design Museum exhibition, 'Designed to Win', until 18 November. And, in the Library's Entrance Hall and Piazza, there's our Olympex: Collecting the Olympics exhibition.

Love the American connections and was thrilled by the whole spectacle! Congratulations on participating in the London 2012 Olympics - a story to tell your children....