Following from my last post about the recently digitised copy of Shah Tahmasp’s Khamsah of Nizami, we are pleased to announce that the British Library has now completed digitisation of another of its most famous and important Persian illustrated manuscripts: Add.18113, containing three of the five poems from the Khamsah of Khvaju Kirmani (1290-1349?). Partially modelled on Nizami’s earlier work, Khvaju drew extensively on traditional Iranian folklore. This manuscript, notable for its early calligraphy and illustrations, contains the story of Humay and Humayun, the Kamālnāmah (‘Book of Perfection’) and the Rawżat al-anvār (‘Garden of Lights’).

Humāy u Humāyūn was completed in 1331 in response to a request to enchant Muslim audiences with a Magian theme. Prince Humay, while hunting, is led by a ruby-lipped onager to the Queen of the Fairies who shows him a portrait of Humayun, daughter of the Emperor of China. He falls deeply in love and sets off to find her. His quest led him through many adventures but eventually he won her and became ruler of the Chinese empire. For a summary of the plot see Bürgel (below). 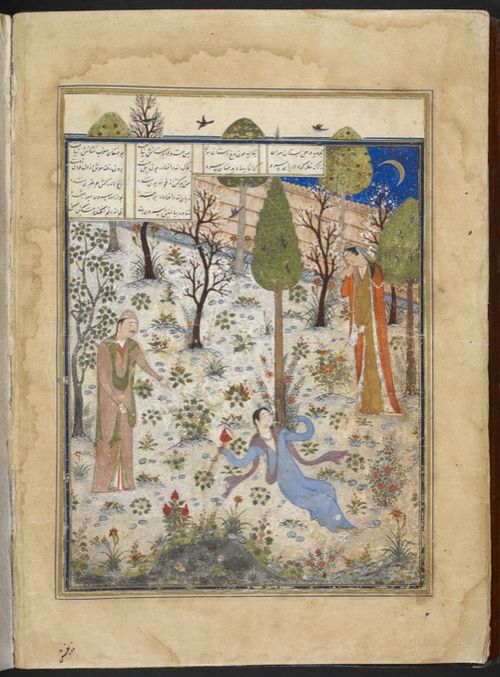 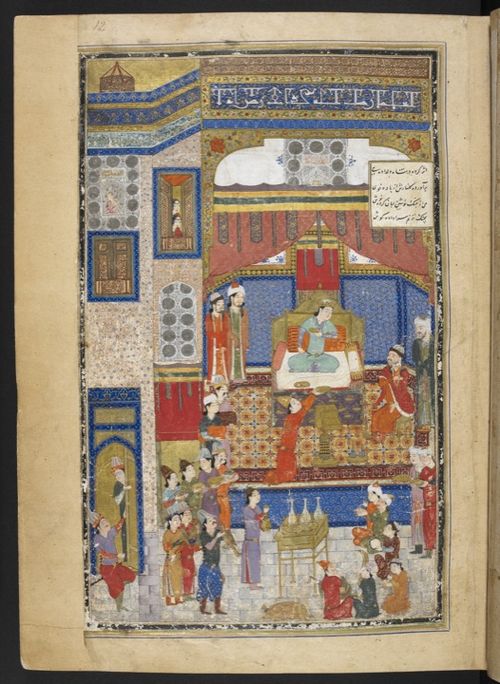 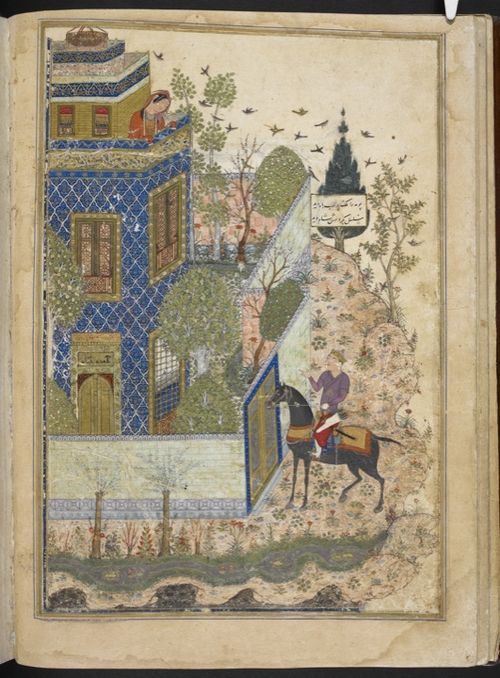 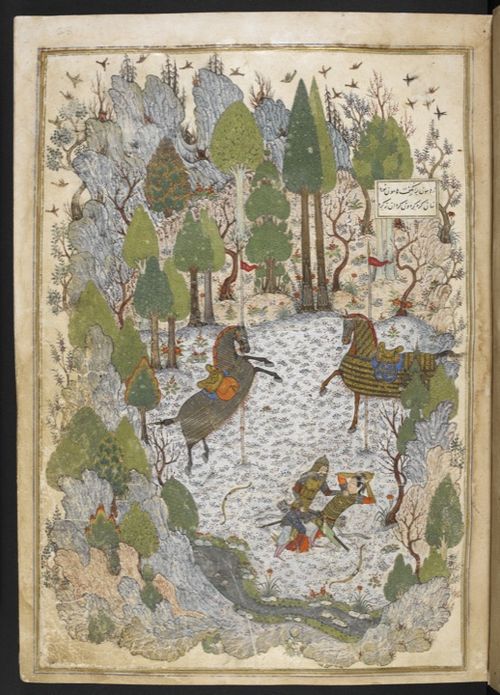 Humayun (in disguise) has challenged Humay to a duel. Defeated she removes her helmet before making up the quarrel (Add.18113, f. 23r) 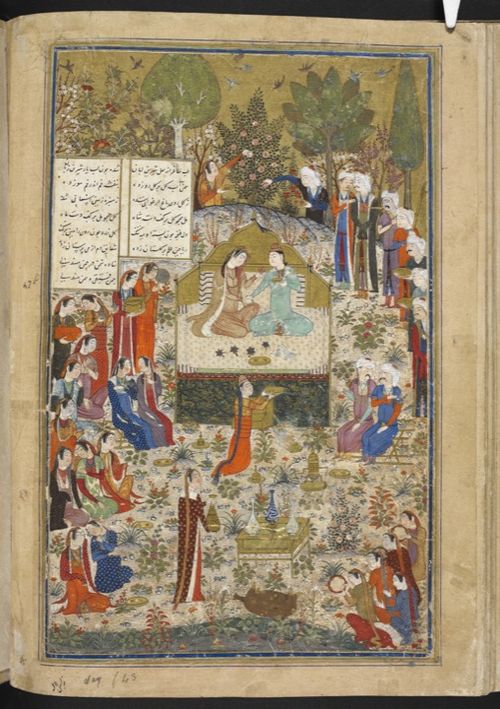 Humay and Humayun feasting in a garden and listening to musicians (Add.18113, f.40v) 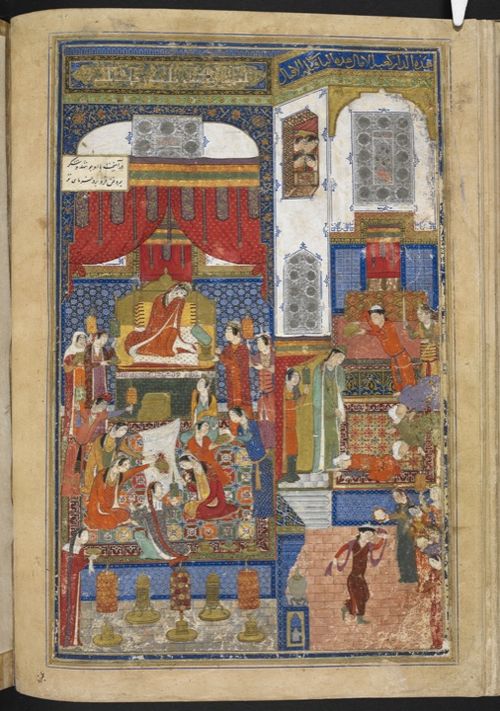 Humay on the day after their wedding has gold coins poured over him as he leaves Humayun’s room. The name of the artist, Junayd, is inscribed in the arch above Humayun's head (Add.18113, f. 45v)

The second poem, the Kamālnāmah (‘Book of Perfection’), completed in 1343, is a description of an allegorical journey describing moral and religious topics interspersed with anecdotes about kings and mystics. In the episode illustrated below. ʻAli ibn Abi Talib was travelling to a staging post when he was attacked by an oncoming horseman. His defeated assailant, at the point of death, lamented that he would end his life without achieving his heart’s desire, namely to fulfill his beloved’s request for ʻAli’s head.  On hearing this ʻAli spared his life: “If your affairs would indeed be settled by such an act, then I am ʻAli and this is my head, but do cease repining and pull yourself together. Take your sword and do as you will.” (Fitzherbert, p. 148). The story ends with the attacker’s conversion and their triumphal return together. 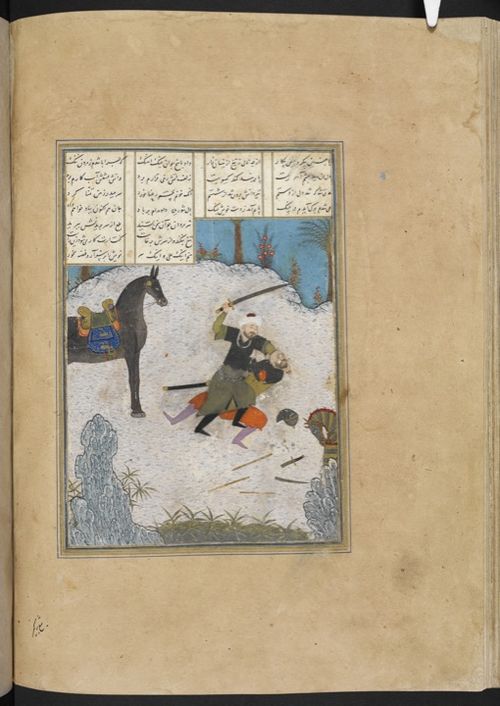 The third work — which may, on account of the position of the shamsah (see below), have originally been placed at the beginning of the volume — is the Rawżat al-anvār (‘Garden of Lights’), a Sufi masnavi completed in 1342, consisting of 20 discourses on the requirements for a mystical life and the ethics of kingship. 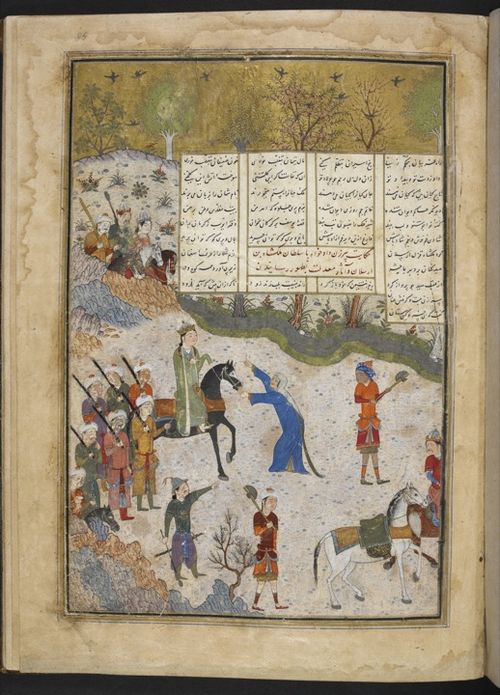 Sultan Malikshah ibn Arslan is here accosted by an old woman who reproaches him for allowing his soldiers to hunt her cow, the sole provider of sustenance for herself and her four fatherless children. The king repented and was thus saved, the moral being that one should always help the needy and can only be saved by good deeds (Add.18113, f. 85r) 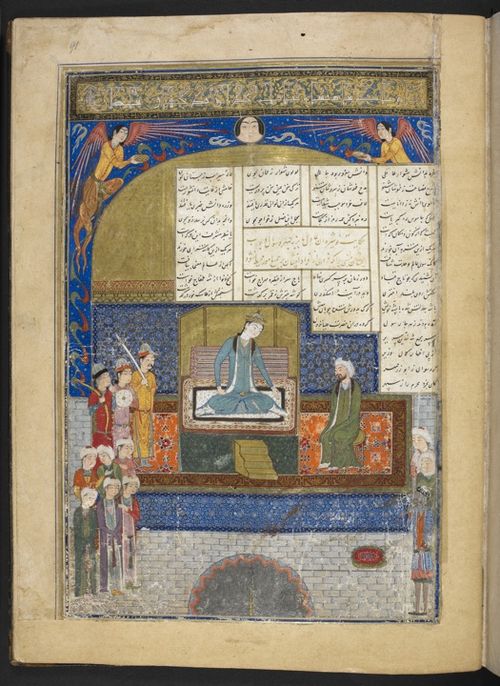 In this final illustration the Sasanian ruler Nushirvan (Khusraw I Anushirvan, r. 531-78) discourses with his minister Buzurjmihr, epitomising the concept of the just ruler and the wise counsellor (Add.11813, f. 91r)

The volume itself has a complex history. The poems were copied by the famous calligrapher Mir ʻAli ibn Ilyas al-Tabrizi al-Bavarchi (میر علی بن الیاس التبریزی الباورچی) in 798 (1396) at the Jalayirid capital Baghdad[1]. The paintings may have belonged with the original copy or have been added separately. The artist’s name, Junayd, a pupil of Shams al-Din who worked under the Jalayirid sultan Uways I (r. 1356-74), is inscribed on an arch on folio 45v (Junayd naqqāsh-i sulṭānī). The volume was subsequently refurbished for the Safavid prince Bahram Mirza (1517–49), the youngest of the four sons of Shah Ismaʻil (r. 1501–24) who founded the Safavid dynasty, at which time a page was detached and mounted in an album compiled for him by Dust Muhammad (Istanbul, Topkapı Pal. Lib., H 2154, fol. 20v). As the manuscript stands today, the pages are out of sequence and it is not certain exactly what the original order was. Scholars are currently studying the codicology, especially in relation to the illustrations. 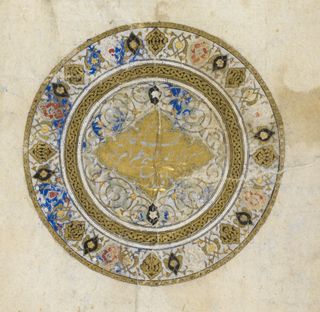 The manuscript was acquired by the British Museum 16 March 1850 from the sale of Major-General Thomas Gordon (1788-1841), known primarily for his role in the Greek War of Independence in the 1820s and 1830s. Its digitisation was sponsored by the Iran Heritage Foundation as part of our collaborative Persian Manuscripts Digital Project.

[1] There were two calligraphers called Mir ʻAli Tabrizi active in the late 14th century: Mir ‛Ali ibn Ilyas, the calligrapher of this manuscript, and Mir ‛Ali ibn Hasan al-Sultani, who is credited with having invented the nastaʼliq script.