A 'Golden letter' in Malay to Napoleon III

This beautiful royal Malay letter (Or.16126) from the ruler of Johor, Temenggung Daing Ibrahim, to the Emperor of France, written in Singapore in 1857, is a triumph of style over substance. Its thirteen golden lines pay effusive compliments to Napoleon III but little else, as can be seen from the translation (see link given below). The letter was accompanied by a handsome gift of Malay weaponry. 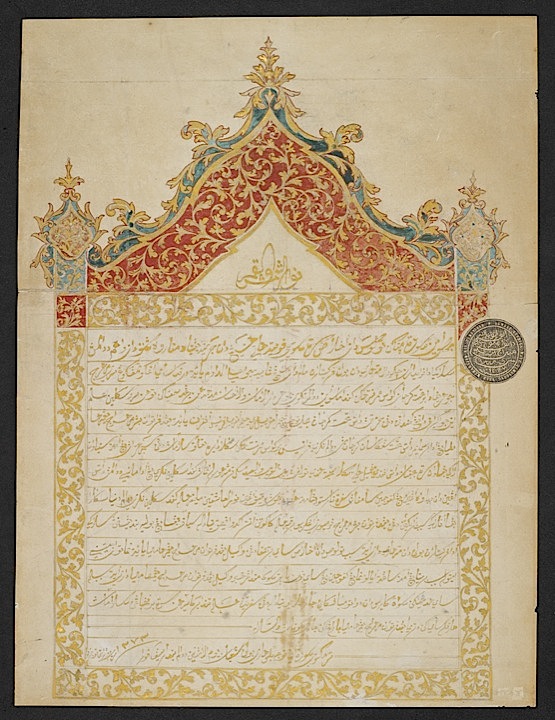 It is hard to know what either side hoped to gain from the despatch of such a magnificent missive, for in the mid-19th century French interests in Southeast Asia were primarily focused on Indochina, while Johor’s allegiance was firmly with the British. In the letter the Temenggung makes no requests of the French, and adroitly expresses his greatest praise for Napoleon III in terms of the Emperor’s cordial relations with Queen Victoria, ‘both sides thereby gaining in such strength that no other nation can match them, as long as the sun and moon revolve’ (bertambahlah kakuatan antara kedua pihak tiadalah siapa bangsa yang boleh bandingannya selagi ada perkitaran bulan dan matahari). It is most likely that the French envoy named in the letter, M. Charles de Montigny, who was in 1857 based in Singapore, procured the letter for his own personal or professional advancement.

Politically, historically and diplomatically this letter could be regarded as something of a dead end, but as a work of art it is far more significant. Despite the frequent use of gold in Malay manuscript illumination, this is the earliest known example of chrysography – writing in gold ink – in a Malay letter. It is beautifully illuminated with a rectangular golden frame on all four sides of the textblock, surmounted with an elaborate arched headpiece in red, blue and gold.

In format and structure, this epistle an exemplar of the courtly Malay art of letterwriting. At the top is the kepala surat or letter heading in Arabic, Nur al-shams wa-al-qamr, ‘Light of the sun and the moon’; this phrase is very commonly encountered in Malay letters addressed to European officials. The letter opens conventionally with extensive opening compliments or puji-pujian, identifying the sender and addressee, and with fulsome praise for the Emperor on account of his renown. Strangely, we do not encounter the Arabic word wa-ba‘dahu or its equivalents such as the Malay kemudian daripada itu, traditionally used to terminate the compliments and mark the start of the contents proper, for the simple reason that there is no real content to this letter. The compliments meld seamlessly with a brief mention of the French envoy entrusted with the letter, before gliding into the final section with a statement of the accompanying gift and thence onto the termaktub, the closing line giving the place and date of writing. 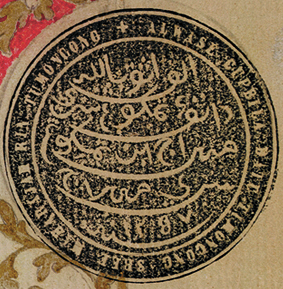 At the top of the letter, in a conventional position with its midpoint precisely to the right of the first line, is stamped the round black ink seal of the Temenggung, inscribed in both Arabic and roman script:

The Temenggungs of Johor were amongst the political winners following the establishment of a British settlement at Singapore by Thomas Stamford Raffles in 1819, and the British-Dutch Treaty of London of 1824 which led to break-up of the historic kingdom of ‘Johor and Pahang and Riau and Lingga’. Daing Ibrahim’s son, Temenggung Abu Bakar, successfully negotiated with the British to assume the title ‘Sultan of Johor’, and founded the modern ruling house of Johor, now one of the states of Malaysia.

Posted by Ursula Sims-Williams at 2:56 PM