The Mughals: Life, Art and Culture in New Delhi

Since the closure of the British Library's exhibition Mughal India: Art, Culture and Empire in April 2013, we have had the opportunity to launch facsimile versions of the show first in Kabul, Afghanistan this past summer and now in New Delhi, India this winter.

The Mughals: Life, Art and Culture has been curated by the British Library and is brought to New Delhi by Roli Books in collaboration with the Indira Gandhi National Centre for the Arts. It will be open for public viewing from 22nd November - 31st December 2013. The exhibition showcases the British Library's extensive collection of illustrated manuscripts and paintings that were commissioned by Mughal emperors and other officials and depict the splendour and vibrant colour of Mughal life. The artwork cover a variety of subject matter; from scenes of courtly life including lively hunting parties and formal portraits of emperor to illustrations of works of literature which manage to convey the complex storylines in a single image, and dramatic panoramas of Indian landscape. 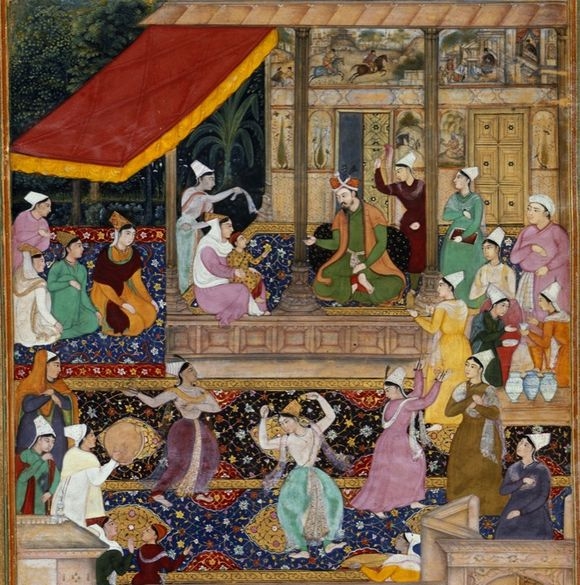 The child Akbar recognizes his mother at Kabul in 1545. This scene, from the Akbarnāmah, takes place in the women’s quarters. Ascribed to Madhu with principal portraits painted by Narsigh, 1602-3. BL Or.12988, f. 114r.

Many of these works have never been published until now. Some of the rare exhibits on display include Shah Jahan's recipe book, 'Notebook of Fragrance', an 18th century manuscript 'Book of Affairs of Love' by Rai Anand Ram Mukhlis, 'Reminiscences of Imperial Delhi by Metcalfe and illustrated by the studio of Mazhar Ali Khan, a route map from Delhi to Qandahar, the earliest Indian atlas, a map of Delhi, and some of the most extraordinary portraits of the Mughal emperors. Being in a library and not a museum, most of the objects are kept in storage and are rarely seen. This exhibition provides a unique opportunity for Indian viewers to be a part of their own history.

Akbar is re-united with his mother after an absence of two years. This scene, from the Akbarnāmah, takes place in the women’s quarters. One of the ladies is almost certainly Gulbadan (Or.12988, f. 114r)

The exhibition will be inaugurated on Thursday 21 November 2013 by the Honourable Vice President Shri Hamid Ansari as the Chief Guest, with Shri Salman Khurshid, Honourable Minister of External Affairs as the Guest of Honour. A new publication by British Library curators and printed by Roli Books will accompany the show. For the British Library publication, Mughal India: Art, Culture and Empire by J.P. Losty and Malini Roy, please click here.

Events accompanying the exhibition include: