Fashion in 14th century Mosul: a new exhibition at the Courtauld Gallery

The British Library is loaning several key items to a new exhibition, ‘Court and Craft: a masterpiece from Northern Iraq’, which opens at the Courtauld Gallery on 20 February 2014.  The exhibition has at its centrepiece an exquisite bag probably manufactured at Mosul and dating from between 1300 and 1330. Made of brass and inlaid with gold, silver and a black material, it is decorated with intricate geometric patterns and scenes depicting musicians, hunters and revelers. Despite being metal, the bag is light and plaques with integral loops at each side suggest that it was probably worn as a handbag over the shoulders. Developing the themes illustrated on the bag, the exhibition includes metal-work, glass, jewellery and paintings from Northern Iraq, dating from the 14th century. 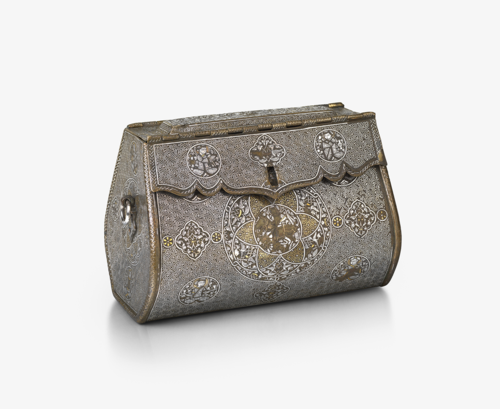 The Courtauld bag. Mosul, 1300-30 (possibly during the reign of the Il-Khanid Sultan Uljaytu, 1304-16). © The Samuel Courtauld Trust, The Courtauld Gallery, London

Unfortunately manuscripts from this early period are comparatively rare, but the British Library is fortunate in having some of the best examples which will be exhibited alongside the Courtauld bag. One of the most beautiful is the Khamsah (‘five poems’) by the Persian poet Khvaju Kirmani (1290-1349?) about which I wrote in an earlier post (‘An illustrated 14th century Khamsah by Khvaju Kirmani’). Copied by the calligrapher Mir ʻAli ibn Ilyas al-Tabrizi in 798 (1396) at the Jalayirid capital Baghdad, one of the paintings is ascribed to the artist Junayd, a pupil of Shams al-Din who worked under the Jalayirid Sultan Uways I (ruled 1356-74). 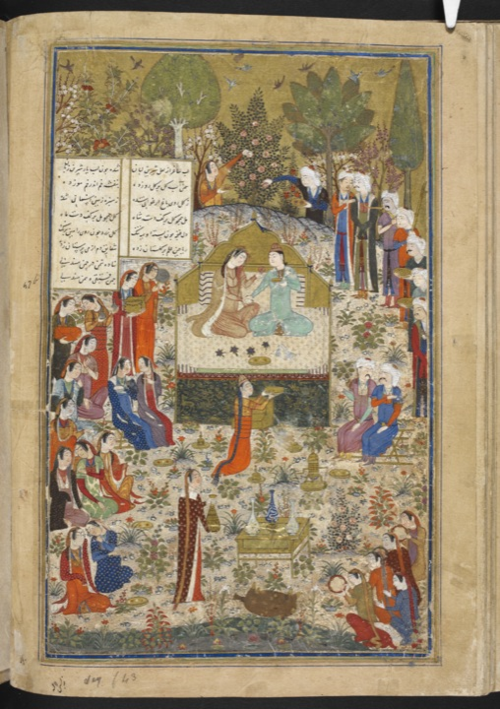 Humayun, daughter of the Emperor of China, and prince Humay feasting in a garden (Add 18113, f 40v)

In the scene above, Humay and Humayun are seated in a garden surrounded by courtiers and attendants and being entertained by musicians. On the left, one of Humayun’s personal attendants is shown carrying a bag which closely resembles the Courtauld bag. Two others carry a mirror and a bottle of perfume. Below the couple is an array of flasks, trays, gold candlesticks and incense burners, examples of which are included in the exhibition.

The decoration of the Courtauld bag includes roundels and a panel on the lid showing hunting scenes and convivial celebrations.

Court scene in the centre of the lid showing a man and woman sourrounded by figures and courtly paraphanalia. © The Samuel Courtauld Trust, The Courtauld Gallery, London

These are also depicted in three leaves from the British Library's copy (Or.14140) of the Arabic treatise ʻAjāʼib al-makhlūqāt (‘the Wonders of Creation’) by al-Qazwini (c. 1203-83). Although our profusely illustrated copy contains no colophon, Stefano Carboni (see below) has attributed it to Mosul and dates it to the turn of the 14th century, most probably  between 1295 and 1302.

Musicians and a dancer perform during a drought at a dried-up spring to make the water flow again.  (Or.14140. f. 63v) 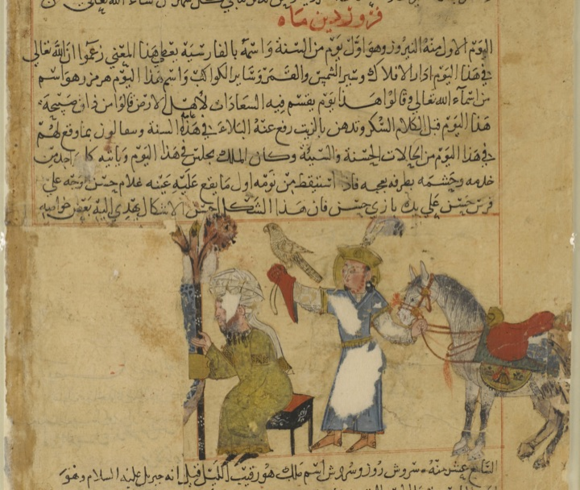 Writing about the first month of the year, Farvardin, Qazwini describes how a horse and falcon are presented to the king when he wakes on New Year's Day. Unfortunately the painting is damaged and only the king's bolster is visible on the left. (Or.14140, f. 20v)

The geometric designs which form such an integral part of the decoration of the Courtauld bag are also evident in the magnificent thirty-volume Qur’an commissioned by Sultan Uljaytu. This Qurʼan was completed, according to its colophon, in Mosul in the year 710 (1310) and was copied by ʻAli ibn Muhammad al-Husayni. It includes a commissioning certificate in the names of Uljaytu's viziers Saʻd al-Din and the famous historian Rashid al-Din (c. 1247-1318) whose history Jāmiʻ al-tavārīkh (‘Compendium of Chronicles’) is also illustrated in the exhibition by four early 14th century drawings. 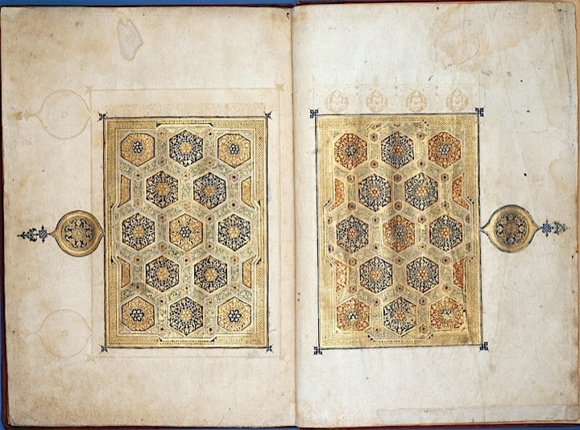 The exhibition, curated by Rachel Ward, runs from 20th February until 18th May 2014 at the Courtauld Gallery, Somerset House, Strand, WCR ORN. It is  accompanied by a fully illustrated catalogue (see below). I have just come back from installing the British Library loans, and was lucky enough to see almost everything in place! Although it is comparatively small (36 items altogether), the themed approach makes it a very exciting and successful exhibition.

Stefano Carboni, “The London Qazwini: An Early 14th Century Copy of the ʿAjāʾib al-makhlūqāt,” Islamic Art: An Annual Dedicated to the Art and Culture of the Muslim World 3, 1988-89, pp. 15-31.

Stefano Carboni, “The Wonders of Creation and the Singularities of Ilkhanid Painting: A Study of the London Qazwini British Library Ms. Or. 14140,” Ph.D. diss., School of Oriental and African Studies, University of London, 1992. Download free from British Library Electronic Theses Online Services (ETHoS).

Add.18113, containing three of the five poems from the Khamsah of Khvaju Kirmani (1290-1349?). - See more at: http://britishlibrary.typepad.co.uk/asian-and-african/2013/07/an-illustrated-14th-century-khamsah-by-khvaju-kirmani.html#sthash.Xk987QKI.dpuf

Posted by Ursula Sims-Williams at 12:33 AM