Significant Judeo-Persian handwritten books, some dating back to the early Middle Ages have been stored for decades in established Judaica libraries across Europe, the USA and elsewhere. Notwithstanding, lack of knowledge about their existence due chiefly to limited or barred access to uncatalogued collections, has meant that their study has undesirably lagged behind. Inadequate mastery of Persian coupled with unfamiliarity with the Persian and Judeo-Persian literary traditions, may also explain why this field of study remained undeveloped for a lengthy period. 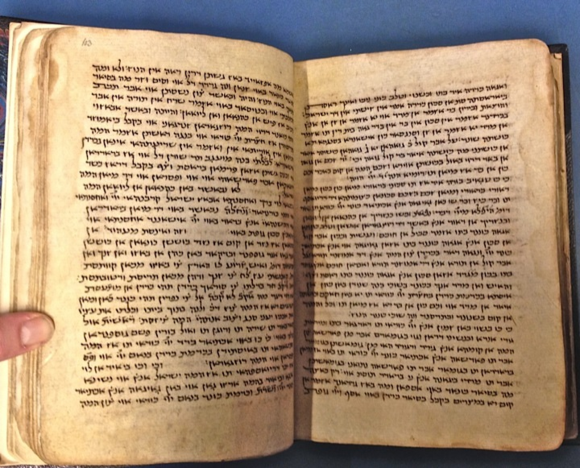 Written in Hebrew characters, Judeo-Persian manuscripts and imprints are essentially works composed in a Persian dialect that closely resembles ‘classical’ or ‘literary’ Persian, combined with Hebrew words. The practice of writing the Persian language in Hebrew letters has been in use by Jews in Iran, Afghanistan and Central Asia for over a millennium. Similar practices had equally been adopted by Jews living in other diaspora communities. Relevant examples include works in Arabic (see my previous post “A Judeo-Arabic serial printed in Bombay”), German, Greek, Italian and Spanish which were written or printed in Hebrew script.  The centuries-long tradition of utilising the Hebrew alphabet for the local language was the diaspora Jews’ manifest way of preserving their identity and their cultural and historical heritage.

An untapped resource hidden in public and private collections, Judeo-Persian works aroused the attention of scholars only in the nineteenth century, and increasingly since the second half of the past century to this day. The nineteenth century witnessed the appearance of erudite catalogues of significant Hebrew manuscript and printed book holdings in academic libraries, which included also Judeo-Persian material that hitherto had been inaccessible to researchers. Since then there has been a proliferation of scholarly publications, bibliographies, journal articles and exhibitions devoted solely to this area of study.

Our Judeo-Persian collection comprises a variety of texts ranging from biblical translations (tafsir), liturgies, illuminated versified paraphrases of Persian epics and stories, Jewish legal texts such as, for example, sections from Moses Maimonides’ monumental code the Mishneh Torah (‘Repetition of the Law’), divans of Persian and Jewish poetry, dictionaries, glossaries and many more. The earliest collection item dating from the 8th century is a Judeo-Persian trade letter (British Library Or. 8212/166), which the famed British explorer Sir Aurel Stein in 1901 found at Dandan-Uiliq, an important Buddhist trading centre on the Silk Road in Chinese Turkestan. 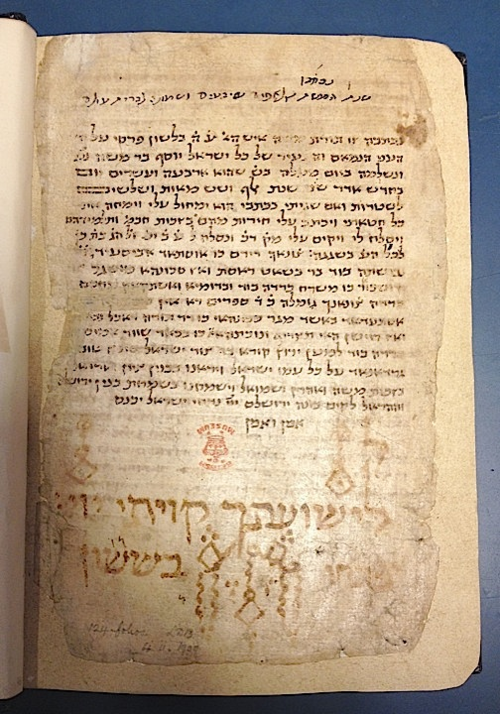 The 1319 handwritten copy of Torat Mosheh  (Or. 5446) in our collection had been unknown in scholarly circles until its acquisition in 1898. It has since been acknowledged as the earliest dated Judeo-Persian text of the Pentateuch.  The manuscript has been copied on paper and has 124 folios; it is imperfect at the beginning and has many lacunae.  For example, the first 2 chapters of Genesis and the whole of Exodus  are missing.  So are chapters from Leviticus and Numbers. Many folios have been bound in the wrong order. The Hebrew colophon on folio 124v was signed  by Joseph ben Moses who states that he had completed copying “This Torah of Moses” on Friday, 24th Adar in the year 1630 of contracts, which corresponds to 15th March, 1319 AD. The name Abu Saʻid is also mentioned in the colophon, but this person’s role is somewhat unclear. Some scholars have argued that Joseph ben Moses was only the scribe, whereas Abu Saʻid was responsible for the Judeo-Persian translation. Others have claimed that Joseph ben Moses was the translator while Abu Saʻid served as his model. 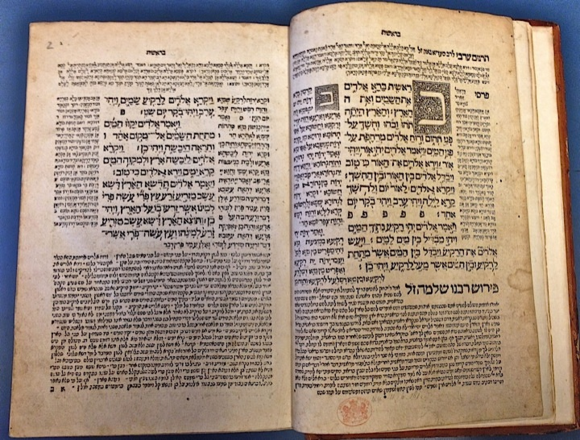 The Library’s Judeo-Persian printed holdings are equally modest, but their rarity more than makes up for their small numbers. Records for these books  are scattered in four printed catalogues, the earliest of which found  in Joseph Zedner’s and Van Straalen’s  - are now accessible on-line. Jacob Tavusi’s  rendition was long regarded as the oldest surviving Judeo-Persian translation of the Bible. The same text transcribed into Arabic script by Thomas Hyde was reprinted in the famed Bishop Brian Walton’s  Polyglot,  issued in London 1655-1657. The realisation that earlier Judeo-Persian translations of the Scriptures pre-dating Tavusi’s had existed already and may have been used by Tavusi as models, came only in the 19th century after the discovery of early Judeo-Persian biblical manuscripts in the Cairo Genizah and the acquisition of Judeo-Persian manuscripts by major European libraries.

Our rare copy of Torat Adonai  is a beautifully crafted specimen boasting a finely decorated title page and handsome woodcuts of initial Hebrew letters.  It  was printed at  the press of Eliezer Soncino, the last member of the famed Jewish Italian family of printers.  The family was named after Soncino, a  town in the Duchy of Milan in northern Italy, where it set up a Hebrew printing-press in 1483. Eliezer worked at Constantinople from 1534 to 1547 taking over the printing branch  his remarkable father Gershom had established there a few years prior to his death in 1533.

Posted by Ursula Sims-Williams at 7:26 PM