The Miscellany of Iskandar Sultan (Add.27261)

Imagine being a position to commission a magnificent one-volume selection of the reading matter you would most like to carry around on your travels – a kind of miniature personal library. With no expense spared, you could order the most skilful calligraphers in the land to write it, the best painters to illustrate it, the best illuminators to decorate it, the best binders to bind it…

Such was the good fortune of Jalāl al-Dīn Iskandar Sultan ibn ‘Umar Shaykh, grandson of the famous Central Asian conqueror Tīmūr (Tamerlane). Iskandar ruled much of southern Iran for just five years (1409-1414) before meeting his death after rebelling against Shāh Rukh, his overlord. Iskandar was an enthusiastic and discerning patron of the arts and learning, and a number of the exquisite Persian manuscripts produced for him have survived. Amongst the most remarkable of these are his two Miscellanies, one of which is preserved at the Gulbenkian Foundation in Lisbon (MS. L.A. 161) and the other at the British Library (Add. 27261), now fully digitised as part of our Digital Access to Persian Manuscripts sponsored by the Iran Heritage Foundation and others. Thanks to a generous grant from the Andor Trust, selected folios from the London volume are now available to view and study, with notes and a number of translated extracts, as a ʻTurning the Pagesʼ presentation. 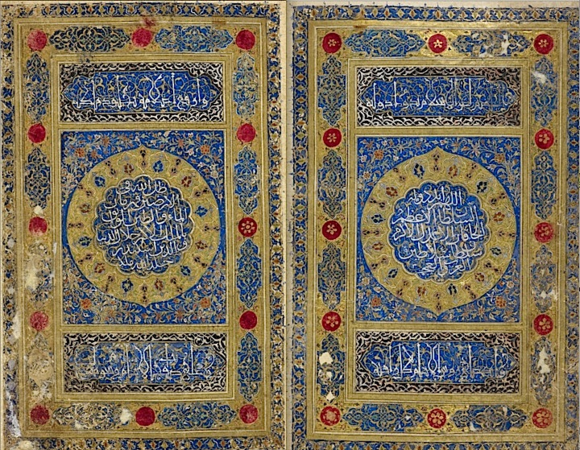 The Miscellanies of Iskandar Sultan, then, are illustrated compendia of texts. Those in the first half of our volume were copied by Muḥammad al-Ḥalvā’ī, and the remainder by Nāṣir al-Kātib; their work is dated 813-814/1410-1411. We do not know who was responsible for the illumination and paintings; but some of the latter are probably by Pīr Aḥmad Bāgh-shimālī, reputedly the greatest artist of his time. Notable features of the book include the small page size (182 x 129 mm.) and writing; exquisitely detailed and inventive illumination; and jewel-like miniature paintings. The manuscript has been skilfully restored by British Library conservators and rebound in traditional Islamic style to open as flat as possible. Because the new binding is undecorated, for ‘Turning the Pages’ the covers from a different manuscript were used instead.

The texts chosen by the royal patron and/or his advisers could hardly have been more miscellaneous. They include a wide-ranging selection of religious, narrative and lyrical poetry; in prose, there are treatises on astronomy and astrology, geometry, medicine, farriery, alchemy, history, and Islamic law. In this ʻTurning the Pagesʼ production we have tried to make a representative selection of the 1092 pages (i.e. 546 folios), in the hope of doing justice, as far as possible, to the quality and wide variety of texts, decorative designs, and images.

A detailed description of the contents is available here. For present purposes, therefore, it will suffice to mention some of their interesting features, with a brief discussion of a few pages by way of example.

The poetical texts in the first half of the Miscellany all consist of parts or the whole of well-known lengthy works in masnavī form (rhyming couplets). 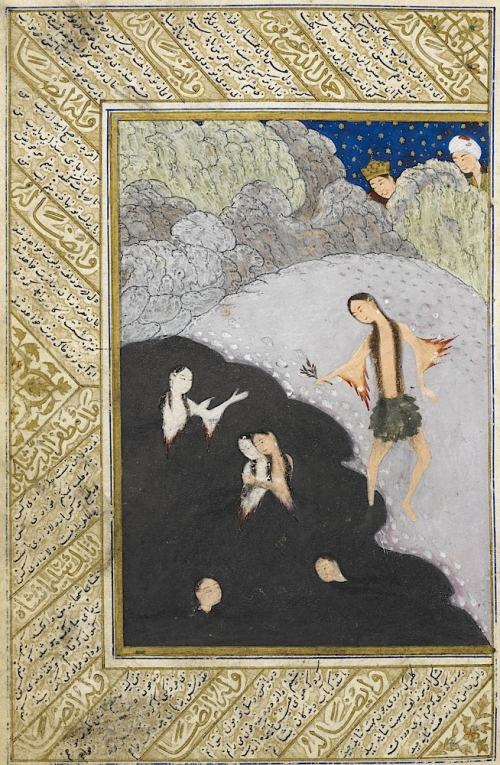 In this miniature, an illustration to Niẓāmī’s Iskandar-nāmah (‘Epic of Alexander the Great’), Alexander and his servant witness the enchanting and innocent spectacle of young girls bathing together at night in a pool out in the wilds. The sophistication of this painting is to some extent disguised by the simplicity of the composition (BL Add.27261, f 286r)

The Miscellany also includes qaṣīdas, poems in monorhyme, in praise of the Prophet Muḥammad or the Imams of the Shī‘a. Others are technical tours de force, single poems incorporating as many different metres or rhetorical devices as possible. Next comes a selection of over two hundred poems in the shorter ghazal form. This is complemented by a more extensive anthology, occupying the outer text panels of almost three hundred pages. Categorised variously by subject, genre or metre, it contains ghazals and other poems by over three hundred authors. Famous contributors include Farrukhī, Manūchihrī, Nāṣir-i Khusraw, Salmān-i Sāvajī, Amīr Khusraw, Ḥāfiẓ (one of the earliest known textual sources), and ‘Imād-i Faqīh. These last two both feature in a previous blog posting: see Jahangir’s Hafiz and the Madrasa Jurist. Others are little known today; whether their verse was fashionable in 8th/14th century southern Iran, and what criteria were applied by the compilers of Iskandar Sultan’s two Miscellanies would be an intriguing topic for literary historians to investigate.

As for the prose contents of Add. 27261, their subject areas have been enumerated above. The inclusion of a summary of jurisprudence according to the Ja‘farī school (mazhab) followed by Imāmī (Ithnā-‘Asharī) Shī‘īs is another indication, coupled with the above-mentioned poems in praise of the Imams, of interest in Shī‘ism at a time when the great majority of Iran’s population was Sunnī. There is also a concise guide to sacred law pertaining to religious obligations attributed (even though it is in Persian) to Abū Ḥanīfa, main founder of the (Sunnī) Ḥanafī juristic school.

Ā’īnah-’i Sikandarī, a treatise on alchemy named after Iskandar Sultan, was written expressly for him, as was Risālah-’i Kibrīt-i aḥmar (‘Red Sulphur’), on the same subject. Mukhtaṣar dar ‘ilm-i Uqlīdis. ‘Elements of Geometry’, presents some theorems from the first book of Euclid’s work, complete with illuminated geometrical figures and adorned with illuminated margins incorporating verses in praise of a patron and here doubtless intended for Iskandar Sultan. Here is an example: 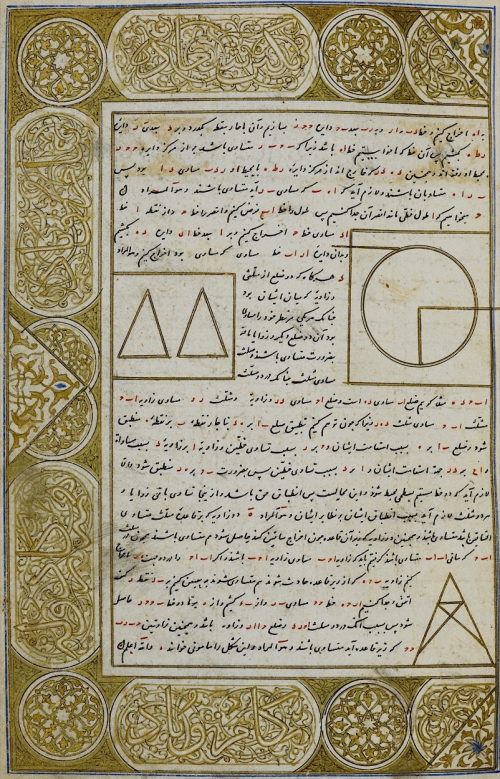 Finally, a large proportion of the second half of the Miscellany is devoted to astronomy and astrology. This fact, coupled with the magnificent illuminated ‘Horoscope of Iskandar Sultan’ (now preserved at the Wellcome Institute, just half a mile along Euston Road from the British Library) suggest that the Sultan had a strong interest in such matters. The computation of calendars and the use of the astrolabe are described in Ma‘rifat-i taqvīm va usṭurlāb. Lastly, some of the 340 pages devoted to Rawẓat al-munajjimīn, a comprehensive early treatise on astrology, are enlivened by colourful, imaginative and exotic drawings in the margins. At the end of the copying process some blank pages remained, and it appears that at least one artist was literally ‘given carte blanche’ to decorate them in any matter he wished. 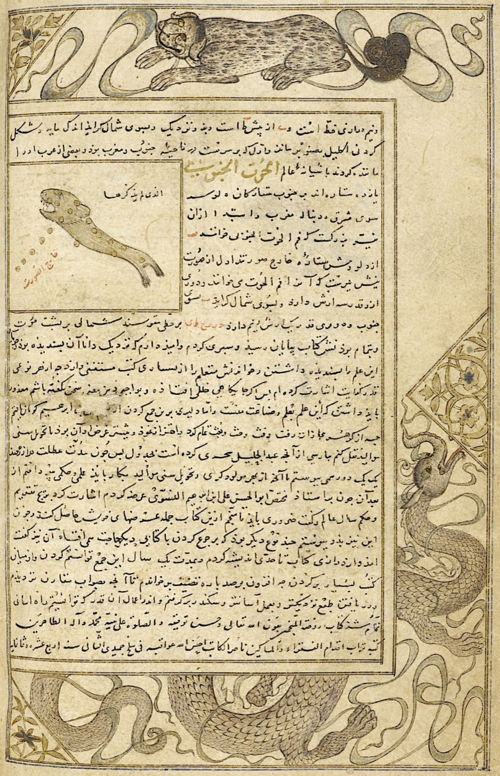 Who decided what to put into the Miscellany? Did Iskandar choose for himself, or did others help? The manuscript has sometimes been described as a kind of encyclopaedia, but even with the contents of the Lisbon volume added, one would not only have a few subject areas covered; there is an abundance of great imaginative poetry but little practical information. If asked to design a ‘Swiss knife’ book for a Sultan, I think I might include some of the following (besides the poetry and jurisprudence): a cookbook; guides to hunting and to edible plants; at least as much geography as history; a primer of navigation by land and sea; a concise multilingual phrasebook; and prayers, passages from Scripture, and other words of wisdom and consolation for hard times. (The British Library has a kind of miniature miscellany compiled by the novelist George Eliot.) In any case, as a great bibliophile Iskandar must have been a happy man when the Miscellany was first presented to him for inspection. We hope you too will enjoy exploring the ‘Turning the Pages’ version of the Miscellany of Iskandar Sultan – and, perhaps, choosing what you would put in your Miscellany.

For a detailed catalogue description with links to the individual works and paintings see Description of Add. 27261.

Posted by Ursula Sims-Williams at 6:46 PM