The Khamsah of Nizami: A Timurid Masterpiece

One of the best loved of the illustrated Persian manuscripts in the British Library is the Khamsah of Nizami Or. 6810. Made in Herat during the reign of Sultan Husayn Bayqara, and with one picture dated 900/1494-95, it contains some of the finest late 15th-century painting. The glorious colour and meticulous drawing of its illustrations strike the viewer immediately, while the depth and complexity of their meaning is endlessly fascinating. In addition the manuscript poses interesting problems of artistic attribution and patronage. 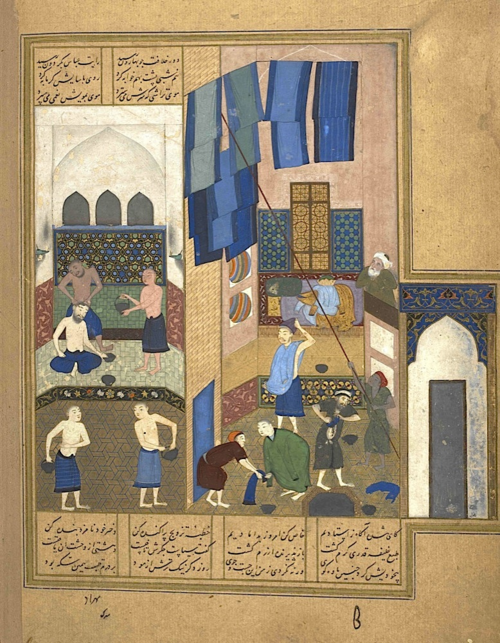 Illustrating a parable in Makhzan al-Asrar (‘Treasury of Secrets’), the first of the five books of the Khamsah, ‘Harun al-Rashid and the barber’ takes us inside a hammam (‘bathhouse’). We are well and truly inside since the plain doorway in the right marks the entry to an area of privacy, or relative privacy.  In its main saloon, men, with their gaze politely directed away from each other, are dressing or undressing with proper decorum. To the left is a more private space, its status is expressed in a more stately architecture: this is for the moment reserved for caliphal use. In it Harun al-Rashid is the direct object of attention of two attendants, and appears to have engrossed the activity of two more. This space is the focus of the narrative: the viewer’s eye has been led towards it from right to left, according to the reading direction of the Persian script. The text tells us that when Harun visits the hammam the barber who shaves his head asks for the hand of his daughter in marriage. Harun is incensed by this impertinence, which is, moreover, repeated on his subsequent visits.  Harun puts this problem to his vizier, remarking that it seems unwise to subject oneself to the double threat of an actual razor and a dagger-like word. The vizier speculates that the barber’s presumption might result from his standing over a treasure: the caliph should order him to move his position. Harun acts accordingly; standing on a different spot, the barber no longer feels himself the caliph’s equal; excavation reveals the treasure over which had been beneath his feet.

Over and above the requirements of the narrative, the depiction of the hammam is the gift that the artist makes to the viewer. There are minutely observed practical details such as the soot deposited on the walls by the lamps in the private room, or the precise position of hands that wring a wet towel in the public space; and there is the symbolic detail that the caliph’s robes and crown are temporarily laid aside, so that in a sense he becomes a vulnerable man on a level with the others. There is careful observation and judgement in the use of colour: the dark buff tiles of the floor are evidently not glazed, so that even when wet they will not be slippery; their colour is beautifully set off by the array of blue towels of varying stripe that blazon the function of the establishment, and that are secured into the main composition by the rod that lifts them to or from the drying line.

Is this picture the work of the great painter Bihzad? The names of both Mirak, the older master, and of Bihzad have been written underneath it at an unknown date, but the majority of scholars would attribute it to Bihzad. Writing in 1605, the Mughal emperor Jahangir, then in possession of the manuscript and priding himself on his connoisseurship, asserted that 16 of its pictures were by Bihzad, five by Mirak, and one by ʿAbd al-Razzaq, though he did not specify which (See earlier post: ‘A Jewel in the Crown’). 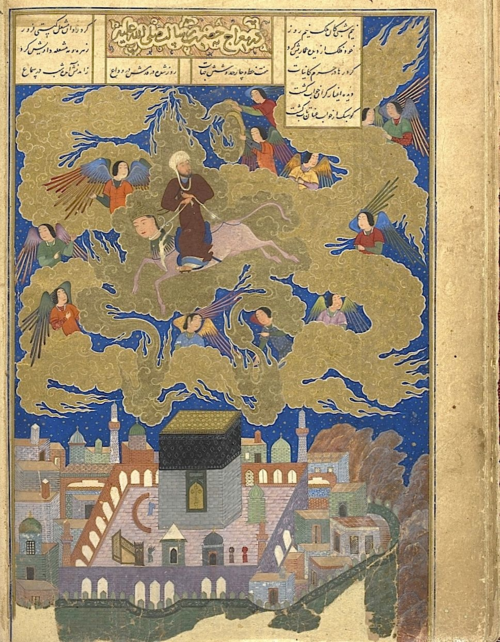 The Prophet mounted on the Buraq and escorted by angels passing over the Kaʻbah (BL Or.6810, f. 5v).

One of the pictures to which no notes of attribution have been added is the ‘Miʿraj’ (‘ascent’), the picture of the Prophet Muhammad carried up into the heavens on the back of the Buraq, a mount with a human face—the Buraq’s face suggests the work of Mirak, the other faces less so. The Prophet is seen in a swirl of golden clouds and surrounded by angels, against a night sky. He is above the black-draped Kaʿbah, with the town of Mecca around it treated in fascinating detail, albeit in a rather persianate architecture replete with blue and turquoise tiling. The picture follows the type of one produced some 80 years earlier in the Miscellany for Iskandar Sultan BL Add. 27261 of 1410-11 (see earlier post: ‘The Miscellany of Iskandar Sultan’). The later picture has, however, two brilliant innovations. The Prophet is here looking around him in wonder, and the precinct of the Kaʿbah contains two human figures that are so tiny that the viewer seems to look down on them from an immense height. 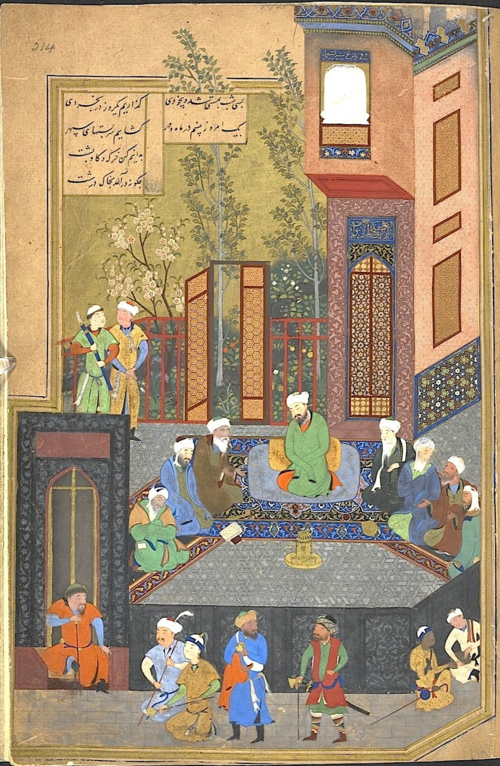 This magnificent manuscript clearly draws upon the talents of artists of the royal workshop, but it does not display the name of Sultan Husayn Bayqara, who ruled Herat from 1469 to 1506, as patron, instead a line on one of the arches of Shirin’s palace (f. 62v) says that it was made for the Amir ʿAli Farsi Barlas, and it seems that he is depicted in the frontispiece. Nevertheless, it is beyond doubt that it is Sultan Husayn Bayqara who appears, in proxy portraiture, in illustrations to the story of Iskandar (Alexander the Great), as an ideal king, surrounded by philosophers (above) or showing respect for a holy man (below). 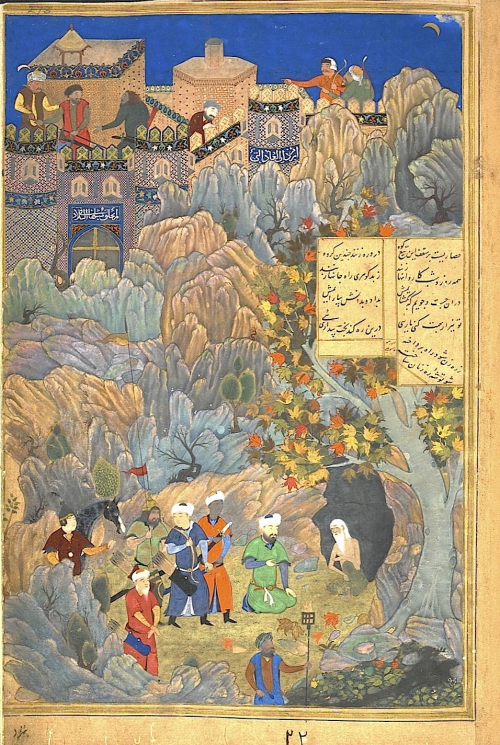 Iskandar, in the likeness of Husayn Bayqara, visiting the wise man in a cave. Ascribed to Bihzad underneath, but to Qasim ʻAli in the text panel. (BL Or.6810, f. 273r).

Thanks to the generosity of the Barakat Trust this manuscript has been fully digitised and can be viewed in our digitised manuscripts viewer (click here Or.6810). Follow this link for a detailed catalogue description with links to all of the miniatures.