In a previous post (April 2014), I looked at the first three paintings in this album and explored the connections between the Maratha court in Poona and Jaipur artists.  The remaining five paintings in the album are all from a large Hyderabad-type series of the Rasikapriya, the classic text by Keshavdas on Hindi poetics that the author wrote at Orccha in 1594 for Kunwar Indrajit Singh, the brother of the ruler Raja Ram Shah of Orccha (1592-1605).  Although a literary work, it was written in the context of the Vaishnava revival in northern and western India in the 16th century.  Keshavdas took the love of Krishna and Radha out of the pastoral settings of the Gita Govinda and placed it in a courtly ambience.  He used their relationship to explore all the different kinds of literary heroes and heroines and the erotic sentiment (sringara rasa) in all its variety.

A complete set of illustrations to this text involves several hundred paintings.  Our album contains only five such paintings. If there were more, their whereabouts is not now known.   Originally the Hindi verses were inscribed in nagari in a separate box above the paintings and text and paintings were contained within gilded and coloured ruled lines, but for some reason the original text panels were cut out and replaced with other panel pasted down from the reverse.  The remains of the tops of the original aksaras are visible only on folio 7.  The pictures are not particularly specific and their subjects could apply to many of the verses and situations in the text.   On the reverse of each folio are inscribed brief Hindi labels for the subject of the painting taken from Keshavdas together with a number different from that associated with the relevant verse in its chapter in the printed editions, and a written out Persian numbering.  As noted in the earlier post, all the paintings were at some time removed from their original album pages and let into European paper frames.

Two of the paintings (ff. 4 and 8) have an oversize Krishna as the hero or nayaka, wearing a tall golden crown, which serves to locate the provenance of the paintings as southern, as do the large white palatial buildings in the background which resemble those in the Johnson Hyderabad Ragamala in the British Library of c. 1760 (J. 37, Falk and Archer 1981, no. 426).  The style of the paintings will be discussed later after dealing with the subject matter.  The inscription on the reverse is here taken as the title of the painting.  For the complete text and translation of the verses of the Rasikapriya, along with numerous examples of their illustrations, see Dehejia 2013. 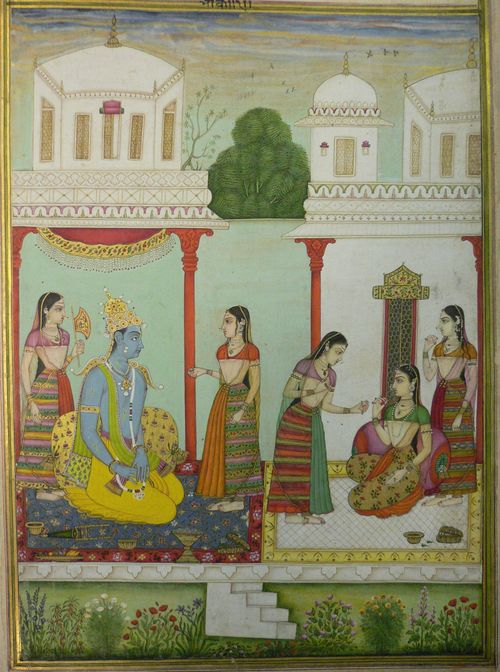 The verses on folio 4 come from the conclusion of the opening chapter, in which Keshavdas makes some general remarks about the emotion of romantic love and its two major varieties, love in union and love in separation.  Keshavdas divides his descriptive verses into ‘open’ (prakasa) or clear and ‘hidden’ (prachanna) or more suggestive.  Here the sakhi (confidante) has been to see Krishna and describes him to Radha:  ‘He is totally unresponsive and has stopped eating and drinking.  All of Braj is concerned about him and you are sitting here unconcerned.  Get up and do something about it.  This is the result of his longing for you.’  The artist shows Krishna sitting mournful and unresponsive in one pavilion while the sakhi tries to talk to him and then she goes off to find Radha, who is meant to be some way away in another pavilion. 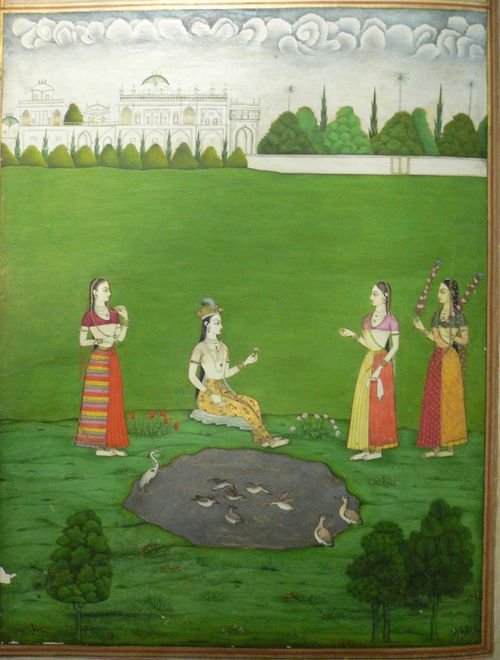 The term on the reverse of folio 5, ajnata yauvana, a youthful maiden unaware of her own flowering, comes not from the Rasikapriya but from Bhanudatta’s Rasamanjari, an earlier work in Sanskrit on the same topic.  Similarly the verse above our painting is not found in Keshavdas’s work, where the relevant verses (3, 20-21) speak about a navayauvana mugdha nayika, a maiden newly grown to adolescence.  Their purport is the same:  her waist is slimmer, her hips have expanded, her gait is more steady but she does not know why this should be so.  Chapter 3 of the Rasikapriya deals with the different types of heroine or nayika, which are classified in various ways.  The artist shows the maiden sitting by a pool populated by ducks in an extensive meadow while her confidante tries to reassure her about what is happening to her body. A girl standing with flower wands perhaps signifies her impending marriage.   In the distance is a white palace set beside a garden. 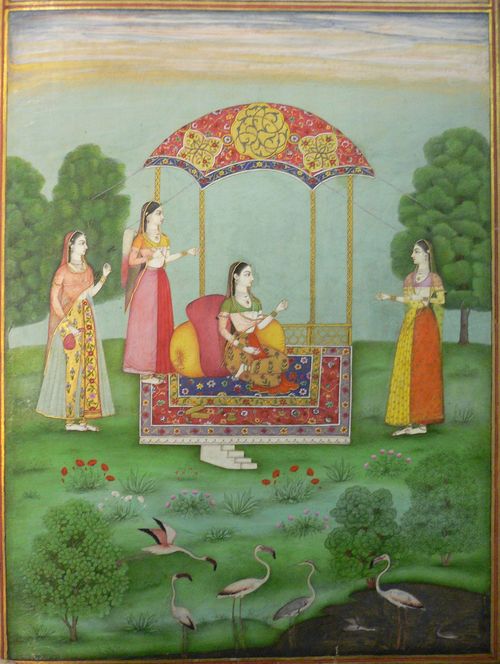 The verse for this painting comes from the fourth chapter, on how lovers meet:  in person, through a portrait, in a dream or through hearing the other’s name.  Radha chides her sakhi for speaking of Krishna for she does not know what to do now that Krishna is so enshrined in her heart.  The artist shows Radha sitting under a canopy with her friends in a meadow with what appear to be flamingos in a pond in the foreground. 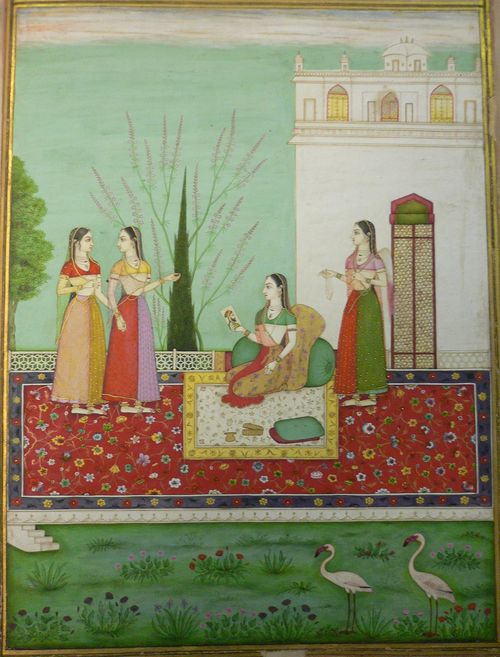 From the same chapter 4, the nayika can ‘meet’ her lover through seeing his portrait.  Radha’s mind was filled with love on seeing her beloved’s portrait, but her shyness caused her to tremble.  She is shown holding a portrait and sitting on a carpeted terrace with her friends in front of a palace with flamingos again in the foreground. 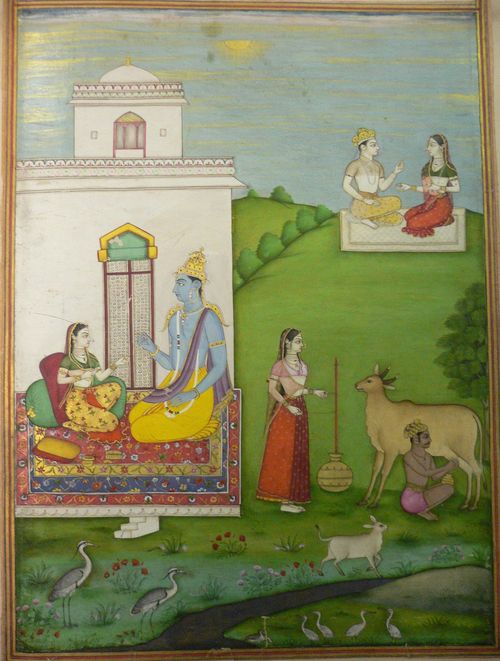 In chapter 3, heroines can be mugdha, madhya or praudha (adolescent, experienced or mature).  The madhya heroine is subdivided various ways, of which one is according to the way she speaks to her lover, which can be dhira, adhira or adiradhira (firmly, harshly or scoldingly).  Here the heroine is unable to restrain her indignation at her lover’s fickleness and speaks harshly to him with words capable of two meanings: “Your body is like that of your father [for just as he shakes on account of old age so do you tremble for fear that your secrets will be out].  In strength you resemble your brother Balaram [for just as he is intoxicated with wine you are intoxicated with love].  Your face is like your mother’s [she has a tilak on her forehead and you have a love mark] and just as her mind is full of motherly love you are infatuated with thoughts of love.  Your temperament is stable like that of the earth [for you are able to sustain the frailties of others].  Your mind is restless like the wind and pure like water.  Your mouth [on account of chewing betel] is red like fire.  As is the sky full of space and sound, you who are dark as the cloud and your words that speak of your misdeeds prevail in every home.  Like Rati [the consort of Kamdev] is your love [for separation torments you as it affected her].  Your form is pleasing like that of Rati’s lord.  Tell me, Lord, how did you learn to speak such lies?” (adapted from Dehejia 2013, p. 60).

The artist sets the scene in the countryside with a pavilion in which Radha is upbraiding Krishna for his fickleness.  Beside the stream with its birds and flowers in the foreground a cowherd is milking a cow, with a gopi standingready to churn the milk into butter, while on the hill in the background a prince, presumably meant to be Balarama as he is white, is sitting with a woman.  The latter reference is easy to pick up, although there is no sign of wine, but the pastoral activity in the foreground is possibly a reference to Krishna’s being like the earth.

The style of the five paintings in our album relates to eighteenth century Hindu Hyderabadi painting, in which Krishna wears the tall crown typical of that style. 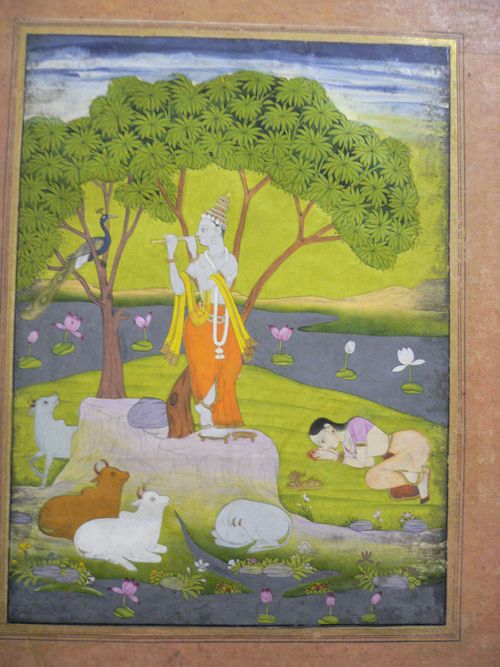 See Falk and Archer 1981, no. 472iv for another example of this style.  Some of the most important paintings from 18th century Hyderabad are found in a group of Ragamala sets, of which Richard Johnson’s album in the British Library J.37 is typical. 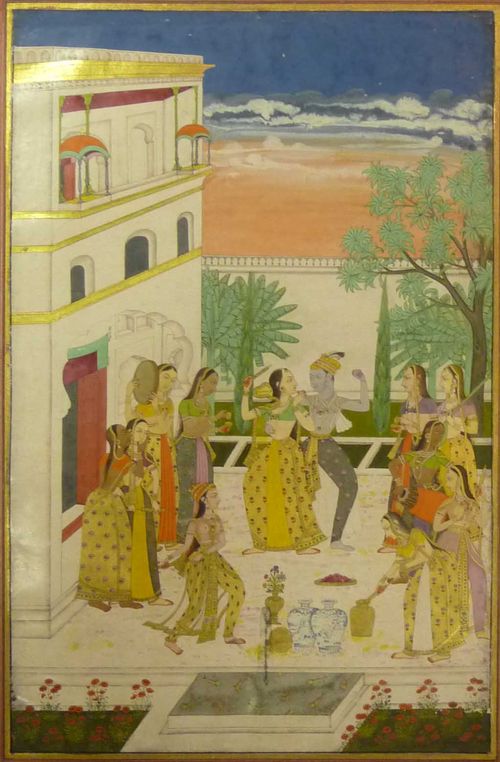 Exquisite figures male and female disport themselves on palatial terraces or in idyllic visions of the country.  This fine set of 36 paintings was collected by Johnson during his appointment as Resident at the court of Nizam ‘Ali Khan in Hyderabad from 1784-85.  Nizam ‘Ali (1762-1802) was a patron of music, poetry and painting and Johnson apparently came to know him well, since he was constantly espousing the Nizam’s interests as against those of his superiors in Calcutta which resulted in his early recall.  These sets are famous among other things for their perspective views of architecture with semi-naturalistic vanishing points, in contrast to our album paintings where all the buildings are viewed frontally.  Nonetheless it is possible to see the resemblances in the architecture:  the white chunam-covered buildings tend to have a tall ground storey with smaller pavilions on top.  The beautiful canopied pavilion on folio 6 is also found several times in the Ragamala set.  Yet the treatment of landscape, flowers and birds do differ, for here in the album the artist is very free.  By the 1760s the Hyderabad landscape style was turning harder with conceptualised hills and meadows criss-crossing each other to suggest depth, while our artist takes a more naturalistic approach to recession, as in the exquisite meadow of folio 6 and in the various naturalistic clumps of flowers as opposed to the regimented rows in the Ragamala.  More open landscapes were a feature of Deccani painting in the first quarter of the 18th century (see Zebrowski 1983, ch. 11) and it is at the end of that period that our five album paintings seem best placed.  Bold distortion of forms in our album as in the overlarge Krishna figure, the tiny steps and minuscule foreground trees are all features found in the earlier style. Only one other painting has so far been identified as related to the style of our five paintings, showing a prince seated on a carpet amidst flowers and miniscule trees in a meadow leading back as in f.5 of our set to white palatial buildings on the horizon.  This was formerly in the William K. Ehrenfeld collection in San Francisco (Ehnbom 1985, no. 36, where it is called Golconda, 1660-70) and its whereabouts is not now known.

As to the set’s patron, the fall of Bijapur and Golconda to Aurangzeb in 1686-87 released many of their artists for patronage elsewhere, as is well known for various Rajput courts, but many others stayed locally to work for the local nobility of the former Golconda kingdom as well as for Mughal or Rajput patrons depending on their appointments to positions within the new Mughal subahs of the Deccan.  Aurangabad (now in western Maharashtra) remained the principal Mughal capital in the Deccan and even Asaf Jah, the first Nizam of the newly independent Hyderabad state from 1724, was based there before his successors moved the capital to Hyderabad.  This distinctness from Hyderabad proper is perhaps reflected in the Hindu costume of skirt, bodice and orhni worn by nearly all the women as distinct from the more Muslim costume (paijama and peshwaj) of the Hyderabad Ragamala sets done later under Nizam ‘Ali’s patronage.  A provenance from Maharashtra would thus put the five paintings within the orbit of the Peshwas based at Poona and link them to the other three paintings in the album.