A rare Vietnamese map of China

One of the most interesting Vietnamese manuscripts in the British Library, Bắc Sứ Thủy Lục Địa Đô or, in Chinese, Beishi shuilu ditu, ‘The northwards embassy by land and water from Hanoi to Beijing’ (Or. 14907), has just been digitised. Written in the Vietnamese language in Chinese characters (chữ Hán) and dated 1880, the manuscript is a complete visual record of the route from Bắc Thành (the former name of Hanoi under the Nguyễn Dynasty) through China to Beijing, taken by envoys of the Vietnamese Emperor Tự Đức (r.1847-1883) on their tribute-bearing mission in 1880. This work was probably created as an archival record of the journey. Roads, mountains, waterways, bridges, buildings, cities and towns are all clearly depicted, as are the points of departure and arrival on the first and last pages. The title, written in Chinese characters (Beishi shuilu ditu), also includes the date (gengchen) of the journey, according to the Chinese 60-year cyclical system. The annotations on each page list place names and distances in Chinese miles (li or ly in Vietnamese) with occasional useful notes, such as ‘from here merchants used only Qianlong money’. Land routes are marked in red ink and water routes are recorded in blue ink. 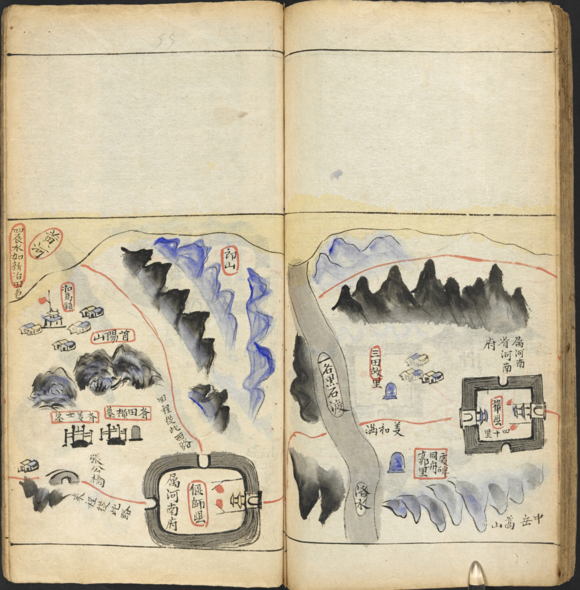 Towards the end of the 19th century Vietnam was faced with serious threats from French colonialism. After taking South Vietnam (Cochin China) in the 1860s, the French gradually fulfilled their territorial desire to occupy the rest of the kingdom.  In January 1874, after another defeat, the court of Emperor Tự Đức had to sign a treaty with the French which led to the occupation of North Vietnam. Under this treaty, Vietnam ‘s foreign policy was under the control of French colonial power. However, Vietnam still kept up its tradition of sending tribute missions to China.

The tribute system was employed in Chinese foreign policy for many centuries before its collapse at the end of the 19th century under the Qing dynasty (1644-1911). As the most powerful kingdom in East and Southeast Asia, China saw herself as ‘the Middle Kingdom’ and demanded that smaller and ‘inferior’ kingdoms in the region send her tribute on a regular basis. Small states in the region willingly sent tribute missions to Beijing, while not viewing this tradition as acknowledgement of vassalage to China; on the contrary, it was perceived as a reciprocal system, whereby Beijing was accepted as the patriarch of other, inferior, kingdoms. Once their missions had been received by the court in Beijing, recognition by China gave rulers of smaller kingdoms legitimacy to rule. The tribute system also provided security and political stability for smaller kingdoms against invasions from China so long as they did not implement any policy which would disturb the Middle Kingdom. 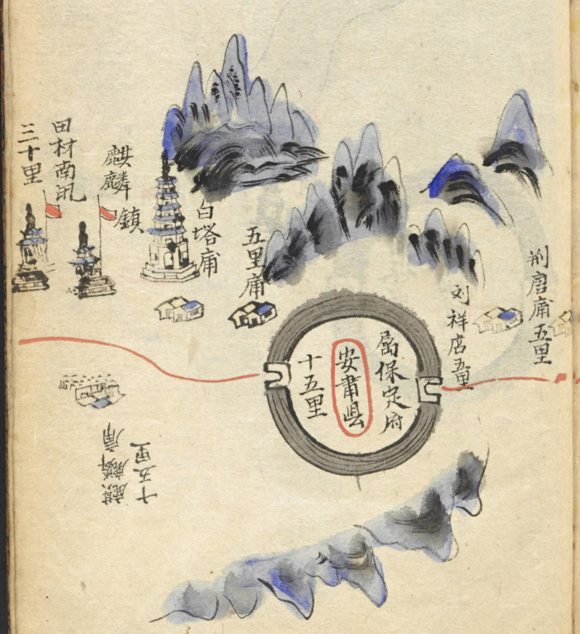 Arriving at Ansu Xian County in Hebei Province, north of the Yellow River, their route took them through temples and the White Pagoda. British Library, Or.14907, f.66r.

As a neighbouring country, Vietnam had been one of the most active participants in the Chinese tribute system, which offered political gains allowing for peaceful co-existence with its powerful neighbour. As Brantly Womack points out, China was always Vietnam’s greatest political threat. Thus Chinese recognition of the Vietnamese court as the legitimate rulers of the country was invaluable and was tantamount to an acknowledgement of Vietnam’s right to exist.   In contrast to the colonialism of Western imperialism, China acted as the passive guarantor of a matrix of unequal but autonomous relationships, rather than as an active metropolitan power: to go to Beijing was more reassuring than to have Paris come to you (Womack 2006: 135).

From its very beginnings, not only did independent Vietnam publicly accept its status as a vassal, but it sent its most prominent scholars as emissaries on tribute missions.  William Duiker has characterised the historical relationship between China and Vietnam as follows: ‘To China, the Vietnamese must have resembled a wayward younger brother … Chinese attitudes toward Vietnam combined paternalism and benevolence with a healthy dose of arrogance and cultural condescension stemming from the conviction that it was China that had lifted the Vietnamese from their previous state of barbarism. As for the Vietnamese, their attitude toward China was a unique blend of respect and truculence, combining a pragmatic acceptance of Chinese power and influence with a dogged defence of Vietnamese independence and distinctiveness’ (Duiker 1986: 6). 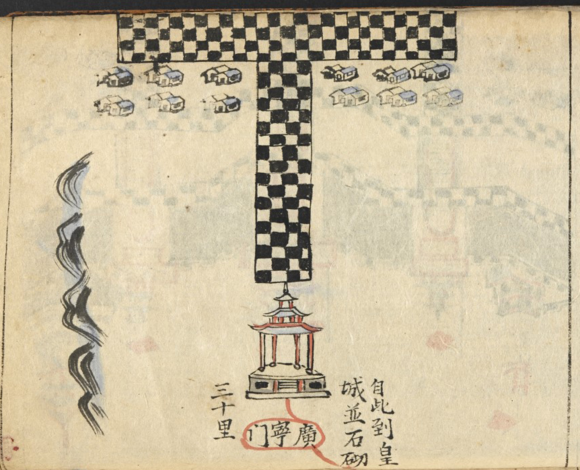 The 1880 tribute mission took place against a backdrop of political difficulties in Vietnam. After the signing of the 1874 treaty, there was unrest in North Vietnam (Tonkin) among Vietnamese who saw the Nguyễn rulers as weak leaders who had readily capitulated to French power. The Black Flag rebellion, led by Lưư Vinh Phục, caused disruption to foreign commercial businesses and French religious missions, disturbing both Beijing and Paris. Hence two Chinese incursions took place in 1878 and 1879, while at the same time, the French kept putting pressure on the court in Huế with the threat of another invasion (Đinh Xuân Lâm 1999: 47). In order to appease the Chinese and to seek help from the Middle Kingdom, the Vietnamese court tried to send missions to Beijing.  Some missions were successful, but others were intercepted by the French. The 1880 tribute mission was therefore one of several attempts. It probably crossed the border in early October and arrived in Beijing in December 1880. 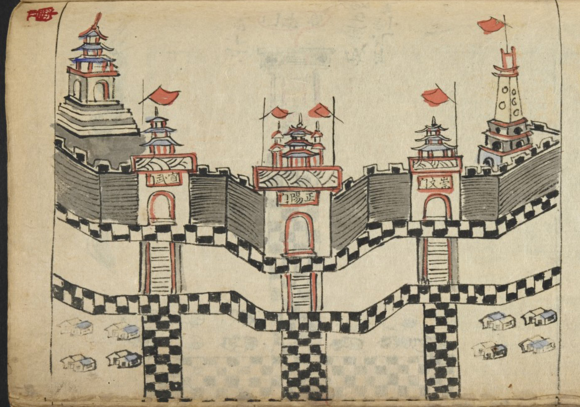 The French perceived the Vietnamese court’s attempt to seek help from China as a violation of the 1874 treaty, which stipulated that Vietnam’s foreign affairs were under French authority. The colonial power thus used this as one of the pretexts to launch another attack against the Vietnamese. In April, 1882, French forces attacked Hanoi and consequently Huế. Emperor Tự Đức passed away on July 17, 1883 just before the court agreed to sign another treaty with the French (August 25, 1883), which brought all three parts of Vietnam under complete control of French colonial government.

The advent of French control over Vietnam seriously affected Chinese interests because trade between southern China and northern Vietnam was disrupted. Therefore, from 1882 China sent troops to northern Vietnam to protect its interests and fighting between French and Chinese forces erupted. However, the weakening Qing dynasty was not able to match the French might. The confrontation ended with Tientsin Agreement in May 1884 (Đinh Xuân Lâm: 1999, 58), in which China agreed to rescind its claims over Vietnam’s sovereignty. This also brought an end to the long-lasting tradition of the tribute system between China and Vietnam.

The manuscript Or. 14907 has been fully digitised and can be viewed here.

With thanks to Baohe Chen for help in reading the Chinese inscriptions.

Posted by Annabel Gallop at 5:53 AM