An early Malay letter from Brunei

In the sixteenth century the kingdom of Brunei was one of the most powerful Malay states in Southeast Asia, its influence extending along the whole of the north coast of the island of Borneo and as far northwards as Manila bay. In time its grip over neighbouring polities was greatly curtailed by its rival Sulu to the east, and by European colonial powers such as the Spanish in the Philippines and, in the nineteenth century, various British enterprises in Borneo: the Brooke dynasty of ‘White Rajahs’ in Sarawak, and the Chartered Company in Sabah. 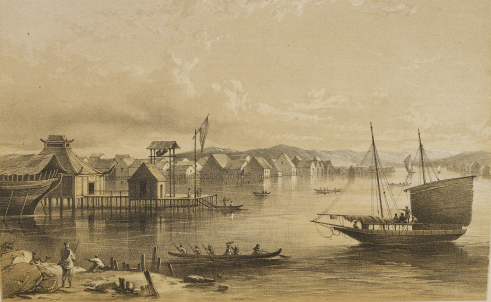 An early Malay letter from Brunei held in the British Library (Harley Ch 43 A 6) which has just been digitised attests to a period when Brunei’s fleets still sailed far beyond the shores of Borneo.  The letter was sent from the Raja Bendahara Paduka Seri Maharaja Permaisuara of Brunei to ‘Senyor Kapitan Inggeris’, the head of the English trading settlement at Jambi, on the east coast of Sumatra. The letter accompanied an embassy from the sultan of Brunei led by three senior officials – Seri Laila Diraja, Seri Setia Pahlawan and Seri Raja Khatib – to the court of Jambi, with a request to purchase sendawa, saltpetre (an essential component of gunpowder) and kain gabar, blankets.

Although damaged and torn, currently laminated with gauze and possibly missing part of the sheet of paper which may have contained a seal, the letter may be partially dated from its historical context. Lured by pepper, the English East India Company had arrived in Jambi and established a ‘factory’ or trading post in October 1615. This lasted until 1679, when the factory was burned and its captain killed in the attack on Jambi by Johor. The ruler of Jambi named in the letter as ‘Pangiran Adipati’ was probably Pangiran Dipati Anum, who reigned under that title from 1630 until 1661, when he took the title ‘Pangiran Ratu’ on the accession of his son as ‘junior ruler’. The letter was therefore most likely written some time in the mid-seventeenth century, between 1630 and 1661. 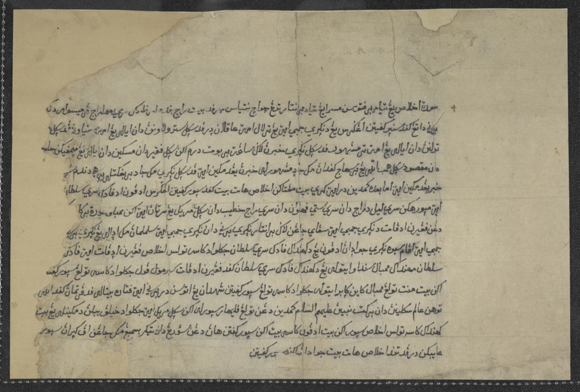 Letter from the Bendahara of Brunei to the English captain at Jambi, mid-17th century. British Library, Harley Ch 43 A 6.

The relative antiquity of this Malay letter has long been recognized, and in 1898 it was discussed, edited and translated by W.G. Shellabear in his important article ‘An account of some of the oldest Malay MSS. now extant’. Shellabear was hesitant to read the toponym in the letter spelt b-r-n-y as Brunei, so distant from Jambi, and suggested it might refer to ‘the neighbouring kingdom of Birni’. In fact, as first proposed by Amin Sweeney (1971), there is no reason to doubt that this letter is from Brunei (not least for the reason that no references at all can be found to any state in east Sumatra named ‘Birni’). Although the title Bendahara for the most senior court official after the sultan is found in many Malay states, it is usually qualified with honorifics that help to locate it precisely, and the form 'Bendahara Paduka Seri Maharaja Permaisuara' is unique to Brunei. Indeed, the typically Brunei use of medial alif in Permaisuara instead of the more commonly encountered Permaisura is another indication of Brunei origin, and even Shellabear himself acknowledged that the spelling membali (m.m.b.a.l.y) for the more usual membeli (‘to buy’) reflected Brunei pronounciation. Moreover, the three embassy officials named in the letter all bear recognizable Brunei titles.

Shellabear also thought it strange that Brunei would venture so far to buy goods from the English more easily procurable from the Spanish. And yet for much of the 17th century Brunei's relations with the Spanish were hostile – in 1647 there was a joint Brunei-Dutch expedition against the Spaniards (Nicholl 1989: 189) – thus making trade with the Spaniards highly unlikely. Shellabear’s other main reservation, in view of the physical distance between Brunei and Jambi, was the description in the letter of the two states being ‘as if they were one country’ (upama sebuah negeri jua adanya). But such complimentary similes are not unusual in Malay letters, and more pertinently, a similar phrase is also used in a Brunei letter of 1821 from Sultan Muhammad Kanzul Alam to William Farquhar, British Resident of Singapore: kerana kepada pikiran beta akan kedua buldan itu esa tiada ada antaranya maka jadilah keduanya umpama satu hamparan, ‘For to my mind our two states are as one, with nothing to separate them, like a single mat’ (Gallop 1995: 224).

Like two other early Malay manuscripts in the British Library from the Sloane collection, this letter – from the Harley library of the first Earls of Oxford – was present at the foundation of the British Museum in 1753.

Posted by Annabel Gallop at 5:52 PM