In an earlier communication we informed our readers about a far-reaching 3-year project funded by the Polonsky Foundation, which aims to digitise 1250 Hebrew manuscripts held at the British Library, making them available to a global audience (Opening up the Hebrew collection).
The first 45 Hebrew manuscripts that went live on the Library’s Digitised Manuscripts site last April (45 Hebrew manuscripts go digital) included chiefly Hebrew Bibles, such as the supremely significant London Codex dating from c. 9th century (Or 4445), and the elegant Golden Haggadah a medieval Passover liturgy sumptuously illuminated in Catalonia in the 14th century (Add MS 27210).

Detail of a miniature of the second plague, of frogs from the 'Golden Haggadah', Spain, 2nd quarter of the 14th century (British Library Add Ms 27210, f 12v)

Our devoted followers will be pleased to learn that our recent upload broadens the scope for discovery and research even further with over 300 Hebrew  manuscripts now online. The manuscripts included in the latest ingest present a wider diversity of subjects, thus, apart from Bibles and biblical commentaries, one will find liturgies, manuscripts of the Talmud (large corpus of Jewish law and tradition; includes the Mishnah and the Gemara), Talmudic commentaries, midrash (rabbinic commentary on the Hebrew scriptural text) and halakhah (the legal component of Talmudic literature).

There is additionally a greater variation of languages. Though a fair number were written in Hebrew, languages such as Aramaic, Arabic and Judeo-Arabic (Arabic in Hebrew characters) are well represented. A good example of a Judeo-Arabic manuscript is Or 2220, a commentary on the Mishnaic order Mo’ed (Festivals) by the illustrious Jewish sage Moses Maimonides (1138-1204) which was penned in the 15th century in Yemen. Noteworthy too are the handwriting styles employed in these handwritten books, with square, semi-cursive and cursive Hebrew scripts peculiar to the geographic areas the scribes originated from. Add MS 26992, Tikune ha-Ri”f, a legal work by Abraham ben Shabbatai Del Vechio (d. 1654) written apparently during his lifetime, provides a fine example of an Italian cursive type of Hebrew writing. A Sephardi semi-cursive Hebrew hand can be identified in Harley MS 5719, a 15th century manuscript copy of the Mishneh Torah (Repetition of the Law), the legal code Maimonides composed between 1068 and 1078 while living in Fustat (Old Cairo), Egypt. Or 2220 mentioned earlier provides a good specimen of a semi-cursive Yemenite hand.

Among the uploaded manuscripts there are significant Karaite biblical commentaries and Karaite works dealing with religious legal matters that will form the subject of a future blog. For a full list of the manuscripts that are now online, please follow this link (Hebrew digitised mss_November 2014). Note that if the hyperlinks don't appear to work, you should refresh your browser.

The present upload features a considerable number of decorated and illuminated pieces representing all the schools of Hebrew manuscript painting that thrived in Europe between the 13th and 15th centuries. A beautiful two-volume Bible with subtly coloured illuminations is a telling example of Hebrew manuscript art that developed in Italy in the last quarter of the 13th century. 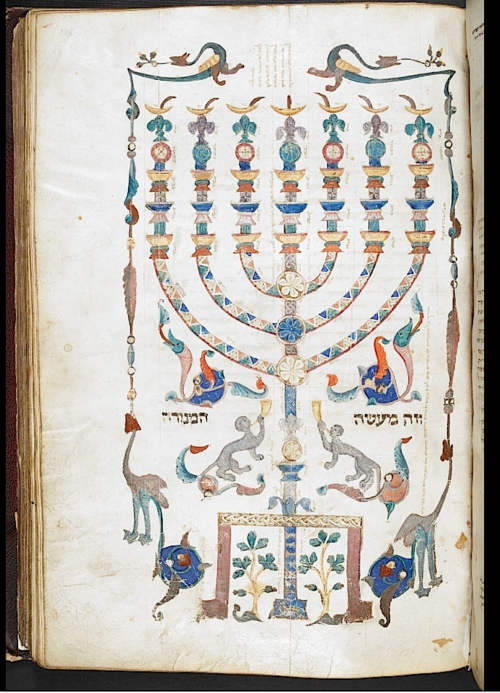 A splendid example of the art that developed particularly in Southern Germany in the Lake Constance area during the 14th century is found in the Tripartite Mahzor, a festival prayer book for Shavu’ot (Festival of Weeks) and Sukkot (Feast of Tabernacles). This is in fact the second volume of a three-volume manuscript. Volumes one and three are kept respectively in the Library of the Hungarian Academy of Sciences, Budapest (Kaufmann Collection MS A384) and in the Bodleian Library, Oxford (MS Michael 619).

Historiated word panel depicting Moses, at left, receiving the Tablets of the Law on Mount Sinai, with Aron and the Israelites standing in prayer. Trumpets and rams’ horns pierce through the clouds, marking the occasion. The gilded word Adon in the centre of the panel opens the liturgical poem ‘The Lord has taken care of me’ which is recited during Shavu’ot, a festival celebrating the giving of the Torah to the Israelites. Germany, c.1322 (British Library Add MS 22413, f. 3r)

An additional specimen from the German school of Hebrew illumination is the beautifully executed Coburg Pentateuch which was produced c. 1396. Beside the Five Books of Moses (the Torah) it comprises the Five Scrolls, Haftarot (weekly readings from the Prophets) and grammatical treatises. The text of the Pentateuch was penned in an Ashkenazi square script by a master scribe named Simhah Levi, while the vocalization was done by Samuel bar Abraham of Molerstadt. The other textual parts in the codex were penned and vocalised by other scribes. King Solomon, famed for his justice and wisdom is depicted seating on a throne shaped like the roof of a building. At his feet there are several animals, most likely hinting at his ability to converse with the animal kingdom. Coburg, Germany, c. 1396 (British Library Add MS 19776, f. 54v)

A magnificently illuminated codex crafted in France in the 13th century is the North French Hebrew Miscellany. It was written by Benjamin the Scribe, whose name appears four times in the manuscript. The absence of a colophon has led scholars to assume that the scribe wrote the manuscript for his personal use. This was common practice among medieval educated Jews who often copied important Hebrew texts for their own libraries. There are eighty-four different groups of texts in this codex including dozens of poems, the liturgy of the entire year, calendars, and the earliest complete Hebrew version of Tobit. According to scholarly research the 49 full-page miniatures depicting biblical characters and narratives were executed by Christian artists attached to three major contemporary Parisian ateliers. 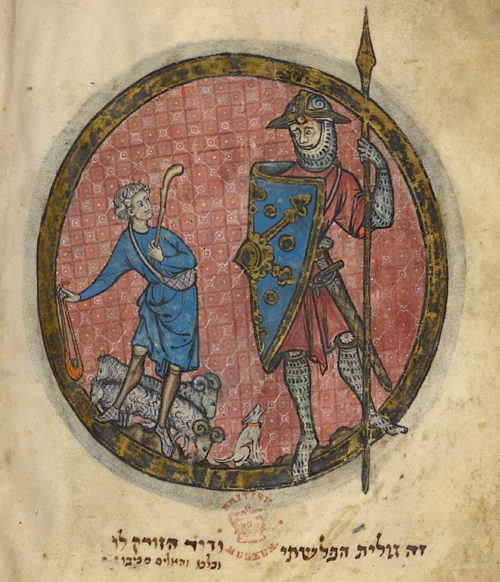 From the Portuguese school of Hebrew manuscript painting comes the Lisbon Bible, a three volume manuscript which was copied by Samuel ben Samuel Ibn Musa for Joseph ben Judah called Elhakim in 1482. The finely painted illuminations enhanced by gold leaf were executed by a team of skilled craftsmen in a Lisbon workshop which was active for the three decades preceding the expulsion of the Portuguese Jewry in 1497. The manuscript was sold to the British Museum in 1882, but nothing is known about its location and owners after 1482 until the year it was purchased by the British Museum. Beginning of the Book of Genesis with foliate motifs and Masoretic notation outlined in micrography. Lisbon, 1482 (British Library Or 2626, f. 23v)

The uploading process is on-going and by the end of this month users and researchers everywhere will be able to access digitally 400 out of the 1250 manuscripts included in the project. Please watch this space for details of the next batch of Hebrew handwritten books due to go live in the next few weeks!

Posted by Ursula Sims-Williams at 12:12 AM