Artistic visions of the Delhi Zenana

Three interesting portraits on ivory of Mughal ladies of the imperial zenana were acquired by the Visual Arts section in 2012, now numbered Add.Or.5719-5721.  All three were mounted in one frame with pasted down inscriptions below relating to the subject and the artist, while attached to the back of the frame were three envelopes which once contained the miniatures and which were written further particulars.  The paintings were sold in Delhi in these envelopes in 1900 by Sultan Ahmad Khan, who styles himself the son of one painter Muhammad Fazl Khan and grandson of another painter Muhammad ‘Azim, both of whom are named as artists in the inscriptions.  The purchaser must have put them into their present gilt frame and fortunately also preserved the various inscriptions and attestations.  All three are supposed to be portraits of some of the wives of the Mughal Emperor Akbar II (r. 1806-37).  For a more correct appreciation of who they might be, we rely on that invaluable on-line resource, The Royal Ark.  None of these ladies’ names unfortunately appears among the numerous wives of Akbar II, but that does not necessarily detract from the validity of the inscriptions of artistic interest. 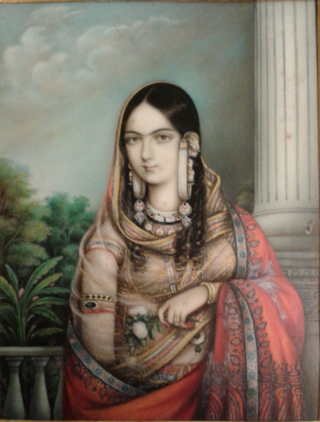 The first portrait is a half-length of a Mughal lady facing the viewer holding a rose and draped in a red Kashmiri shawl, standing on a terrace with a column and balustrade behind overlooking the trees of a garden.  It is inscribed on the front: Portrait of Shaukat Begum of the harem of Akbar II.  Painted by Mohammed Aizim.  Original picture guaranteed by his grandson Sultan Ahmed Khan.  And on the back: Original picture by Mahommad Aizim artist who died about 1850.  Picture of Shaukat Begum of the harem of Akbar II. Sold and guaranteed by Sultan Ahmed Khan son of Mohommud Fuzul Khan & grandson of Mahomud Aizim Delhi 25 Jan 1900.  The details of the guarantor are also noted in Urdu.  The naturalistic viewpoint and the general setting of the portrait are of course derived from British portraits of the early 19th century which by this time had been seen in Delhi in considerable numbers.  What the Delhi artists contributed is their exquisite refinement of features and of details of clothing and jewellery.

There seems to be no Shaukat Begum listed among the wives of Akbar II.  However, Nawab Shaukat Sultan Begum Sahiba is listed as a daughter of Mirza Mahmud Shah, the second son of Mirza Babur (1796-1835), who was the seventh son of the Emperor Akbar II.  A very similar portrait on ivory but in an oval frame is in the V & A (IS.529-1950, Archer 1992, no. 259/7), where it is thought to be dated 1860-70, one of a set of portraits depicting Mughal ladies, all unfortunately without inscriptions.  For the artist, see below. The second of these images is an oval bust portrait of a lady holding a kitten.  Her loose hair is dressed in a rather European manner and she has no veil covering it.  It is inscribed on the front:  Portrait of Aktar Mahal Persian wife of Akbar.  Painted by Mahommed Faizul artist Delhi about 1825.  And on the back: Painted by Mahomed Fuzal portrait of Persian wife of Akbar [damage A]ktar Mahal.  Portrait is painted by Mohommed Faizal painter Delhi.  Zoolfkar Khan miniature painter Delhi [this last seems to be an attestation].  Nawab Akhtar Mahal Begum Sahiba is listed as the eighth wife of Akbar’s son and successor the Emperor Bahadur Shah Zafar (r. 1837-58), whom he married in 1847.  She was previously a concubine named Man Bai, which seems to be reflected here in her pose and attire.  Rather than the traditional format as seen in the other two portraits, the artist has been influenced by a more sentimental type of Victorian portrait.  Muhammad Fazl is not an artist about whose work anything is presently known. 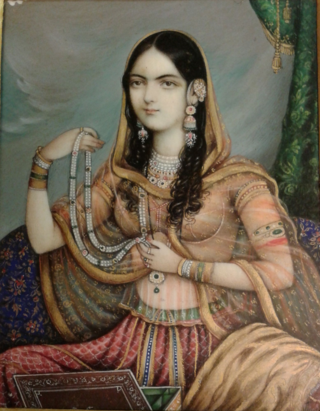 The third portrait is a half-length of a lady seated before a large cushion holding a necklace of pearls which she has taken from a jewel box.  Behind her are the standard curtain drape and the sky without an intervening balustrade.  It is inscribed in front:  Portrait of Asrafat Mahal wife of Akbar.  From original by Mahommed Faizul by his pupil Amiruddin.  And on the back: Picture of Ashrafat Mahal copy of original copied by Amiruddin pupil of Mahomed Fuzal son of Mahomud Aizim who died about 1850 [with the same guarantor’s details in English and in Urdu as Add.Or.5719 above].  A Nawab Sharafat al-Mahal Begum Sahiba [Moti Begum], a Sayyidani, is listed as the third wife of the Emperor Bahadur Shah Zafar.  She was the mother of Mirza Mughal (1817-57), one of Bahadur Shah’s sons most active in the events of 1857 and who was one of the princes shot by Major Hodson on 22 September 1857.  Again the artist’s name is unknown.

Delhi artists in the first half of the 19th century were catering to a voyeuristic market and many imperial Mughal ladies from Nur Jahan onwards had iconographies set by these artists in this period.  Their features scarcely change from lady to lady – here Shaukat Begum and Sharafat Mahal look very alike with their pale oval faces, long dark hair and similar eyes, noses and mouths – and these features were also used for portraits meant to be of Mumtaz Mahal, Akbar II’s favourite wife and mother of his favourite son Mirza Jahangir, and were continued in portraits meant to be of Zinat Mahal, the favourite wife of the Emperor Bahadur Shah Zafar (r. 1837-58).  Earlier Mughal ladies were also given the same treatment – see Archer 1992 pp. 218-23 for the many examples in the V&A.  Those in the India Office Library’s collections are listed in Archer 1972 (pp. 204-08).  Their numbers have been added to since then and will be the subjects of future blogs.

Sultan Ahmad Khan’s inscription in 1900 tells us that he was the son of the artist Muhammad Fazl Khan, whose name is not otherwise known, and the grandson of Muhammad ‘Azim, about whom we know a lot more.  Emily Eden met this artist when travelling with her brother the Governor-General Lord Auckland to Lahore in 1838-39.  On her return in 1839 with her sketchbook full of portraits of the Sikhs she had met at Lahore, she records:  ‘I have had two Delhi miniature painters here translating two of my sketches into ivory, and I never saw anything so perfect as their copy of Runjeet Singh.  Azim, the best painter, is almost a genius;  except that he knows no perspective, so that he can only copy.  He is quite mad about some of my sketches, and as all miniatures of well-known characters sell well, he was determined to get hold of my book’ (Eden 1866, vol. 2, pp. 73-74).  The other painter is Jivan Ram, some of whose work in both oils on canvas and watercolour on ivory has surfaced in recent years and is the subject of a previous blog post and also of a forthcoming article by the present writer.

Miss Eden’s ‘Azim’ is possibly the same as the artist Shaikh ‘Azim, who produced a portrait on ivory of Kate Ford taken on the occasion of her marriage in 1845, and acquired in 2009.  It is inscribed on a backing sheet in English:  ‘Kate Ford. Taken by Sheikh Azim, Delhi, Nov. 13th 1845’; and in faint Persian in red:  kamtarin-i Shaykh ‘Azim musavvir sakin-i Dihli (‘the insignificant Shaykh ‘Azim the painter, resident of Delhi’).  The sitter is Catherine Margaret Ford, daughter of Major-General John Anthony Hodgson (1777-1848), Bengal Army 1800-48, and Surveyor-General of India.  Born in 1823, she was married in Delhi in 1845 to William Ford (1821-1905), Bengal Civil Service 1843-69.  She is seated dressed in a low cut dark blue gown with a Kashmir shawl draped around her.  Her hair is looped in front of her ears in the early Victorian fashion.  A vase of flowers stands on a table behind her.  All this is in the latest taste for female portraiture. 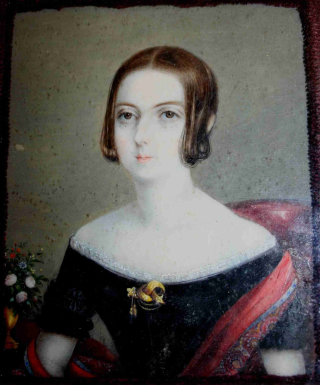 This portrait is in a very different style and although Delhi artists were able to change their style at will to suit their patron’s taste, it is possible that it is by a different artist.  There were several artists with similar names working in 19th century India and further inscriptions need to be discovered on other paintings to verify or disprove this identity.

Eden, Emily, Up the Country: Letters written to her Sister from the Upper Provinces of India, London, 1866