Ibrahim: portrait of a Malay scribe

Thanks to a chance encounter with a Scottish artist in Calcutta in 1810, we are in possession of a rare portrait of one of the Malay scribes responsible for copying a number of Malay manuscripts now held in the British Library. Ibrahim, who was born in Kedah in 1780, was the younger son of Hakim Long Fakir Kandu, a prominent merchant from the south Indian Chulia community. Ibrahim and his older brother Ahmad both worked in Penang as scribes for the British – Ahmad for the merchant Robert Scott, while Ibrahim was employed by Thomas Stamford Raffles. In 1810 Ahmad visited Bengal in the company of Scott, and recorded his impressions in the Hikayat perintah negeri Benggala (Add.12386). By great coincidence, that same year Ibrahim too sailed to Calcutta with his employer, Raffles. At a gathering at Government House on 15 September 1810, Ibrahim caught the eye of Maria Graham: ‘The most singular figure of this motley group was a Malay moonshi, whom Dr Leyden had brought to the assembly’, and her portrait of Ibrahim adorns the frontispiece to her Journal of a Residence in India (1812).  Ibrahim, aged thirty, is portrayed sitting cross-legged wearing a head covering, jacket, shirt and sarong, all made of checked Indian pelikat trade-cloth, with a large pending or almond-shaped belt buckle, holding an octagonal silver tobacco box and with his his keris (dagger) beside him. 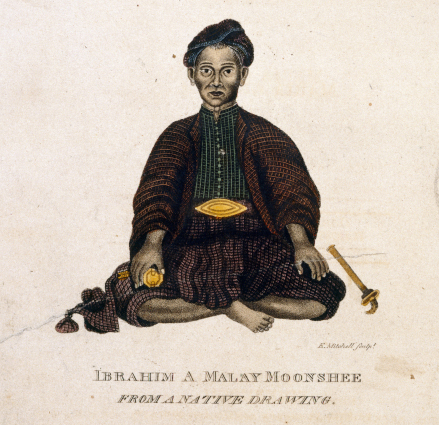 Portrait of Ibrahim in 1810, from Maria Graham, Journal of a Residence in India (Edinburgh, 1812). British Library, V8668, frontispiece.

Raffles had arrived in Penang in September 1805, having studied Malay on the voyage out from England. Probably acting on the advice of his intellectual mentor (and convalescent house guest) John Leyden, around January 1806 Raffles gathered a team of six scribes to copy Malay books for him. Among the Malay manuscripts which have recently been digitised are at least four volumes bearing Ibrahim’s name as scribe. Three specify that they were copied for Raffles, but were evidently presented to Leyden, for they came to the India Office Library in Leyden’s estate in 1824.

The earliest of the manuscripts to mention Raffles's name is a copy of Hikayat Parang Puting (MSS Malay D.3), concerning the adventures of Budak Miskin, son of the princess of Langkam Jaya, one of a few Malay works which according to Braginsky (2004: 72) may best preserve the primordial pre-Islamic 'monomyth' of the sacral cosmic marriage of the male and female principles. 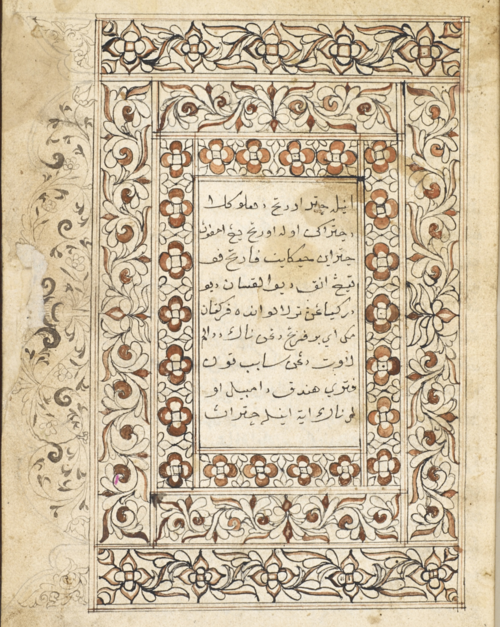 Later that same year, Ibrahim also copied the Hikayat Mesa Tandraman (MSS Malay C.3) for Raffles. Described as a Javanese story, it tells of two divine brothers Sang Dermadewa and Dewa Kisna Indra. The latter became a hermit on the mountain Puspagiri and the former became king of Kuripan.

The third manuscript, Hikayat Isma Yatim (MSS Malay C.5), is a well-known story which may have been a personal favourite of Malay scribes because the hero, for once, is not a prince but a writer.

The fourth manuscript is a copy of the Syair Silambari (MSS Malay B.3), also called the Syair Sinyor Kosta, concerning the conflict between a Portuguese and a Chinese in Melaka over a woman. Written 11 days earlier than Hikayat Parang Puting, it may also have been comissioned by Raffles. 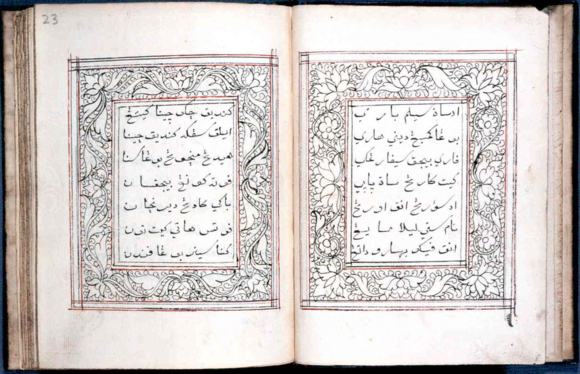 The opening pages of Syair Silambari, decorated with floral borders in pen and ink, outlined in red.
British Library, MSS Malay B.3, ff.22v-23r. 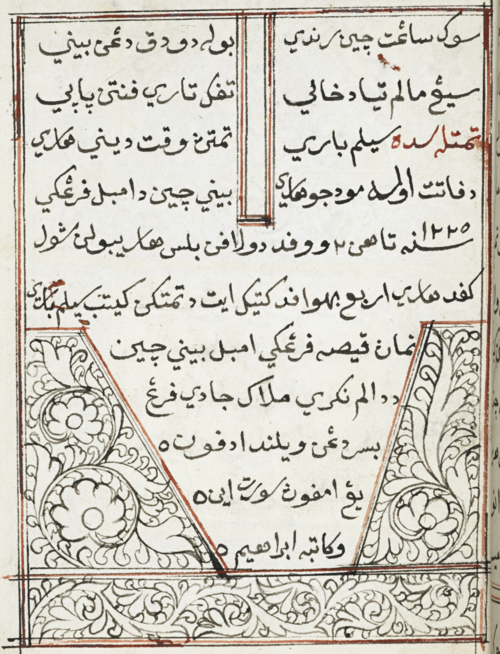 Following on immediately from the copy of Syair Silambari, on the reverse of the same sheet of paper and hence also certainly written by Ibrahim, is another poem in the form of a love letter to a lady, entitled Syair surat kirim kepada perempuan, which may be Ibrahim’s own literary creation. 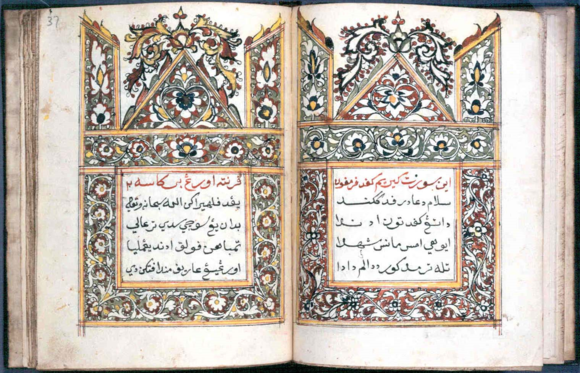 As can be seen from the images above, Ibrahim’s handwriting is very distinctive: his hand is small, neat, round, and upright, without a discernible slope to left or right.  Certain letters which are particularly characteristic are concave/convex tail of conjoined final nga/'ain, and the almost parallel shape of the ‘head’ of the letter-form jim/ca/ha/kha in its isolated position, as seen in the detail below.

On the basis of the handwriting, it is possible to identify a few more manuscripts in the British Library that may have been (at least partially) copied by Ibrahim, such as a copy of the last chapters of the Hikayat Hang Tuah (MSS Malay B.1) shown below.  In addition Ibrahim is known to have copied two MSS of the Sejarah Melayu now in the Raffles collection in the Royal Asiatic Society (Raffles Malay 35, dated January 1808, and Raffles Malay 39, dated March 1812). 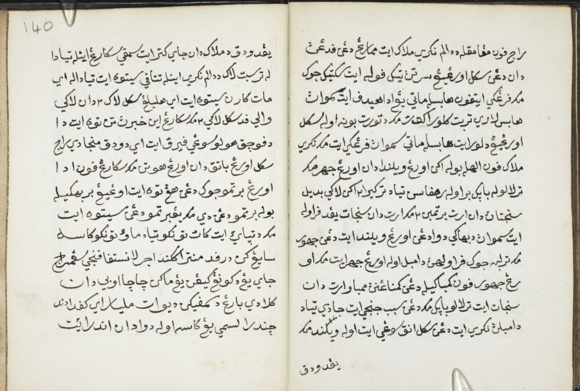 Ibrahim's distinctive letter jim can be seen in the word raja at the start of the top line on the right hand page, and his nga in the word yang on the bottom line of the left hand page, in this MS of Hikayat Hang Tuah. British Library, MSS Malay B.1, ff.139v-140r.

Posted by Annabel Gallop at 1:46 AM

I believe the first 'tahun' relates to the hijrah year immediately preceding the word, while the second 'tahun' refers to the year in the daur kecil 8-year cycle, eg. 'tahun alif', 'tahun wau', etc. The best source on Malay calendrical systems is by Ian Proudfoot, Old Muslim calendars of Southeast Asia. Leiden: Brill, 2006.

Oh wow thanks Annabel! I assumed at first glance that the hijrah year was marked by 'sanat'; and that 'tahun' had shifted in meaning from something else to replace 'sanat' in modern Malay. Will check out Proudfoot.