Historically there has been a close cultural and linguistic relationship between the Tai peoples in Southeast Asia (Northern Thai/Lanna, Lao, Phu Thai, Phuan, Shan, Tai Khoen and Tai Lue, to mention some of the larger groups). Tai groups that have embraced Buddhism have also adopted the tradition of making palm leaf manuscripts. The reputation of the famous Pali school of Chiang Mai, the capital of the former kingdom of Lanna, may have contributed significantly to the spread not only of Buddhism in the area, but also of the making of palm leaf manuscripts and the use of the Tham script. Palm leaf manuscripts clearly play an important role especially for the preservation of Buddhist texts and commentaries, but were also used to record historical accounts and traditional knowledge relating to social values, customary laws, herbal medicine and traditional healing practices, astrology, divination and horoscopes, non-Buddhist rituals and ceremonies, and literary texts (folklore). 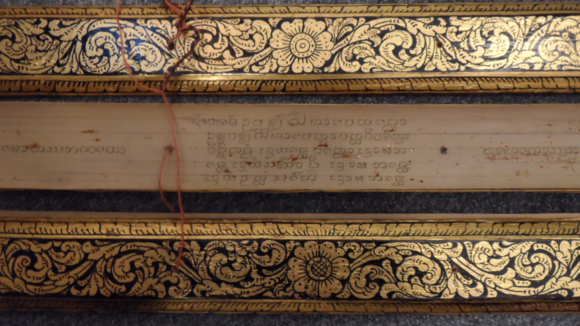 For the production of a palm leaf manuscript, very large fan-shaped leaves from a lān palm (corypha) were cut into a long rectangular shape, soaked in a herbal mixture, then dried or  baked in a kiln, and finally pressed. These fan palm trees were the preferred type in the Northern Thai/Lanna, Lao and Shan manuscript traditions, and are still commonly planted as ornamental trees in temple grounds. The text was usually inscribed with a sharp wooden or metal stylus, then wiped over with a mixture of resin and/or oil and carbon soot to make the writing more visible.

Precious manuscripts or palm leaves containing important texts were covered with two wooden or bamboo boards, which were sometimes left blank, but often they were beautifully carved or decorated. Such covers could be lacquered in red or black, and decorated with gold leaf, mirror glass, mother-of-pearl inlay or even with crystals or precious stones.

Black or red lacquer was a popular material to apply on wooden manuscript covers as it provided good protection against damage by water and humidity. At the same time, the shiny black and bright purple of the lacquer were ideal background colours on which gold leaf or gold paint could be applied. 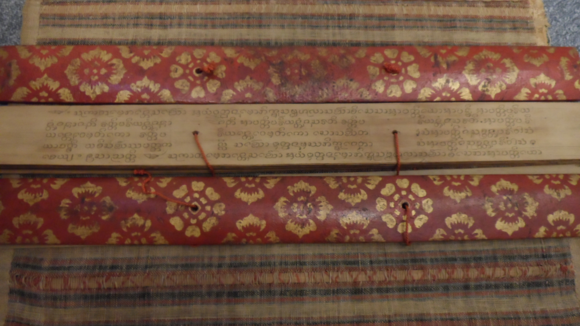 Manuscript in Tham script from Lanna or Laos with red lacquered and gilt bamboo covers, 19th or early 20th century. British Library, Or.16790.

Bamboo strips cut to match the size of the palm leaves were popular covers for manuscripts in Lanna, Laos and among the Shan. The manuscript covers shown above replicate floral decorations made in the stencil technique that can be seen on wooden pillars and beams in many temples in Northern Thailand, Laos and Shan State. This manuscript also has a custom-made wrapper made from cotton with interwoven bamboo strips.

Besides gold leaf or gold paint, other materials were applied on the lacquer as well. Mother-of-pearl inlay was very popular in central Thailand, but it was also adopted in Lanna and Laos due to close cultural relationships and exchange or transfer of Buddhist scriptures.

Rough shells or their parts were cut into platelets of various shapes before inlaid into the lacquer. The production of items with such intricate decorations required special skills and experienced craftsmanship. Traditionally, mother-of-pearl inlay was used in Thailand exclusively for ecclesiastical objects and was under royal patronage until the end of the 19th century. The manuscript covers shown above are thought to have been produced in central Thailand and may have been given to a royal monastery in Chiang Mai.

Another method of decorating wooden manuscript boards was to cover them with black lacquer, then to use a stylus to incise floral ornaments once the lacquer had dried. Afterwards, red lacquer was rubbed on the incisions in order to create a contrasting black and red design. This technique may have been imported into Lanna and Laos from the Burmese and Shan traditions.

Wooden lacquered cover of a Kammavācā manuscript dated 1918 in Tham script from Lanna or northwestern Laos. British Library Or.13157.

To provide additional protection against dust and mould, palm leaf manuscripts were often wrapped in a piece of cloth, which could either be custom-made or simply an unused lady’s skirt, a hand-woven shawl or an imported piece of cloth (for example printed Indian cotton). Custom-made palm leaf wrappers could also be made from local or imported silk. Occasionally such wrappers were interwoven with bamboo strips to provide extra stability for palm leaf manuscripts which had no covers. Another type of manuscript cloth took the form of a long cotton or silk bag that was sewn to match exactly the size of the palm leaves.

Bundles of palm leaves in Tham script with a hand-woven lady’s skirt from northern Laos used as a manuscript wrapper, 19th or early 20th century. British Library, Or.16895.

Posted by Annabel Gallop at 2:02 AM