From Anatolia to Aceh: Ottomans, Turks and Southeast Asia

The British Academy-funded research project Islam, Trade and Politics across the Indian Ocean, which ran from 2009 to 2012 adminstered by ASEASUK (Association of Southeast Asian Studies in the UK) and the BIAA (British Institute of Archaeology at Ankara), set out to investigate all aspects of links between the greatest Middle Eastern power – the Ottoman empire – and the Muslim lands of the Malay archipelago in Southeast Asia over the past five centuries. The project culminated in a conference held in Banda Aceh in 2012, as well as a travelling photographic exhibition produced by the British Library which toured the UK, with a Turkish version which travelled to Istanbul and Ankara, while Indonesian versions were displayed in various venues in Aceh and in Jakarta at the Bayt al-Qur'an & Museum Istiqlal. Now one of two books arising from the project has just been published – From Anatolia to Aceh: Ottomans, Turks and Southeast Asia, edited by Andrew Peacock and Annabel Teh Gallop – as the auspiciously-numbered 200th volume in the series 'Proceedings of the British Academy', published by Oxford University Press. 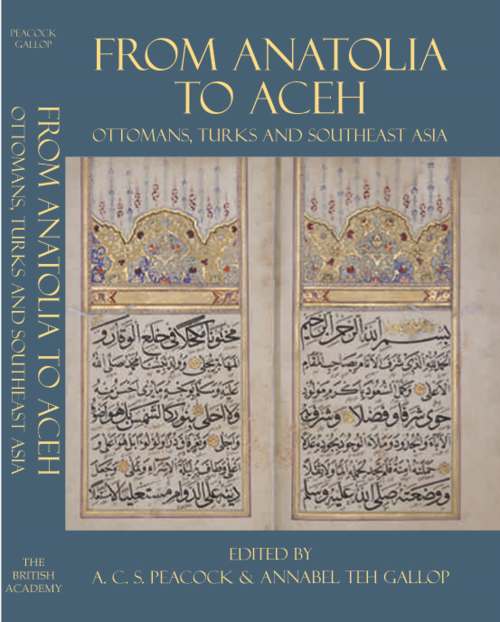 The first direct political contact between Anatolia and the Malay world took place in the 16th century, when Ottoman records confirm that gunners and gunsmiths were sent to Aceh in Sumatra to help fight against Portuguese domination of the pepper trade across the Indian Ocean. In later years the main conduit for contact was the annual Hajj pilgrimage, and many Malay pilgrims from Southeast Asia spent long periods of study in the holy cities of Mecca and Medina, which were under Ottoman control from 1517 until the early 20th century. During the era of European colonial expansion in the 19th century, once again Malay states turned to Istanbul for help. It now appears that these demands for intervention from Southeast Asia may even have played an important role in the development of the Ottoman policy of Pan-Islamism, positioning the Ottoman emperor as Caliph and leader of Muslims worldwide and promoting Muslim solidarity.

The 14 papers in this volume represent the first attempt to bring together research on all aspects of the relationship between the Ottoman world and Southeast Asia, much of it based on documents newly discovered in archives in Istanbul. The book is presented in three sections, covering the political and economic relationship, interactions in the colonial era, and cultural and intellectual influences, with an introduction by the editors and a historiographical survey by Anthony Reid, whose seminal 1969 article, ‘Sixteenth century Turkish influence in western Indonesia’ (Journal of Southeast Asian History, 10 (3): 395-414), could be seen as the starting point for modern research on this topic. A full list of the contents of the volume can be found here: Download 00_Anatolia to Aceh_i-xvi. 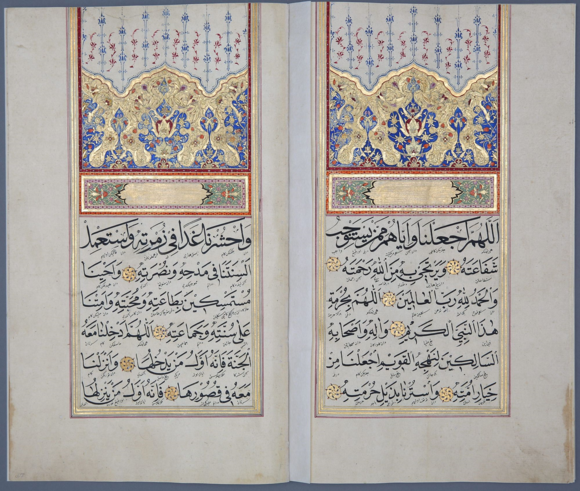 The beautiful manuscript which adorns the front cover of the volume exemplifies well the myriad interactions documented in the volume: it was copied in Mecca by a Malay calligrapher from the 'Jawi' community of Southeast Asians resident in the Hijaz, and adorned with late Ottoman-style illumination. It is a copy of the Mawlid sharaf al-anam, ‘The birth of the noblest of mankind’, an anonymous compilation of devotional prayers on the Prophet, and the Arabic text is accompanied by a small interlinear translation in Malay. The scribe is named as Ibrahim al-Khulusi ibn Wudd al-Jawi al-Sambawi, his nisba indicating his origins on the island of Sumbawa in eastern Indonesia. 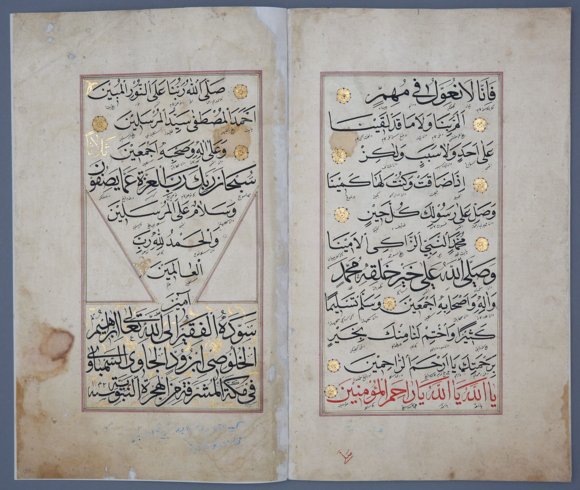 Although the colophon gives the date (in thinly-inked numerals) of 1042 AH (1632/3 AD), this is most likely erroneous and numerous factors indicate that the manuscript was probably copied in the mid-19th century. By coincidence, among the documents in the Prime Ministry Ottoman Archives ((Başbakanlık Osmanlı Arşivi, BOA) in Istanbul relating to Southeast Asia discovered in the course of the research project was an Arabic letter of 1849/50 to Hasib Pasha, the Ottoman Governor of the Hijaz, thanking him for facilitating the Hajj pilgrimage, signed by ten Malay and Yemeni scholars (‘ulama) resident in Mecca. Among the signatories to this letter is one ‘Ibrahim bin Wudd al-Jawi’, whose seal impression reads Ibrahim al-Khulusi ibn Wuddin. Comparing the name ‘Ibrahim’ in the manuscript and the letter leaves little doubt that they were written by the same person. 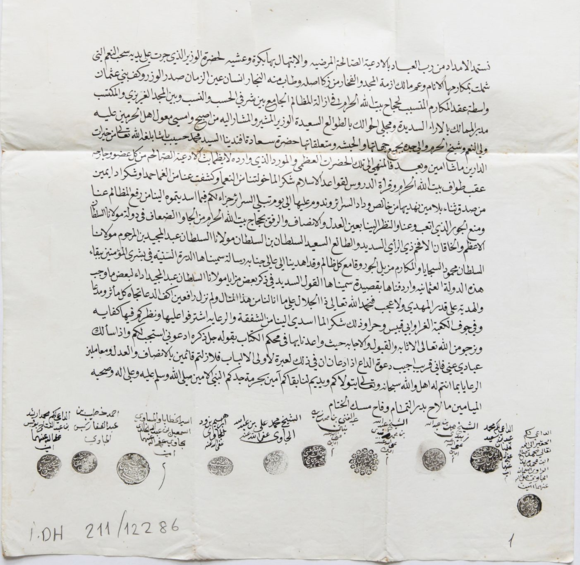 Letter in Arabic from Southeast Asian religious scholars in Mecca to Hasib Pasha, the Ottoman Governor of the Hijaz, 1849/50, with Ibrahim's signature and seal fourth from the left. BOA İ.DH 211/12286. 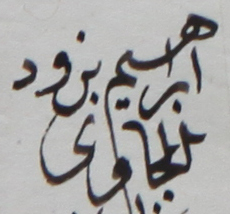 Detail of the signature of Ibrahim (left) in the letter of 1849/50, and (right) in the colophon of Mawlid sharaf al-anam, with the same concave-convex shape of ba-ra, and the letter alif bisecting the ha-ya ligature in both examples.

Further evidence locating this ‘Ibrahim’ as a master Malay calligrapher in the Hijaz in the mid 19th century is found in a letter in Malay and Arabic written in Mecca in 1866 by Abdul Rahman bin Muhammad Saman of Kelantan to Sultan Abdul Hamid of Pontianak on the west coast of Borneo (Islamic Arts Museum Malaysia, 1998.1.3680). In the letter, Abdul Rahman states that he had come to Mecca to study the ‘Istanbul style’ of writing (menyurat Istanbul), and that he is currently being considered the successor to his ‘late teacher Shaykh Ibrahim al-Khulusi al-Sanbawi’ in teaching ‘Istanbul writing’ (patik ini … sudah dilatih? orang besar2 di Mekah akan bahwa patik inilah jadi ganti … al-marhum guru patik tuan Syaikh Ibrahim al-Khulusi al-Sanbawi yang masyhur itu … pada pihak tolong mengajarkan segala muslimin menyurat Istanbulnya). Together, these sources suggest that Ibrahim al-Khulusi died in Mecca probably sometime in the early 1860s.

Ironically, the Ottoman-Malay mawlid manuscript of Ibrahim al-Khulusi only came to light in 2014, well after the completion of the research project, and so is not discussed in the book itself.  (The manuscript is currently held in the Islamic Arts Museum Malaysia in Kuala Lumpur, and we are most grateful to the IAMM and its Director, Mr Syed Mohamad Albukhary, for permission to reproduce the manuscript on the front cover of the book).  But it is just such a discovery as this which raises hopes that, from time to time, yet more new evidence will emerge of the connections between the Ottoman empire and Southeast Asia, across the Indian Ocean from Anatolia to Aceh.

With thanks to Tim Stanley for comments on the illumination.

Posted by Annabel Gallop at 1:41 AM